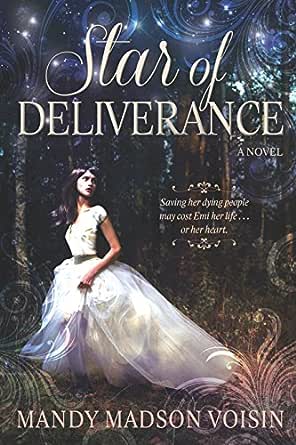 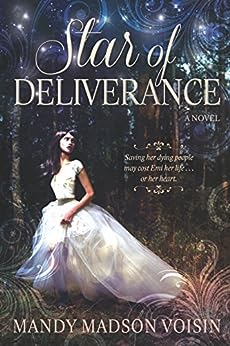 Gr 8 Up—Emi, slave and outcast, is an apprentice healer for her people. Upon the discovery of an ancient disease, Emi leaves her village in search of a cure. Her journey takes her to the place where her people are hated most of all—the capital. Once Emi arrives, she winds up entering a competition to become the bride of the Crown Prince and the capital's next queen. Hoping to use the time to find a cure for the deadly diease ravaging her people, Emi stays in the race, despite the dangers. Star of Deliverance is a fantastical romance with enough mystery to draw in readers. Deeper themes around slavery and human rights are intermingled with this "Cinderella"-like story. A solid pick for YA collections.—Brittney Kosev, Dave Blair Elementary School, Farmers Branch, TX --This text refers to the paperback edition.

4.3 out of 5 stars
4.3 out of 5
25 customer ratings
How does Amazon calculate star ratings?
Amazon calculates a product’s star ratings based on a machine learned model instead of a raw data average. The model takes into account factors including the age of a rating, whether the ratings are from verified purchasers, and factors that establish reviewer trustworthiness.
Top Reviews

Kindle Customer
5.0 out of 5 stars A good story that is totally possible in our world.
Reviewed in the United States on June 8, 2020
Verified Purchase
The setting wasn't in any area of our world, yet the people were such that we fully understand their lives. Well told, my interest was kept through out the whole book. The people and situation was easy to relate to. It was not outlandishly unreasonable.
Read more
Helpful
Comment Report abuse

Anna
2.0 out of 5 stars Disappointing
Reviewed in the United States on March 7, 2019
Verified Purchase
This was not good unfortunately. I really wanted to like it, but the more I read, the more I disliked it. The characters were bland, the story didn't make sense,and it could have seriously used an editor. It's just so full of cliches and poorly written, and believe me, I wanted to like it, but there wasn't much to like. I kind of feel I'm being generous by giving it two stars. Just don't bother with this one. It doesn't get better as it goes along.
Read more
Helpful
Comment Report abuse

Makelle
5.0 out of 5 stars Loved it
Reviewed in the United States on March 30, 2015
Verified Purchase
Great book. It was and fun and easy read with heart break, sorry, joy, and happiness. Good clean read. I would recommend this to all my friends.
Read more
One person found this helpful
Helpful
Comment Report abuse

12chelle
4.0 out of 5 stars Four Stars
Reviewed in the United States on August 10, 2015
Verified Purchase
Everything was perfect accept it needed more romance but other wise I still enjoyed
Read more
Helpful
Comment Report abuse

Rose
4.0 out of 5 stars A wonderfully captivating read, with a strong female protagonist, well-delivered story and romance.
Reviewed in Australia on July 9, 2016
Verified Purchase
The Star of Deliverance to me was similar to the Selection, but I think I enjoyed it more because the protagonist was similar to Yelena from Poison Study.
It follows, Emi, a healer's apprentice living in one of the outlying villages designed to house second-class citizens under servitude in the fictional Deshan. When a young boy is admitted into her clinic with a lethal disease that is potentially spreading among the Savians, Emi sees it as her duty as a healer to enter the Capital to search for a cure, despite the punishment she may face if her slave status is found out.
However when she enters the Capital, she unwittingly becomes part of a program of the nobility, where twenty-one girls compete win Prince Corban's heart and become the next queen of Deshan.
With the threat of death hanging over her as a slave impersonating a noblewoman and her secret pursuit of finding a cure for her people, she finds herself developing a relationship with Prince Corban and a chance to change the lives of her people.

The Star of Deliverance had me constantly flipping the pages with the mixture of court intrigue, the mounting suspicion over her identity and Emi discovering the underlying mystery of the disease. For me, Emi was the star of this book, she was a wonderful protagonist, who was equal parts brave, intelligent and kind, as well as scared, impetuous and reserved. She was a well-balanced character, who was impulsive and rational at the right moments, so there was never a time where I felt like hitting my head against a desk when she got herself into certain situations.
Prince Corban doesn't appear until a third of the way into the book, but I loved reading about his and Emi's encounters. It wasn't an insta-love, but one that begins with initial interest and a romance that develops from challenging each other. I liked seeing how he can at times be a product of his upbringing as a soldier and a upper class citizen, but not one who was unwilling to change.
Can I just say I love Corban's mother? Finally a royal story where there's no evil family member opposing their kid's love interest, but instead chooses to be supportive.

I loved Voisin's cast of characters, they were truly genuine and (except for maybe the villain) there was always a deeper layer to their personality. Even some of the random soldiers, who had there part in persecuting the Savians questioned their actions or had moments of kindness and weren't plain hate-filled, brainwashed minions.
The ending was great, but I feel like more than the plot this story focused more on the characters and how they each inspired change in each other; whether it was Emi's aristocratic best friend, the royal physician or Maddox, the poor orphaned slave boy that Emi initially tries to save.