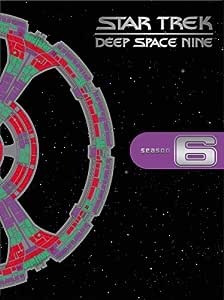 Share
STREAM ANYTIME with Prime Video from $29.99
Have one to sell?
Sell on Amazon

Episodes: A Time to Stand, Rocks and Shoals, Sons and Daughters, Behind the Lines, Favor the Bold, Sacrifice of Angels, You Are Cordially Invited..., Resurrection, Statistical Probabilities, The Magnificent Ferengi, Waltz, Who Mourns for Morn?, Far Beyond the Stars, One Little Ship, Honor Among Thieves, Change of Heart, Wrongs Darker than Death or Night, Inquisition, In the Pale Moonlight, His Way, The Reckoning, Valiant, Profit and Lace, Time's Orphan, The Sound of Her Voice, Tears of the Prophets.

Deep Space Nine's sixth season began ambitiously with a six-part story arc devoted to the Dominion War. This was a brave move in many ways, but a sensible one too. Whereas other sci-fi shows wouldn't commit to showing the impact of war (e.g., Babylon 5), here there were numerous visible sacrifices. Characters were frequently kidnapped and held prisoner, allowing screen time for other members of the ever-growing cast (at its peak there were as many as 18 individuals with speaking roles per episode). This year also introduced the idea of Starfleet Intelligence and its sinister Section 31; alliances were built only to crumble almost immediately; Sisko led a suicide mission and at long last his destiny as the Emissary took a serious turn.

Amid all this sturm und drang the writers felt it necessary to inject some levity. In fact, there was so much comedic sidetracking this year it actually seemed as if they were afraid of the series' dark tone. Witness: Quark undergoing a temporary sex change, leading a Magnificent Seven-style band of Ferengi (with a cameo from Iggy Pop), Morn's nonspeaking character being sorely missed, the blend of Troi and Guinan into '60s crooner Vic Fontaine, and, in one fan favorite episode ("Far Beyond the Stars"), Sisko having visions of himself and the crew as 1950s staff writers on pulp magazine Incredible Tales. There were also cute reconciliations among Worf's extended family (leading to Trek's first cast wedding), and even the revelation of Bashir's genetically enhanced origins quickly became a subject for easy jokes.

Any of these events would have been satisfactorily cute if the war had ended and the show had moved on. But it confused the viewer when every so often the battle would be rejoined mid-episode. The clinching proof that no grand design was really at work was in the sudden exit of Dax. Despite all the jarring humor scattered about after the strong opening, the show seemed unable to avoid reverting to shock tactics for its finale. All of which hardly made the promised final year seem a particularly enticing prospect. --Paul Tonks

Pages with related products. See and discover other items: the magnificent 7