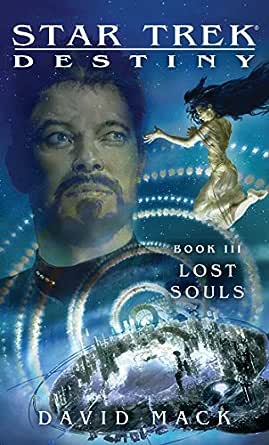 You've subscribed to Star Trek! We will preorder your items within 24 hours of when they become available. When new books are released, we'll charge your default payment method for the lowest price available during the pre-order period.
Update your device or payment method, cancel individual pre-orders or your subscription at
Your Memberships & Subscriptions 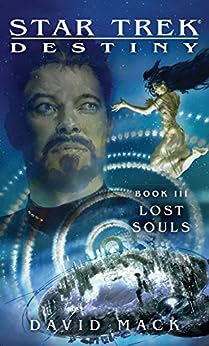 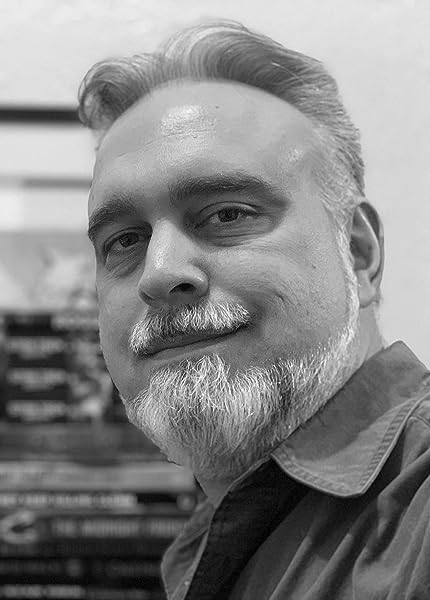 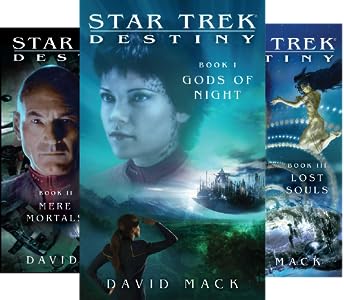 It was the hardest decision William Riker had ever made.

He cast a suspicious glare at Titan's unexpected visitor, a human-looking young woman with a crazy mane of sable hair and delicate garments that showed more of her body than they covered. She had claimed to be Erika Hernandez, the commanding officer of the Earth Starship Columbia, which had vanished more than two centuries earlier, thousands of light-years from the planet where Titan was now being held prisoner. Her tale seemed implausible, but she had offered to help his ship escape, and so Riker was willing to accept her extraordinary claims on faith... at least, until Titan was safe someplace far from here and he could put her identity to the test.

Hers had been a proposition he couldn't refuse, but freeing his ship from the reclusive aliens known as the Caeliar would come at a price: His away team -- made up of most of his senior officers, including his wife, his Imzadi, Deanna Troi -- would have to be abandoned on the planet's surface.

But there was a war raging at home, and above all, he had a duty to protect his ship and defend the Federation. No matter what he did, he was certain his decision would haunt him for a long time to come.

Hernandez snapped into action and took command of the situation. Pointing at the display screen over the science station, she asked curtly, "Who set up this tap on the Caeliar's subspace aperture?"

Hernandez stepped to the console and began entering data. The strange young woman's fingers moved with velocity and delicacy, as if she had mastered the Federation's newest technology ages earlier. "I need to change your shield specs to protect you from radiation inside the passage," she said.

"Our shields already do that," Ra-Havreii said.

"No," Hernandez replied, her flurry of tapping on the console unabated, "you only think they do. Give me a moment." Her hands came to an abrupt stop. "There." She turned and snapped at Riker's acting first officer, Commander Fo Hachesa, "Which station controls onboard systems?"

"Thank you," she said to the stunned-silent Kobliad. Moving in rapid strides, Hernandez crossed to the forward console and nudged Lieutenant Sariel Rager out of her way. "I'm programming your deflector to create a phase-shifted soliton field. That'll make it harder for the Caeliar to shift the aperture on us while we're in transit." She looked across at Ensign Aili Lavena, the Pacifican flight-control officer. "Be ready to go at your best nonwarp speed, as soon as the passage opens. Understood?"

Watching the youthful Hernandez at work, Riker felt superfluous on his own bridge.

"All right," Hernandez announced, "I'm about to widen the subspace aperture into a full tunnel. When I do, the Caeliar will try to shut it down. Be warned: This is gonna be a rough ride." She looked around at the various alien faces on Titan's bridge. "Everyone ready?" The crew nodded. She met Riker's gaze. "It's your ship, Captain. Give the word."

Nice of her to remember, Riker thought. He led Hachesa back to their command chairs. They sat down and settled into place. Lifting his chin, Riker said to Hernandez, "The word is given."

"And away we go," Hernandez said. She faced forward, fixed her gaze on the main viewscreen, and lifted her right arm to shoulder height. With her outstretched hand, she seemed to reach toward the darkness, straining to summon something from the void. Then it appeared, like an iris spiraling open in space: a circular tunnel filled with brilliant, pulsing blue and white rings of light, stretching away to infinity.

Lavena pressed the padd to fire the impulse engines at full power. One moment, Riker heard the hum and felt the vibrations of sublight acceleration through the deck plates; the next, he was clutching his chair's armrests as the ship slammed to a hard, thunderous halt and threw everyone forward.

"More power!" cried Hernandez over the alarm klaxons and groaning bulkheads. "I'll try to break their hold on us!" She closed her eyes, bowed her head, and raised both arms.

Riker had witnessed some of Deanna's psychic struggles in the past, and he knew that whatever Hernandez was enduring to free his ship, it had to be worse than he could imagine. "Give it all we've got!" he bellowed over the chatter of damage reports pouring in via the ops and tactical consoles.

Titan lurched forward, then it was inside the pulsating brightness of the subspace tunnel. Lieutenant Rriarr gripped the side of the tactical console with one paw as he reported, "High-level hyperphasic radiation inside the tunnel, Captain. Shields holding."

That's why she had to modify our shields, Riker realized. Otherwise, we'd all be handfuls of dust by now. Bone-rattling blows hammered the ship. "Report!" Riker ordered.

"Soliton pulses," Rriarr said. "From behind us."

"They're trying to bend the passage and bring us back to New Erigol," Hernandez said. "Keep that soliton field up!"

"Belay that, sir," countered Ra-Havreii. "The gravitational shear inside the tunnel is rising. We have to reinforce the structural integrity field!"

Hernandez shot back, "Do that, and we'll lose control of the tunnel. We'll be taken back to New Erigol!"

"If we don't, the ship might be torn in half," replied the angry Efrosian engineer. Punctuating his point, a console behind him exploded and showered the bridge with stinging debris and quickly fading sparks.

Falling to her knees, Hernandez kept her arms extended and her hands up, as if she were holding back a titanic weight. "Just a few more seconds!" she cried in a plaintive voice.

The bluish-white rings of the tunnel began distorting as the black circle of its terminus became visible. "Lieutenant Rager, all available power to the deflector," Riker said. "That's an order." Another round of merciless impacts quaked the ship around him. "Hold her together, folks, we're almost out!"

An agonized groan welled up from within Hernandez as the egress point loomed large ahead of Titan. She arched her back and lifted her hands high above her head before unleashing a defiant, primal scream.

Outside the ship, in the tunnel, a massive ripple like a shimmer of heat radiation coursed ahead of Titan, smoothing the rings back to their perfect, circular dimensions and calming the turbulence. The shockwave rebounded off the exit ring as the Luna-class explorer hurtled through it.

Energy surges flurried the bridge's consoles, and displays spat out chaotic jumbles. A final, calamitous blast pummeled Titan, and the bridge became as dark as a moonless night. Only the feeble glow of a few tiny status gauges pierced the gloom in the long moments before the emergency lights filled the bridge with a dim, hazy radiance.

Smoke blanketed the bridge, and the deck sparkled with a fine layer of crystalline dust from demolished companels. The deck was eerily silent; there was no sound of comm chatter, no feedback tones from the computers.

"Damage report," Riker said. He surveyed the bridge for anyone able to answer him. He was met by befuddled looks and officers shaking their heads in dismay.

Ra-Havreii moved from station to station, barely pausing at each one before moving on to the next, growing more agitated every step of the way. When he reached the blank conn, he gave his drooping ivory-white mustache a pensive stroke, then turned to Riker and said, "We're blacked out, Captain. Main power's offline, along with communications, computers, and who knows what else. I'll have to go down to main engineering to get a better look at the problem."

"That was my plan," replied Ra-Havreii, heading for the turbolift. He all but walked into the still-closed doors before making an awkward stop, turning on his heel, and flashing an embarrassed grin. "No main power, no turbolifts." He pointed aft. "I'll just take the emergency ladder."

As the chief engineer made his abashed exit, Riker got up and walked to Hernandez's side. In slow, careful motions, he helped her stand and steady herself. "Are you all right?"

"I think so," she said. "That last pulse was a doozy. Guess I didn't know my own strength."

Riker did a double-take. "You caused that final pulse?"

"I had to," she said. "It was the only way to close off the passage and destroy the machine at the other end once we were clear. That'll keep the Caeliar off our backs for a while."

She nodded once. "That would probably be a good idea."

Riker turned to Lieutenant Rriarr. "As soon as the turbolifts are working, have Captain Hernandez escorted to quarters and placed under guard." To Hernandez, he added, "No offense."

"None taken," she replied. "After eight hundred years with the Caeliar, I'm used to being treated like a prisoner."

Deanna Troi screamed in horror as Dr. Ree sank his fangs into her chest just below her left breast, and Ree felt absolutely terrible about it, because he was only trying to help.

The Pahkwa-thanh physician ignored Troi's frantic slaps at his head as he released a tiny amount of venom into her bloodstream. Then the half-Betazoid woman stiffened under his slender, taloned feet as the fast poison took effect.

Four sets of hands -- one pair on each arm and two pairs on his tail -- yanked h... --This text refers to an alternate kindle_edition edition.