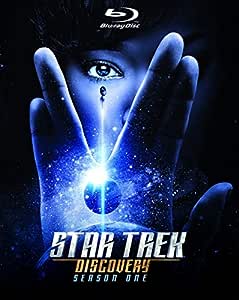 Star Trek: Discovery follows the voyages of Starfleet on their missions to discover new worlds and new life forms, and one Starfleet officer who must learn that to truly understand all things alien, you must first understand yourself.

Star Trek: Discovery follows the voyages of Starfleet on their missions to discover new worlds and new life forms, and one Starfleet officer who must learn that to truly understand all things alien, you must first understand yourself. Format: WidescreenLanguage: EnglishSubtitles: English, French, PortugueseDubbed: French

4.6 out of 5 stars
4.6 out of 5
5,238 global ratings
How are ratings calculated?
To calculate the overall star rating and percentage breakdown by star, we don’t use a simple average. Instead, our system considers things like how recent a review is and if the reviewer bought the item on Amazon. It also analyzes reviews to verify trustworthiness.

What I hate is the distribution chosen for this show. Caught a few episodes on Netflix while out of the country. Excited to sit down and watch the rest, realized that we couldn't, unless we signed up for CBS streaming... Are you *bleepin* kidding me?!?!

Hell, I'd buy the season if it was available. But no way I'm encouraging CBS to start yet another pay service that is going to pile onto my monthly bills, and have me searching around for the show I want. Just ridiculous.

I'll find other ways to view it, and buy the season whenever it's available. I'm all for supporting this show. Just not this BS that CBS is pulling.

Sadly it’s a decent show, what I saw of it, and if not for the need to pay for a streaming service I’d likely be a loyal viewer, but alas greed seems to have gotten the upper hand...

Update: I found out yesterday yet another new Star Trek series is coming to CBS All Access, it’s going to be about the later years of Captain Picard, as much as I want to watch it, I won’t support CBS’s greed, such a pity......
Read more
586 people found this helpful
Helpful
Comment Report abuse

Blobcat
5.0 out of 5 stars Give it a chance! This IS Star Trek after all
Reviewed in the United States on August 26, 2018
Like other reviewers, I really did not want to watch this show when it came out. Between the fact it was only available on its own streaming service and that it seemed very non-trek, it just did not seem worth my time. Yet I knew at some point I was obligated as a fan to watch this, I was just in no hurry.

Time passed, season 1 was long done, I had read nothing about what happened in the show, and then one day I got a free 2 month trial of cbs all access. I decided it was time to rip the band aid off and watch it (surely 2 months would be long enough to slog through this awful show). Then I began watching.

The show just kinda drops you into the story with no real introduction. At first I was a bit confused, didn't quite get the characters, and couldn't follow what everyone was talking about. Saw some weird looking "klingons" I didn't like, and had even more trouble following the long subtitled speeches. Yep as I expected, aside from the being pleasantly surprised by the title music/sequence, I was not enjoying this. I made it through the 2 part first episode over the course of 2 nights, and even though I was feeling much less confused at that point, I still wasn't getting it.

Then everything changed after watching the second episode when Discovery was introduced. I found myself way more engaged and interested in the plot. I wanted to keep watching so I watched another episode. Yes this was better. The next night I continued, and I watched 3 more episodes, only stopping because I needed to get some sleep before work. The next night I binged the rest of the first half of the season. Wait what? I liked this show? How did that happen?!

I finally ended up binging the crap outta this show until the end, and by the end I wanted to start over and see if I could better appreciate the first episode. And you know what? I did! I ended up watching the whole show again in the span of 3 days. And liked it even more the second time around.

Anyways, moral of the story: keep watching and give this show a chance! Yes, it is a bit different and takes some getting used to, but this is a Star Trek series after all, and it's a really good one at that!

Can't wait to own it on blu ray when it comes out.
Read more
545 people found this helpful
Helpful
Comment Report abuse

David Alan Hall
1.0 out of 5 stars Star Trek or not...the writing is simply bad.
Reviewed in the United States on September 8, 2018
You would think that given no production deadline, the show runners would have time to respect good writing and get their scripts in good order.

There are major problems in the writing. The entire season is building toward a focal point, but when the moment comes, the ending is telescoped. It happens in about three minutes. It’s the very definition of anti-climactic. I would use this season in film school as an example of how *not* to break fifteen episodes.

Plus, they hit the reset button. And it's completely unbelievable. I've talked to a lot of Star Trek fans, and a lot of other people, and not a single person thought the ending was satisfying. Or believable.

I could go on and on about how bad the writing was. Here's the clincher: A friend of mine worked on the show. He said the actors were always asking, "Why is my character doing this?"

When that happens, your show is in trouble, because it means the writing is implausible. My friend, who has worked in TV for decades, said it happened more on this show than any other show he's ever worked on.

The production designs, the costumes, the special effects, the music--it was all fabulous. There's no doubt the show is a spectacle. That makes it all the more tragic that good writing wasn’t respected as much as other production elements.

Gary White
5.0 out of 5 stars Very enjoyable
Reviewed in the United Kingdom on December 6, 2018
Verified Purchase
As I die-hard, 54 year-old Trek fan, who first followed the series as a small boy in the late 60s, I waited for a while before I watched Discovery. When the series was launched, I didn’t rush to find out how I could subscribe but decided to wait for the Bluray HD release. I had some trepidations from what I had read and the fact the nearly the whole production team was different from recent Star Trek series raised some concerns.
But, I am very pleasantly surprised. Just as JJ Abrams has successfully re-booted the movie franchise, the TV shows needed a makeover and fresh ideas. So many episodes had been made across 5 different shows over 40 years (we’ve had a 10 year break since the last series Enterprise), that it was getting stale and boring, the same politically correct Stafleet always taking the moral high ground, every conceivable story line had been flogged to death, there was little that was new or refreshing. So, some radical re-thinking was needed and that’s what the current team have delivered, I believe.
As you know, the series is set 10 years before Jim Kirk’s 5 Year Mission and focusses on Starfleet at war with the Klingons. Like many reviewers, I was confused and a bit lost and worried with the first couple of episodes, but once the action moves to the Discovery, things look up. British actor Jason Isaacs as the Captain is superb (leaving aside that he puts on an American accent that seems to swing from Mid-West to Deep South), as is Sonequa Martin-Green as the renegade Starfleet officer made good. The show is everything the older series weren’t – dark, violent, brooding, frightening. Very adult. They swear, the f-word has been used, the chief engineer and the doctor are gay and in a co-habiting relationship. Gay women canoodle after a ship’s party (a party which plays 20th C soul and disco music and rap music!). The Captain is hiding dark secrets and is not in the remotest bit PC. An admiral comes to tick him off for his behaviour, he plies her with Scotch and then they end up in bed. Then he draws a phaser on her!
Great stuff. Yes, it’s still Star Trek. You either get it or you don’t. You either like it or hate it. What I also like is the fresh approach to production. Aside from obviously ample helpings of visual effects and CGI, the cinematography is top-drawer. The studio shots and live action / location sequences are artistically and creatively filmed with real verve and imagination. It’s nice to see more use of dollies, cranes and steady-cams done effectively.
This BR disc comes with every episode from Season 1 (17-18) and lots of extras, such as the inception and casting and deleted scenes, etc. The series was filmed digitally in widescreen format, so as you’d expect the HD transfer is superb.
Read more
104 people found this helpful
Report abuse

I. Langbridge
2.0 out of 5 stars To boldly go where very few can enjoy
Reviewed in the United Kingdom on December 13, 2018
Verified Purchase
Difficult for a trek fan. The series was made for Netflix by CBS, it was made by committee and apparently Netflix had to read the riot act to CBS to attempt to get the storyline back on track. The DVD set does not have subtitles for the Klingons, who a a major story line, consquently they speak gibberish ( if you don’t speak the language) and their story line is difficult to follow. All the scenes are darkly lit, sometimes it’s difficult to see what is happening. The plot is illogical and the main protagonist has no redeeming character traits. Few of the cast are likeable many are deeply offensive. CBS made the series for Netflick. They seem to have started off wrong footed, got worst and then tried a complete redirection. It’s not fun viewing and PC to an annoying degree. All Star Trek first seasons tend to be a bit doggy. Descovery pushes this tendency to the extreme. Borrow somebody else’s set and save money.
Read more
50 people found this helpful
Report abuse

Page 1 of 1 Start overPage 1 of 1
This shopping feature will continue to load items when the Enter key is pressed. In order to navigate out of this carousel please use your heading shortcut key to navigate to the next or previous heading.
Back
Next
Pages with related products. See and discover other items: Trek Uniforms