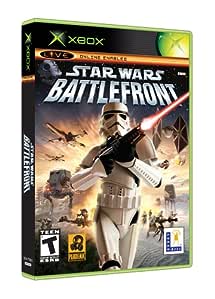 Sell yours for a Gift Card
We'll buy it for up to $2.43
Learn More
Trade in now
Have one to sell?
Sell on Amazon

Buy this product as Renewed and save $33.00 off the current New price.

Battlefront is an action/shooter game that gives fans and gamers the opportunity to re-live and participate in all of the classic Star Wars battles like never before. Players can select one of a number of different soldier types, jump into any vehicle, man any turret on the battlefront and conquer the galaxy planet-by-planet online with their friends or offline in a variety of single player modes. Single player modes include Instant Action, Galactic Conquest, and the story-based Historical Campaigns mode that lets gamers experience all of the epic battles from Episodes I-VI, fighting from the perspective of each of the four factions within the game. First and third-person gameplay depending on player preference.

4.5 out of 5 stars
4.5 out of 5
277 customer ratings
How does Amazon calculate star ratings?
Amazon calculates a product’s star ratings based on a machine learned model instead of a raw data average. The model takes into account factors including the age of a rating, whether the ratings are from verified purchasers, and factors that establish reviewer trustworthiness.

T. Jones
5.0 out of 5 stars YEAH!!!!!
Reviewed in the United States on June 29, 2011
Verified Purchase
Okay, this is one of the single greatest games I have ever played. YOu take the role of a Storm Trooper, Rebel, Droid, or Clone Trooper and shoot your way through waves of AI enemies or up to sixteen friends on online multiplayer (Although the servers are down forever). If you have a buddy that likes to sit on the couch beside you and play shooter games, then this is a great double player game. There are vehicles, guns, and Star Wars areanas!

This is a game that even Star Wars-Dumb people can enjoy. I'm not a fan myself, not for lack of trying, but I love this game. It has a story mode that is weak enough for me to enjoy and has enough combat and streategy to keep my interested. Trying to take down a shield droid with sticky grenades is a strategic move when your health bar is low.

The game also is not too gruesome or vulger that teens cannot play it. A well minded six year old with a liking to Star Wars will love seeing their clone heroes take down the evil robots and be able to fight along side them. No blood, no cursing, and plenty of Star Wars action!

Bryan B
4.0 out of 5 stars Great mindless action, terrific two-player fun
Reviewed in the United States on November 5, 2007
Verified Purchase
This is a First-Person-shooter where you can pick from a large selection of roles, including CIS, Rebel, Stormtrooper, and Wookie, each with different weapons classes and battlefield tools. Also, you have the opportunity to commandeer a satisfyingly large selection of vehicles, from the painfully slow Spider Tank to the recklessly fast Speeder-for-one, each with different weapons. The twist is in the "scoring" system, a twist that makes all the difference. Each segment of play is a battle with an equal number of forces on each side. The AI of each side eliminates the other with roughly equal success, so what you do will ultimately determine the outcome. You may win by eliminating the opposing forces, or by capturing and holding each spawn point for 20 seconds. The latter is almost impossible without doing the former, but that's ok. It's fun to advance, hold a spawn point, take out some more guys, or use your rocket launcher against vehicles, or kick back and snipe. There are so many different levels, each requiring different tactics, that this is a real treat. Two-player pvp mode is the most intense, as you watch the numbers at the top of your screen, representing your forces and those of your enemy, whittle down toward victory or defeat. The cooperative mode almost guarantees success against the AI enemy. It would be good if they made the coop mode a little more challenging. Overall, just a lot of good, crazy fun, and light on the gibs.
Read more
2 people found this helpful
Helpful
Comment Report abuse

In any case, I had a good experience with this seller. This game came in the nicest looking case I've ever seen and it might as well have been made the day before I bought it. Disk was perfect, runs without issue, and it even came with the instruction manual. That sounds like a stupid detail to point out, but considering the number I lost as a kid it screams lack of use to me. Honestly not sure if the seller accidentally put up a new game as used.

The game itself is great fun and features a platitude of battles from across the Star Wars universe. Despite its age, it still looks very nice in single player, and is easy to learn. The battles are set up simply, allowing the player to choose their own strategy. Few, if any games have been able to replicate the novel simplicity of the gameplay, and it is still one of my favorite games to this day.

Aaron Johnson
5.0 out of 5 stars Great game!
Reviewed in the United States on December 13, 2013
Verified Purchase
This game has been one of my favorites for years. I bought a few months ago and have played it a lot. Compared to BattleFront II its a tie. I do like this game because it has a few maps that are not in the second game, because that one focuses around Star Wars Revenge of the Sith where as this one is based on the other 5 movies.

One of the things I like about this game over the second one is if you play in first person and your in a vehicle, it actually feels like your inside the vehicle, you can actually see what everything looks like like it does in the movies. The one thing that this game lacked that the 2nd one has was in space battles and a few other game types. So if you have one or the other, have both.

Some of the maps will have a few changes, for instance Hoth on this game will have 2 AT-STs and the bunker will have a tunnel to go between the main part of the battle field and the shield generator, unlike the 2nd game where the tunnel is caved in with snow.

If your a Star Wars video game fan, this is a must have. Yes it will work on the Xbox 360 with no troubles (unless the game is very scratched up then it'll take a bit to get it to work).
Read more
3 people found this helpful
Helpful
Comment Report abuse

Brandon S
5.0 out of 5 stars Take notes EA
Reviewed in the United States on October 5, 2018
Verified Purchase
LucasArts really cared about their video games based on their Star Wars series and Battlefront is the best and most remembered. So glad Xbox got this backwards compatible.
Read more
Helpful
Comment Report abuse
See all reviews from the United States

JMay
5.0 out of 5 stars Game is good condition for being used
Reviewed in Canada on April 27, 2018
Verified Purchase
Game is good condition for being used. Came as advertised with case and booklet. Works fine on XBox One with no external hard drive or extra equipment.
Read more
Helpful
Sending feedback...
Thank you for your feedback.
Sorry, we failed to record your vote. Please try again
Report abuse

Michael Brideau
5.0 out of 5 stars Arrived fast and playing good
Reviewed in Canada on March 12, 2020
Verified Purchase
The game is playing very good and it arrived very fast which I was pleased to see.
Read more
Helpful
Sending feedback...
Thank you for your feedback.
Sorry, we failed to record your vote. Please try again
Report abuse

Amazon Customer
4.0 out of 5 stars Four Stars
Reviewed in Canada on June 3, 2018
Verified Purchase
Game came in good condition. No problems what so ever
Read more
Helpful
Sending feedback...
Thank you for your feedback.
Sorry, we failed to record your vote. Please try again
Report abuse

Dominique
1.0 out of 5 stars Got wrong thing
Reviewed in Canada on October 18, 2019
Verified Purchase
I got a wifi led controller
Read more
Helpful
Sending feedback...
Thank you for your feedback.
Sorry, we failed to record your vote. Please try again
Report abuse
Load more international reviews

Hiyapaul
4.0 out of 5 stars Four Stars
Reviewed in Canada on August 14, 2014
Verified Purchase
Son enjoyed it.
Read more
One person found this helpful
Helpful
Sending feedback...
Thank you for your feedback.
Sorry, we failed to record your vote. Please try again
Report abuse

joan k
1.0 out of 5 stars Meant to order battlefront two
Reviewed in Canada on October 10, 2013
Verified Purchase
Got the wrong game , I recall it was version two advertised but this came in mail. It was a disappointment for my son who had been looking for this game for years.
Read more
Helpful
Sending feedback...
Thank you for your feedback.
Sorry, we failed to record your vote. Please try again
Report abuse

Page 1 of 1 Start overPage 1 of 1
This shopping feature will continue to load items when the Enter key is pressed. In order to navigate out of this carousel please use your heading shortcut key to navigate to the next or previous heading.
Back
Next
Pages with related products. See and discover other items: xbox 360 racing games, xbox classic, xbox one racing game, xbox racing games, Best Rated in Xbox Games