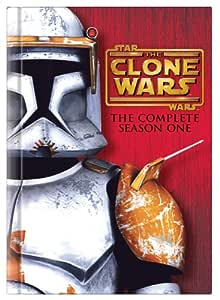 The “Clone Wars” goes back to the original Star Wars film when Obi-Wan Kenobi tells Luke Skywalker that he was once a Jedi knight the same as your father and that they fought together in the Clone Wars. Since that moment fans have been obsessed with what the clone wars were. This new TV series takes place immediately after the events of Star Wars-Episode II: Attack of the Clones. The series follows Obi-Wan Kenobi and his apprentice Anakin Skywalker and introduces us to some new characters such as Ahsoka Tano a girl Jedi knight as well as characters we already know.

The thrilling 3-D CGI animated series The Clone Wars serves as impressive proof that George Lucas's Star Wars universe could translate to a weekly television series that wouldn't lose the scope, imagination, or sense of adventure of the features. Like the 2008 feature film of the same name, the 22 episodes that compose the series' debut season (2008-2009) cover the action between Attack of the Clones and Revenge of the Sith. Here Obi-Wan Kenobi, Anakin Skywalker, and the latter's Padawan, 14-year-old Ahsoka Tano (who takes some getting used to), along with a complex cast of supporting characters from the Galactic Republic (including R2-D2 and C-3PO, again voiced by Anthony Daniels), battle the Separatists, which count members of the Sith and other adherents to the Dark Side of the Force among its ranks. The action is plentiful and the scripts rich with the quasi-mystical and eminently quotable dialogue on which the Star Wars saga has earned its legendary status; one can imagine only the most stringent purist or CGI detractor finding fault with the first season of The Clone Wars.

The handsomely packaged four-disc set for season 1 includes a wealth of extras for those wishing to dig even deeper into the Clone Wars experience. Chief among the pleasant surprises is the widescreen aspect ratio for each episode, which gives greater depth and exposure to every single frame. Seven episodes are listed as Director's Cuts, which translates as an extra minute or two of action or dialogue--not earth-shattering, but they certainly enhance the enjoyment of each episode. Short featurettes, ranging between 5 and 7 minutes, accompany each episode and discuss production notes, character design, and other detail; these are expanded versions of the commentaries by supervising director Dave Filoni that were featured on StarWars.com, with additional contributions by series writer Henry Gilroy and sound designer David Acord, as well as new comments by Filoni. And there's a 64-page book of artwork from the series, including storyboards, concept design, and matte paintings, built into the body of the packaging itself. For the Easter Egg-inclined, a surprise awaits on each disc, including trailers for season 2 and animatics. --Paul Gaita