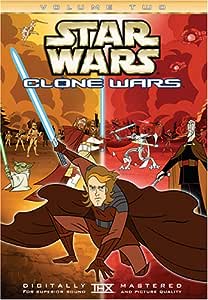 The Emmy Award-winning animated series continues with Star Wars: Clone Wars Volume Two, available for the first time on DVD. Directed by Genndy Tartakovsky, this series captures George Lucas' vision in a dynamic animated style that is a visual delight for all ages. As seen on Cartoon Network, Star Wars: Clone Wars Volume Two concludes the epic adventures that bridge the story between Star Wars: Episode II Attack of the Clones and Star Wars: Episode III Revenge of the Sith. Witness firsthand the trials of Anakin Skywalker and the secret ceremony in which he becomes a Jedi Knight. Then, follow the Jedi as they attempt to repel a surprise attack by General Grievous, on the galactic capital, Coruscant. Clone Wars Volume Two is filled with exciting galactic battles that lead directly to the beginning of Revenge of the Sith.

Volume 2 of the stylish animated "microseries" Star Wars: Clone Wars picks up where volume 1 left off, with General Grievous threatening a group of Jedi. The war between the Republic and the Separatists continues to rage, and due to desperate need, Anakin Skywalker is bestowed the title of Jedi Knight, though he must undergo one final rite of passage by traveling to the frozen planet of Nelvan. The action is at its fiercest when the Separatists launch an overwhelming assault on Coruscant, and Masters Windu and Yoda get to show their stuff to defend the city. However, it's just a diversion from the main goal: Grievious's attempt to kidnap Supreme Chancellor Palpatine. In the series' most dramatic moment, Shaak Ti and other Jedi try to fend off the droid's attack. Clone Wars Volume 2 aired on the Cartoon Network in March 2005, and it's a bit more substantial than volume 1, taking place in five 12-minute chapters (nos. 21-25) rather than 3-minute chapters. And while volume 1 was mostly flat-out action, the developments in volume 2 lead directly to the opening of Episode III, Revenge of the Sith. And you even get small tidbits such as C-3PO (again voiced by Anthony Daniels) unveiling his new gold look, Padme sporting a cinnamon-bun hairdo, and the reason why General Grievous has difficulty breathing. Let casual fans content themselves with the feature films; Clone Wars remains essential viewing for the Star Wars aficionado. (Rated Y7 for cartoon action and violence) --David Horiuchi

DVD features
In both a commentary track and a featurette, Genndy Tartakovsky and his creative team discuss the making of Clone Wars and how it ties into Episode III, Revenge of the Sith. If you're not a fan of the Lego Star Wars, you might become one after you watch the amusing "Revenge of the Brick" trailer. There's also the same Xbox demo of Battlefront II that was on the Sith DVD, and the Dolby 5.1 sound is an improvement over volume 1's 2.0 Surround. --David Horiuchi

In both a commentary track and a featurette, Genndy Tartakovsky and his creative team discuss the making of Clone Wars and how it ties into Episode III, Revenge of the Sith. If you're not a fan of the Lego Star Wars, you might become one after you watch the amusing "Revenge of the Brick" trailer. There's also the same Xbox demo of Battlefront II that was on the Sith DVD, and the Dolby 5.1 sound is an improvement over volume 1's 2.0 Surround. --David Horiuchi

4.8 out of 5 stars
4.8 out of 5
459 global ratings
How are ratings calculated?
To calculate the overall star rating and percentage breakdown by star, we don’t use a simple average. Instead, our system considers things like how recent a review is and if the reviewer bought the item on Amazon. It also analyzes reviews to verify trustworthiness.

David the WavidTop Contributor: Batman
5.0 out of 5 stars I'm late to the party, but a great series
Reviewed in the United States on February 12, 2017
Verified Purchase
Where the 2008 THE Clone Wars series focuses more on a sprawling anthology of emotionally dynamic narratives, Clone Wars bridges the gap in a short digestable series of episodes that essentially form a movie. Despite what Lucasfilm and militant fans will tell you, this series in no way conflicts with the 2008 series (aside from one inconsequential shot in which Anakin's hair has not yet grown out while he starts up the starfighter seen in Episode III) and in fact Volume 1 is essential viewing before the 2008 series, as it introduces Ventress and Grievous, who seem to pop out of nowhere in THE Clone Wars. It may be a bit annoying to watch both Clone Wars shows in chronological order, as the first episode of Volume 2 takes place directly after Volume 1 and before 2008 TCW, while episodes 2-5 pick up after TCW's season 6, leading directly m into Revenge of the Sith as perfectly as Rogue One to A New Hope. And really, the Battle of Coruscant seems to be sorely missing from the narrative of the whole Star Wars canon without this show.

The action is clean, stylish, and awe-inspiring, as anyone who's seen Tartakovsky's other famous work, Samurai Jack, would guess. As an aspiring animator, this series had a huge influence on me personally, but I digress. The DVD has enough bonus features to keep you entertained a bit longer than the show's runtime, but as a die-hard fan of this show, it seems to not be enough.

Can't recommend this show enough. While emotionally shallow in contrast to the films and 2008 THE Clone Wars, this series is thrilling enough to keep you entertained no matter your age.

wellbarberedfox
5.0 out of 5 stars Beats the later Clone Wars series by a parsec, at least
Reviewed in the United States on September 9, 2016
Verified Purchase
Volumes one and two of this series are fabulous. IMHO, they blow away the later Clone Wars series that ran for six or seven seasons. The writing and storylines here are sharp and concise. And I love the traditional animation. Well done. Even if George Lucas has disowned these as Star Wars canon, in favor of the new series, I don't care: this remains canon for me, re what went on in the Clone Wars. George also sold his life's work to Disney. I love the man, but he doesn't always make the right calls.
Read more
11 people found this helpful
Helpful
Report abuse

Arnold
VINE VOICE
5.0 out of 5 stars a fun take on Star Wars
Reviewed in the United States on November 26, 2012
Verified Purchase
First of all, this is very, very different from the Star Wars: Clone Wars CGI show currently running on Cartoon Network. Tartakovsky's Clone Wars uses 2D animation, as opposed to the current show's 3D CGI. The episodes are actually a series of shorts (micro-episodes) intended to tell what happened right after AOTC and right before ROTS.

I like both versions of the Clone Wars. However, I think the visual imagery in the Tartakovsky version is more interesting. There are some really interesting and memorable creature designs, such as Yoda's Kybuck. I love that the show uses familiar alien species for new Jedi, such as the Ithorian Roron Corobb, Talz Foul Modama, and Wolfman Volviff Monn. Visually, they're far more memorable than any of the characters from the newer Clone Wars.

I also like that General Grievous isn't a pansy in this series. He's absolutely brutal. I found Grievous in ROTS to be more annoying than anything else, and even in the current Clone Wars find him merely tolerable. However, his introduction at the end of Volume 1 is absolutely chilling.

Unfortunately, because of time constraints, the Tartakovsky version obviously doesn't delve into character development or intricate story plots. On those aspects, I think the current Clone Wars excels. Volume 2 of the Tartakovsky series does tell the story of how Palpatine was kidnapped, but even that is more a prolonged action sequence than a rich story.

Overall, if you're a Star Wars fan, the Tartakovsky is definitely worth tracking down. I found both volumes used in great condition for around $20, so it's possible to get a deal. More than anything else, some of the new background characters and images are truly iconic.
Read more
9 people found this helpful
Helpful
Report abuse

Matthew
4.0 out of 5 stars The original clone wars tv series is supreme!!
Reviewed in the United States on November 15, 2020
Verified Purchase
For a DVD release, the film/animation is good and the story engaging, although short. The real prize here is being able to visit this nostalgic series and look back at how Star Wars was trying to expand the prequel series canon/world in the early/mid-2000s. The special features interviews are interesting, and overall I would recommend this DVD to Star Wars fans both young and old who are interested in the clone wars/prequel era of Star Wars.
Read more

Ben
5.0 out of 5 stars original and still the best
Reviewed in the United Kingdom on February 7, 2014
Verified Purchase
like this more than the new version, with all its suped up graphics and money spent on it. Bit like the new three star wars films what he gained in effects he lost in story telling and good stylised imagery. I also liked the graphic novels of the old republic because of this, the days of Ulic and Exar, the likes of Thon getting it on.... the fight between Anakin and Asajj on Yavin has to be one of the best ever, there are a couple of episodes that aren't as good but not that many, I also like Obi wan Vs Durge with lances, the first known arrival of the leader of the droids who is hunting Jedi in the downed space ship, what was his name again....? Anyway he's far less a coward here than he is later on, which I liked.
Read more
2 people found this helpful
Report abuse

Dmitri M. A. Hubbard
5.0 out of 5 stars Better than Part 1 in character development
Reviewed in the United Kingdom on April 7, 2008
Verified Purchase
This bridges the gap nicely between Part 1 of the Clone Wars and Star Wars Episode III - Revenge of the Sith. The episodes are six minutes and therefore they are able to explore in much more detail the darker side of Anakin and his love-hate relationship with Obi-Wan. The focus is on their adventures in the Outer-Rim Territories as mentioned in Star Wars Ep III. Anakin becomes a Jedi Knight, and Coruscant is attacked by the Confederacy of Independent Systems. During this diversion, General Grevious steals in and captures Chancellor Palpatine. Therefore it dove-tails right into Ep III.

Perhaps the most talked about part of this release is the foreshadowing of how Anakin will be tempted to evil, as symbolised by his robotic hand growing larger than larger in a psychadelic dream sequence, as part of his personal test and trial. This mirrors the part in Ep VI where Luke Skywalker examines his own hand, and realises that he could become his father's replacement, a new tool for the Emperor.
Read more
Report abuse

Cliente Amazon
4.0 out of 5 stars Essential
Reviewed in the United Kingdom on June 1, 2019
Verified Purchase
Essential for every sw fan
Read more
One person found this helpful
Report abuse