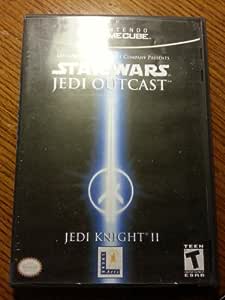 by LucasArts
Platform : GameCube |
Rated: Teen
3.9 out of 5 stars 58 ratings
Available at a lower price from other sellers that may not offer free Prime shipping.
Only 1 left in stock - order soon.
Arrives: Wednesday, July 15 Details
Fastest delivery: Friday, July 10
Order within 8 hrs and 44 mins Details
Sold by Poggers and Fulfilled by Amazon.
17 used from $18.34 5 collectible from $45.95

Take on the role of rebel ex-Jedi Kyle Katarn in Star Wars Jedi Knight II: Jedi Outcast. Several years have passed since you avenged your father's death and saved the Valley of the Jedi from Jerec and his band of Dark Jedi. You decided never to use the force again for fear that you might turn to the Dark Side. You entrusted your lightsaber to Luke Skywalker and vowed never to use it again. Now a new threat has shown its face and you must reclaim your past in order to save the universe from evil.

In the tradition of the multi-award-winning Star Wars: Jedi Knight, Star Wars, Jedi Knight II: Jedi Outcast features rebel agent Kyle Katarn in exhilarating first-person action. Several years have passed since Kyle avenged his father's death and saved the Valley of the Jedi from Jerec and his band of Dark Jedi. Allowing his Force powers to languish for fear of falling to the dark side, Kyle entrusted his lightsaber to Luke Skywalker, vowing never to use it again. But when a new and menacing threat to the galaxy emerges, Kyle knows he must reclaim his past in order to save his future.

Players assume the role of Kyle as they employ a unique mix of weapons, Force powers, and the lightsaber in both single- and multiplayer modes. Jedi Outcast features expanded and enhanced use of the lightsaber, with new attack and defense moves. Tap into the powers of the Force, including jump, push, Jedi mind tricks, and more. Employ combat or stealth, depending on the situation. When a fight is necessary, be at the ready with an arsenal of weapons: stun baton, Bryar blast pistol, and blaster rifle, to name but a few.

3.9 out of 5 stars
3.9 out of 5
58 customer ratings
How does Amazon calculate star ratings?
Amazon calculates a product’s star ratings based on a machine learned model instead of a raw data average. The model takes into account factors including the age of a rating, whether the ratings are from verified purchasers, and factors that establish reviewer trustworthiness.

Liz P.
1.0 out of 5 stars Crappy seller
Reviewed in the United States on December 28, 2018
Verified Purchase
Crappy seller. Never will use again. This disk was clearly not tested and has visible damage.
Read more

Jefferson Thomas
5.0 out of 5 stars Good Ol' Star Wars Gaming
Reviewed in the United States on April 17, 2013
Verified Purchase
Yeah, it's a little dark sometimes, but turning up the brightness on your monitor helps, and hey, you get night vision goggles during the game so during the few times it gets bad just throw them on. If the game was a little brighter you'd probably never use them, now they have a purpose. It didn't hinder my gaming experience, I've been loving every minute of it. Granted, I don't play a ton of video games so you guys who do are probably a bit more picky then I am. However I will say this, I don't play a lot of games because I get bored of them, and I haven't gotten bored of this one yet. It's a lot of fun, you got that old gamecube experience of graphics that are good enough to amuse but not so good that you forget you're playing a game, so it's kind of like playing Dark Forces sometimes. AI that makes you laugh with those rare priceless moments when somebody is shooting at you and then drops off a cliff by accident. I guess a lot of people see this as a negative, but I'm having fun with it. The story is pretty cool, the levels are big and detailed. The sound is great, actually it's probably the best part of the game. You want to battle some stormtroopers? Go ahead, battle some stormtroopers.
Read more
Helpful
Comment Report abuse

MasterAP
4.0 out of 5 stars No-Go GameCube
Reviewed in the United States on January 2, 2014
Verified Purchase
For whatever reason, this game did not run on my GameCube but it runs fine on the Wii.

This is a great game of its time. I'm wondering if they'll make more from this series??

Ryan
5.0 out of 5 stars amazing
Reviewed in the United States on April 15, 2014
Verified Purchase
one of the best games all time, just the multiplayer is something that you can play for a while. it is very addicting and should be remade for better graphics.
Read more
Helpful
Comment Report abuse

Berger
4.0 out of 5 stars good buy
Reviewed in the United States on March 13, 2014
Verified Purchase
fun game, my child loves the Jedi Arena, there are many options for battle. the disc was used and scratched but works with no issues
Read more
Helpful
Comment Report abuse
See all reviews from the United States

Stephane
5.0 out of 5 stars It's an amazing game!
Reviewed in Canada on April 7, 2017
Verified Purchase
One of the best star wars games. It's awesome, would recommend to anyone.
Read more
Helpful
Sending feedback...
Thank you for your feedback.
Sorry, we failed to record your vote. Please try again
Report abuse

Page 1 of 1 Start overPage 1 of 1
This shopping feature will continue to load items when the Enter key is pressed. In order to navigate out of this carousel please use your heading shortcut key to navigate to the next or previous heading.
Back
Next
Pages with related products. See and discover other items: all gamecube games