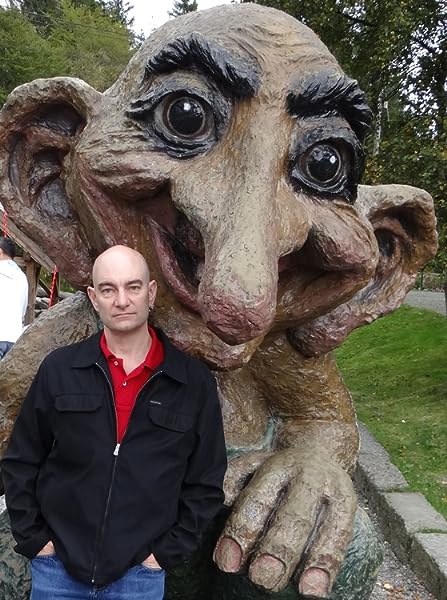 Lou Anders has published over 500 articles and stories on science fiction and fantasy television and literature. He is the recipient of a Hugo Award for editing and a Chesley Award for art direction. He is also the author of the middle grade series Thrones and Bones. A prolific speaker, Anders regularly attends writing conventions around the country. He and his family reside in Birmingham, Alabama. You can visit Anders online at louanders.com

Annie Wu is an illustrator currently living in Chicago. She is best known for her work in comics, including DC's Black Canary and Marvel's Hawkeye.
Start reading Star Wars: Pirate's Price (Star Wars (Disney)) on your Kindle in under a minute.

Melnik
4.0 out of 5 stars Sit around, my friends, to the tales of Hondo Ohnaka!
Reviewed in the United States on February 1, 2019
Verified Purchase
Following from where its sister book left off, Pirate's Price sees Bazine Natel continuing her search for the Millenium Falcon, taking her to the planet Batuu to meet the legendary pirate Hondo Ohnaka.

Pirate's Price is split into five sections: the framing device of Bazine meeting with Hondo and him beginning the first of his tales, the first tale where he stole aboard the Falcon and got into a vault heist with Han, Chewbacca, and a woman named Mahjo Reeloo, the second tale where Maz Kanata and Hondo rescue Han and Chewie from pirates that have been stealing ship never Maz's castle, the third tale where Chewie loans the Falcon to Hondo and his interactions with the Porgs still on board, and the final part of the framing device where Bazine completes her mission.

What I love about Pirate's Price is the fact it is told in first-person and captures Hondo's voice perfectly. It isn't like "All Creatures Great and Small" from Tales from a Galaxy Far, Far Away: Aliens: Volume 1 where Bobbajo's story was told from a detached third-person point-of-view. Here, Hondo is telling his tales and it bloody reads like Hondo is telling his tales.

However, I did felt the first tale went on for a little bit too long and the humanoid elephant-like aliens introduced here feel so cheap, feeling more like something from Teenage Mutant Ninja Turtles than the Star Wars Universe. Plus, it is just contrived that the Pakiphantos they accidentally upset was also hired by Reeloo's target.

Overall, captured the spirit of Hondo and co. while showing the times between Solo and ANH, RotJ and TFA, and the time after The Last Jedi.

Margaret J. Morgans
5.0 out of 5 stars Hilarious and so much fun — LOVE Hondo
Reviewed in the United States on January 19, 2019
Verified Purchase
Anybody who likes Hondo Ohnaka from Star Wars Rebels and The Clone Wars will LOVE this. It's hilarious, written first person from his point of view and his misadventures with Han and Chewie (and Maz Kanata AND some Porgs) are TOO GOOD. You will laugh so much at the crazy stuff he gets up to. This, along with the other books and comics in the "Flight of the Falcon" series are such a joy and worth every penny. Annie Wu's illustrations are delightful too. I really hope she gets to do more Star Wars work, because I love the books she has done so far.
Read more
8 people found this helpful
Helpful
Comment Report abuse

AC
5.0 out of 5 stars Great book for young readers
Reviewed in the United States on January 10, 2019
Verified Purchase
My daughter loves Star Wars, and these books give them a great read. There is enough detail but not too much. It includes some pictures for enjoyment also.
Read more
4 people found this helpful
Helpful
Comment Report abuse

Wesley
4.0 out of 5 stars Return of our favorite Space Pirate
Reviewed in the United States on October 23, 2019
Verified Purchase
An excellent read for any Star Wars fan who wants to find fun Easter eggs revolving around Disney's Galaxy's Edge, or for anyone who is a fan of Hondo from the animated TV series. The book revolves around several tales Hondo spins while talking with a potential customer. Each interlude between tales focuses on Oga's Cantina in Batuu (Disney's Galaxy's Edge), and gives the outer rim world a bit of background.

Frank
5.0 out of 5 stars Star Wars proper. Fantastic!!! Awesome!!! Funny!!! Captivating!!!
Reviewed in the United States on January 18, 2019
Verified Purchase
There are not enough word to describe how awesome this book is.

Once I started I could not put it down. Very enthralling, entertaining, and captivating.

I laugh a lot, I shed some tears, I held my breath, I gasped, and laugh a lot more!!!

All and all great book for everyone, from kids to adults, from hardcore fans to people that have never heard of Star Wars.

Great book from cover to cover. The art is fantastic and exactly what the book was conjuring in my mind as I read it.
Highly recommend to listen the audiobook as you also read STAR WARS PIRATE'S PRICE

Steve
5.0 out of 5 stars If you love Hondo, you'll really enjoy this book
Reviewed in the United States on March 4, 2019
Verified Purchase
Overall, a fun, easy-to-read adventure filled with humor and imagination. The author captured Hondo's voice perfectly and the tie ins to the upcoming Galaxy's Edge are a great bonus.
Read more
2 people found this helpful
Helpful
Comment Report abuse

Skuldren
5.0 out of 5 stars The Audiobook is a Blast! Very Fun
Reviewed in the United States on May 7, 2019
I’m not an audiobook person, but sometimes you have to make exceptions. When I heard Pirate’s Price was being narrated by Jim Cummings, the person who actually voices Hondo Ohnaka, I knew an exception might be in order. Now Pirate’s Price is a younger reader novel at just 240 pages. On top of that, I was not familiar with Lou Anders’ writing. So jumping all in with Pirate’s Price was a bit of a gamble. Thankfully, it paid off big time. I could not believe just how fun this story was as an audiobook. Hearing the voice of Hondo Ohnaka recounting these wild adventures brought back the character I fell in love with in Star Wars: The Clone Wars. The writing in this book captures his voice perfectly. All the humor is there that makes this character so colorful and charming. And Jim Cummings is there to give you all 5 hours and 11 minutes of Hondo. If you’re a fan of the character, this is one audiobook you will most definitely want to experience.

The story is told with a bit of a framing device as Bazine Netal is looking for the Millennium Falcon and she tracks down Hondo Ohnaka in hopes of finding it. Hondo takes the opportunity to regal her with some tales of his experiences with the famous ship. This leads to three different stories, all of which are a lot of fun. From Hondo flying with Han Solo and Chewbacca as they try to pull off an impossible score during the days of the Empire, to a journey with Chewbacca after Han’s death and a ship full of porgs, it covers different parts of the Star Wars timeline and different eras of Hondo’s life. All the while the dastardly pirate keeps the listener entertained with “peow peows” of blaster fire, his longing to steal the Falcon for himself, and his ever hilarious quips of wisdom. Since Hondo is telling the stories, most of the book is actually narrated by Hondo, and it’s not just him showing up to do his dialog. This is an extra bonus for Hondo fans.

Now Jim doesn’t just voice Hondo in the book, as he also has to do character like Han, Chewbacca, even Maz Kanata. While those characters are a bit of a stretch for him, he makes it work, and it doesn’t detract from the story. Even if there is a voice you don’t like, it’ll come back to Hondo soon enough that there’s little to worry about.

With over five hours of content, the great voice of Jim Cummings doing Hondo, and a very fun story, Pirate’s Price is a must get. Seriously, if you like Hondo, you owe it to yourself to get this book as an audiobook. It’s a true joy to listen to. I give it a five out of five.
Read more
3 people found this helpful
Helpful
Comment Report abuse
See all reviews from the United States

K. G. A. Alavi
4.0 out of 5 stars The greatest Pirate in the galaxy
Reviewed in the United Kingdom on January 22, 2019
Verified Purchase
A good book that I enjoyed much more then I thought I would. Narrated by Hondo Ohnaka (Disney era Star Wars' answer to Jack Soarrow).

I know this book is aimed a younger readers but it is still great for older Star Wars fans that have been their from day one.

The book contains 3 stories. The first an aging Hondo is drawn into a heist (or is is the other way around) by a young Han Solo, Chewbacca and a mystery woman.

The second story is rescue attempt of and post Return of the Jedi Han and Chewie.

The third story takes place post the Last Jedi, I don't think their are any real insights to happens after the Last Jedi but good story.

An all round good book enjoyable, and I am really glad Han did shin in the first story. This is really Hondo's book establishing him a lot more.
Read more
One person found this helpful
Helpful
Sending feedback...
Thank you for your feedback.
Sorry, we failed to record your vote. Please try again
Report abuse