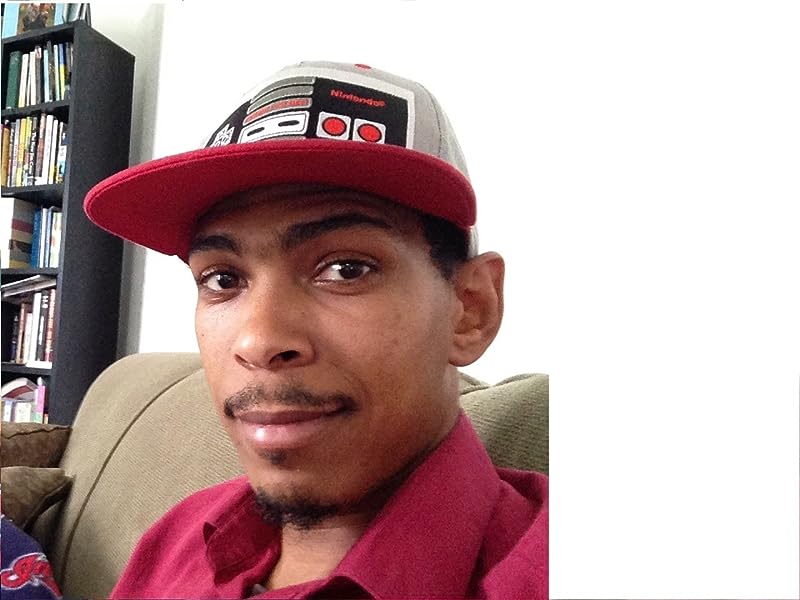 When Black and his team are sent to investigate a foreign ship orbiting near the Harmonica spaceport, they're killed onboard by a homicidal humanoid weapon built in the image of a beautiful woman. Several years later, Black is reborn through a miracle of science on an unfamiliar planet called Neon. He's mysteriously set free and flees to Starlight City...

Radford Lee is a college writing instructor, freelancer and Indie Science Fiction author inspired by classic works of Heinlein, Philip K. Dick and others. Elements of his work certainly fit into this classic Sci-Fi mold. Concurrently, growing up in an urban setting and experiencing the evolution of computers and video games in the digital age has translated to a cyberpunk/noir style in Lee's writing.
Lee has also volunteered his talents in after-school programs and creative writing workshops in his local community. He lives with his beautiful family in Ohio. Starlight City is his first novel.

Start reading Starlight City on your Kindle in under a minute.

Delsheree D. Gladden
4.0 out of 5 stars Interesting start to the series
Reviewed in the United States on September 13, 2013
Black has trouble remembering his life before battling a frighteningly beautiful android intent on killing him. Bits and pieces of memories slip back through every once in a while, but staying alive and under the radar is his main objective...until a faulty ID badge begins to attract attention and he goes in search of help. His search lands him in the middle of a fight he wasn't expecting, but soon finds he can't walk away from.

The futuristic world of Starlight City was very well planned. The details build a very complex world of humans, part humans, and robotic beings existing in a very precarious balance. Black, who is no longer entirely human, skirts around the edges of civilization. Those like him are treated as outcasts. The social structure felt quite realistic as well. I did have trouble with some of the smaller details like the money system and time system. I didn't feel like these were explained completely, so I wasn't always sure of how much time had passed or the significance of the amount of money involved.

The main character, Black, had a very intriguing story. Parts of his memory are gone, yet he remembers bits and pieces at times and wants to find out what really happened to him. I enjoyed following his story. Griff was also an interesting character. Now trapped inside a mechanical body, he still has access to his human memories. There is some disconnect between remembered emotions and actually experiencing emotions, but he develops bonds with those around him that drive his decisions and actions.

The overall story was intriguing. I think it has good potential as a series. The pacing was a bit slow after the initial chapter up through the middle of the book. Part of the problem with the pacing was that the timeline kept jumping back and forth, sometimes to a different character as they remembered an event that happened previously. It kept the story from progressing smoothly and broke the flow. As a whole, this was an interesting book. I had a little difficulty with the pacing and flow, but it was a fun read.

Barbara Ann
4.0 out of 5 stars Great Science Fiction Read
Reviewed in the United States on July 29, 2013
This was a great science fiction novel that introduces readers to a futuristic world where we can see the effects of major scientific breakthroughs on a society that still retains some semblance of our lives today.

The protagonist is Black. When the story opens, Black is in Starlight City on the planet Neon. Right away it is easy to see Black isn't a normal human. He wears sunglasses all of the time to hide his unusual yellow- colored eyes that may draw unwanted attention to him. When he gets injured, we learn that his limbs can regenerate. His body has been altered by someone, but he has no memory of it.

Lee does a great job in his vivid depiction of Starlight City controlled by Administrator Nahzier who is heavily involved in scientific human experimentation. So far, Nahzier has created an army of quasi-humans called Alpha Humans who are blend of human and robot.

Their brains have been "reformatted;" in actuality, they have been brainwashed to follow the Nahzier's mandates. They are portrayed as "human killing machines" sent to patrol the city in order to keep citizens "safe." They serve under Nahzier's rule and follow his commands. I couldn't help but associate the name Nahzier to "Nazi." Was this intentional? Hmm...

Griff Hurst is one of these quasi-humans ,and his story describes the process of how he was changed. Griffin died as a result of a government sanctioned virus unleashed upon its citizens. He was taken to Nahir's laboratory and resurrected in a robotic body. Griffin no longer exists, but Griff does. Whereas, some science fiction writers avoid discussing the afterlife, Lee brings up the existence of a human soul and how it factors in to experimentation on the human body. I found this concept fascinating and one that I consider when reading science fiction.

Griff is different from other Alpha Humans. He has retained his human memories, and he has a conscience. He is disgusted by his new purpose of killing on command, and he refuses to allow Nahzier to manipulate others for the so-called greater good of society. Citizens are afraid of the Alpha Humans and see them as "heartless humanoids." I found Griff to be symbolic of how it's really impossible to completely change a human. When you throw in a soul and human emotions, they interfere with a total reprogramming of the human mind.

As a result, Griff turns rogue and escapes Nahzier's control. He joins Black and a group of misfits who work together to create an army to overthrow the Nahzier's Regime. Because of the super abilities of the Alpha Humans, this is a daunting task. However, Griff knows the secret of how to cause these quasi-humans to malfunction.

As the story progresses, Black learns the truth of behind his kidnapping, experimentation, and escape. Black is now a "prized specimen," and Nahzier desperately wants him back because of his future potential for creating immortality. Even at the end of the book, however, I was not completely clear on how Black is unique after undergoing scientific experimentation. I hope his changes will be expanded upon and clarified in future books.

The plot does not follow a sequential time pattern. Journal entries by Griff's father, renowned scientist Dr. Hurst, flashbacks from Griff and the back stories of other members of the rebel group provide greater depth and insight into the dynamics of Starlight City's insulated world.

The journey eventually brings Black back to Earth where his story actually began. The conclusion left me to infer that the story would continue. Even though Black was the protagonist, I was drawn to Griff's character; he played such a major role in the book, and I wish he had been the leading character instead. Griff's relationship with the Alpha Human Jada is one I hope will continue to develop in future books. There were minor grammatical errors strewn throughout the story, and it could benefit by one more round of proofreading. Nevertheless, I enjoyed this read and look forward to future books by Radford Lee.

I received a copy of this book from the author to provide an honest review.
Read more
Helpful
Comment Report abuse
See all reviews

Mark
2.0 out of 5 stars Not for me
Reviewed in the United Kingdom on February 22, 2013
Verified Purchase
I abandoned this book about 3 chapters in. I did not like the writing style and felt no interest in any of the characters. It wasn't badly written in any conventional sense but it lack any sparkle for me. Maybe it got better after the point where I quit but I felt that I was reading it solely because I had paid for it and saw no reason to continue.
Read more
Report abuse
See all reviews