State of the Union: A Fina Mendoza Mystery and millions of other books are available for Amazon Kindle. Learn more 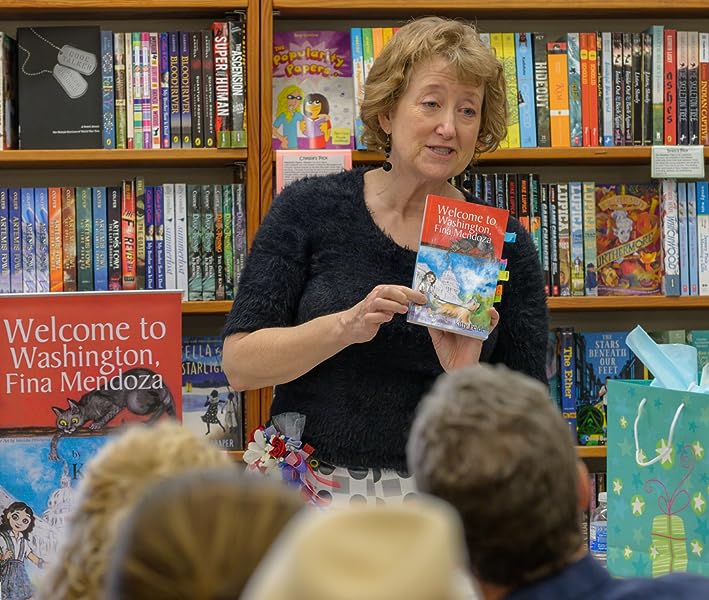 by Kitty Felde (Author)
5.0 out of 5 stars 11 ratings
See all formats and editions
Sorry, there was a problem loading this page. Try again.

The second title in the new and outstanding Fina Mendoza Mystery series by author and storyteller Kitty Felde, "State of the Union" is an impressively original, exceptionally well written, thoroughly entertaining, and unreservedly recommended read for children ages 7-12.


"State of the Union is another stellar entry in Kitty Felde's outstanding Fina Mendoza Mystery series.  State of the Union has it all -- a protagonist you will cheer for, warmth and humor, and a good mystery story underpinning it all. Readers will get an inside look at how their government works -- Felde handles this beautifully, weaving her expertise in seamlessly -- and so much more.

A touching story of a girl in search of her place in the world following the loss of her mother. Like a lovely rainbow cake, the story is richly layered with mystery, friendship, and family conflict, and stars a colorful cast of characters. State of the Union is a heartwarming read, a gem of a book.

Ginger Park, author of "The Hundred Choices Department Store" and "The Royal Bee"


Felde, executive producer of the podcasts Book Club for Kids and The Fina Mendoza Mysteries, combines her knowledge of the behind-the-scenes workings of Congress and Capitol Hill's historic locales with suspense, humor, and a young, first-person Latina protagonist who is alive with realistic curiosity, empathy, and determination. Woven into the plot, with a light but meaningful touch, are political differences, immigration issues, Fina's eventful approach to inquiry and research, and a strong, loving family still adjusting to loss and change.  A lively, diverse mystery with enjoyable, informative plotting and a relatable young female protagonist.

I fell in love with the U.S. Capitol. I was lucky enough to cover Capitol Hill for public radio for nearly a decade, explaining how Congress works to grownups. But what about the next generation? Will the partisan bickering and attacks turn off an entire generation from public service?
I turned to Fina Mendoza to be our tour guide to the inner workings of Washington, using her mysteries to introduce us to the world inside the U.S. Capitol, and perhaps inspiring a new generation to consider public service.
Fina was inspired by a young woman I mentored for many years, the first person in her family to go to college. She's now working on her PhD. She lent me her name and her spirit for our young detective.
In State of the Union, Abuelita's story was inspired by a young couple I followed as a reporter for months and months as they went through the process of becoming first legal residents, and then American citizens. The book is dedicated to them. It was an incredible story of faith and perseverance. I remember what Oscar said when he finally became a citizen. He said, "I have my American dream. I have my wife, I have my children, I have my house, I have my bird..." We all have our own version of the American dream.

Award-winning public radio journalist and TEDx speaker Kitty Felde hosts the Book Club for Kids podcast - named one of the top 10 kidcasts in the world by The Times of London. The native Angeleno created the Washington bureau for Southern California Public Radio. She's reported on everything from war crimes trials to OJ Simpson to baseball, and hosted a daily talk show in Los Angeles. She won the Los Angeles Radio Journalist of the Year award three times from the Society of Professional Journalists and the L.A. Press Club. Her many plays are performed worldwide.Kitty is also executive producer of The Fina Mendoza Mysteries podcast, based on the series of Fina Mendoza books.She fell in love with literature for young readers when she was a young reader herself, working at her local public library.
Read more
Start reading State of the Union: A Fina Mendoza Mystery on your Kindle in under a minute.

5.0 out of 5 stars
5 out of 5
11 global ratings
How are ratings calculated?
To calculate the overall star rating and percentage breakdown by star, we don’t use a simple average. Instead, our system considers things like how recent a review is and if the reviewer bought the item on Amazon. It also analyzes reviews to verify trustworthiness.

Keek
5.0 out of 5 stars Fina and Family are Fascinating and Fun!
Reviewed in the United States on October 8, 2021
Verified Purchase
As I was reading State of the Union, I looked forward to my leisure reading time so I could get back to this book. I loved being with feisty, yet well-behaved, Fina Mendoza. And I very much enjoyed Abuelita, the spirited grandmother who takes care of this motherless family. The best recommendation I can give you is to say that I was sad to come to the end of the book because I missed being in the adventure with this family. The author really knows how to grab a reader and make her/him feel inside the book with real characters. I can't wait for a third volume in this series!
Read more
Helpful
Report abuse

Julienne L. May
5.0 out of 5 stars Another entertaining and informative story from Kitty Felde
Reviewed in the United States on October 12, 2021
Verified Purchase
This is Kitty Felde's second story about Fina Mendoza, daughter of a U.S. Congressman. Though directed to pre-teens, there is enough solid writing to entertain an adult. Some mystery and travels through the Capitol should keep the seven to twelve-year-old entertained as well.
Read more
Helpful
Report abuse

Donna Hayes
5.0 out of 5 stars Loved this book!
Reviewed in the United States on October 3, 2021
Verified Purchase
I enjoyed the first book, Welcome to Washington Fina Mendoza and this one was equally entertaining. I’m looking forward to Fina’s next adventure.
Read more
Helpful
Report abuse

Audie Voorhies
5.0 out of 5 stars Can't wait to read this!
Reviewed in the United States on August 13, 2021
Jeff Daley's review, "An outstanding read as we follow the adventures of young Fina Mendoza, certified detective, along with her trusty partner in crime dog, "Senator Something." Follow Fina, as she tries to find the bird who pooped on the president and tries to uncover a mysterious message only the Chickcharney will reveal. An outstanding follow up to the original Fina Mendoza book. Fina is now engrossed in her newly found profession, with more exciting mysteries I'm sure to follow."
Read more

5.0 out of 5 stars Can't wait to read this!
By Audie Voorhies on August 13, 2021
Jeff Daley's review, "An outstanding read as we follow the adventures of young Fina Mendoza, certified detective, along with her trusty partner in crime dog, "Senator Something." Follow Fina, as she tries to find the bird who pooped on the president and tries to uncover a mysterious message only the Chickcharney will reveal. An outstanding follow up to the original Fina Mendoza book. Fina is now engrossed in her newly found profession, with more exciting mysteries I'm sure to follow."
Images in this review

Sandy Hobbs
5.0 out of 5 stars This is one smart, resolute, curious young heroine. I love her!
Reviewed in the United States on September 11, 2021
This charming book is a wonderful follow up to Welcome to Washington and takes us on a behind-the-scenes mystery tour of the ins and outs, highs and lows of the Nation's Capitol in order to find a unique and elusive bird which may hold the solution to a friend's dilemma.
Will our independent young heroine, Fina Mendoza, be able to solve this mystery and take us along for the very enjoyable ride, loaded with some history, politics, a new canine client and a lot of warmth, family and fun? I certainly think she can take on anything and we can all happily share her and her youthful adventures!

Joan Anglin
5.0 out of 5 stars Fina Is Back Solving Mysteries!
Reviewed in the United States on September 15, 2021
Fina Mendoza is back again solving mysteries! Kitty Felde’s second book, “State of the Union, A Fina Mendoza Mystery,” adds to the first book of Fina’s story as a congressman’s daughter living in Washington DC and solving mysteries. Fina uncovers a secret message by finding a bird that has pooped on the President during the State of the Union Address. This book is not only a fun read, but also adds an educational touch. By including a look into the workings of Capitol Hill, a young reader can learn about government. Fun read for adults too. I enjoyed it.
Read more
One person found this helpful
Helpful
Report abuse
See all reviews
Back to top
Get to Know Us
Make Money with Us
Amazon Payment Products
Let Us Help You
EnglishChoose a language for shopping. United StatesChoose a country/region for shopping.
© 1996-2021, Amazon.com, Inc. or its affiliates