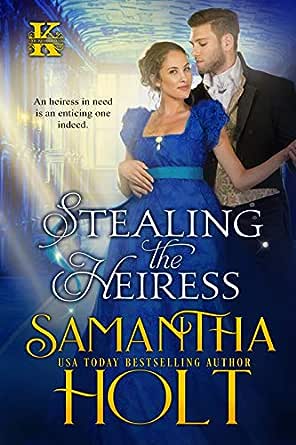 You've subscribed to The Kidnap Club! We will preorder your items within 24 hours of when they become available. When new books are released, we'll charge your default payment method for the lowest price available during the pre-order period.
Update your device or payment method, cancel individual pre-orders or your subscription at
Your Memberships & Subscriptions
There was an error. We were unable to process your subscription due to an error. Please refresh and try again. 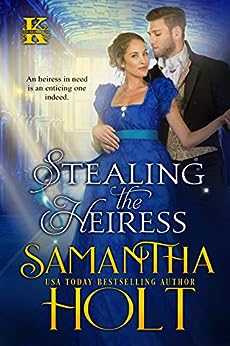 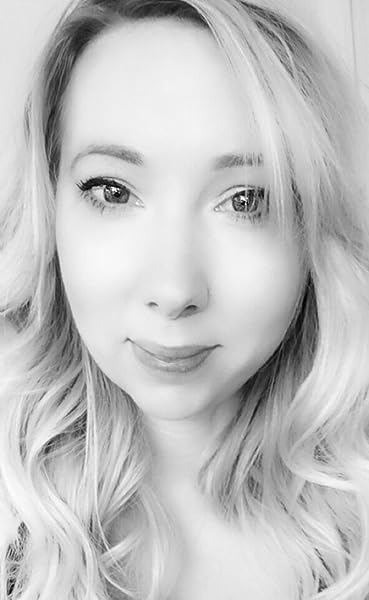 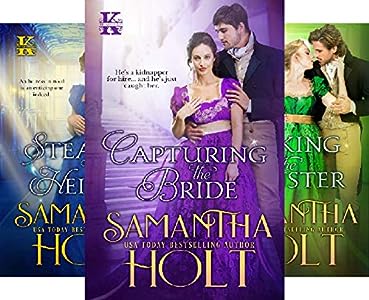 "I highly recommend this book to all historical romance readers who want some entertainment with good laughs, a lovely friendship, a little spicy romance and a HEA." - Amazon reviewer
"Delightful! Samantha brings this stunning, out of the box, refreshing spin, ratcheting up the exuberance and intensity, wrapping up one killer storyline and gripping plot, binding this baby together seamlessly." - Amazon reviewer
"You are in for some hot and steamy moments along with the adventure these two set out on. I loved everything about this book from the cover, to outstanding characters, to a truly well-written tale if you pick this one up you are in for treat." - Amazon Vine Voice

4.5 out of 5 stars
4.5 out of 5
177 global ratings
How are ratings calculated?
To calculate the overall star rating and percentage breakdown by star, we don’t use a simple average. Instead, our system considers things like how recent a review is and if the reviewer bought the item on Amazon. It also analyzes reviews to verify trustworthiness.
Top reviews

NavyWave62
TOP 1000 REVIEWER
5.0 out of 5 stars GREAT CHARACTER'S
Reviewed in the United States on June 1, 2020
Verified Purchase
Loved the banter and carefree attitude of the H/h. Our h is not one to do needlepoint or play an instrument, she seeks adventure as her beloved Uncle does. She has a closeness with this uncle and knows something is wrong because he has not written her. Of course, her family are not concerned because he has a wondering soul.

Our H meets up with her when he thinks she is someone else and kidnaps her by mistake and then the fun begins. I can't tell you how many times I laughed over their exchanges and how she always seems to have a knife handy to save herself.

There is some sad aspects related to our H and a major discovery that was a twist I didn't see coming - in a good way. I enjoyed when an author leads us down a path and we think - I know what is around the bend - BUT OH NO, you'd be incorrect - lol. Certainly kept the story interesting!

We are treated to suspense, mild violence, get dialogue, wonderful main and secondary character's and surprises. There is a secret the h discovers and keeps from the H. Her reasons are good, but when he finds out, he leaves. Thankfully he comes to his senses and the reason he returns is a revelation to him.

No cheating, no cliffhanger, HEA, romance and spice. I recommend this story and author. I own 36 stories by her so she is a favorite writer of mine. (ljb)
Read more
3 people found this helpful
Helpful
Report abuse

Molly Laird
5.0 out of 5 stars Great
Reviewed in the United States on May 29, 2020
Verified Purchase
I really loved (Rosie) Rosamunde Stanley character she is very hilarious and is an outspoken and she is a rich beautiful widow. This story is about how she gets kidnapped and the man kidnapped the wrong person. Marcus Russell grew up living on the street. He got contacted be take part in the Kidnap Club where they help ladies escape abusive situations. He got summoned to rescue Rosie. I really enjoyed the plot and story of this book.
Read more
One person found this helpful
Helpful
Report abuse

Cecilia Rodriguez
3.0 out of 5 stars Regency Era Walter Mitty
Reviewed in the United States on June 30, 2020
Verified Purchase
Twenty-five year old Lady Rosamunde Stanley is a widow and a day dreamer.
When she is accidentally kidnapped by Marcus Russell, Rosamunde takes the opportunity to have a real adventure.
Read more
One person found this helpful
Helpful
Report abuse

Lourena Phillips
2.0 out of 5 stars Good but explicit sex scene.
Reviewed in the United States on June 1, 2020
Verified Purchase
I enjoyed the heroine and the unconventional hero. I really wanted to see how it ended. However, there was no warning that this was an erotica book. I am just grateful that I realized it before recommending.
Read more
Helpful
Report abuse

Carma Rey Klaja
5.0 out of 5 stars Kidnapping gone wrong, or right?
Reviewed in the United States on May 29, 2020
Rosemunde Stanley Rothmere was tired of people trying to marry her off yet again. When her older husband passed after a short marriage, she wasn’t in a hurry to get back into a relationship. She wanted excitement, mystery, something to liven up her boring life. Her dreams have become her saving grace, filled with brawny highlanders and roguish pirates. Taking her cousin’s place on a weekend outing with her aunt leaves her life in peril, or does it?

Marcus Russell has been working for the kidnap club for a while and this latest job should be pretty standard. What he doesn’t expect though, is the spitfire he grabs for this mission. She doesn’t seem to want to follow through on her kidnapping arrangement at all. He finds out why soon after their escape, he’s grabbed the wrong woman.

Rosemunde was intrigued by the kidnap club and also with Russell. She convinced him to help her locate her wayward Uncle Albert. She was convinced, though no one else in her family seemed to be, that her dear uncle was missing and not simply on holiday. And while she was spending time with Russell, she could pepper him with questions. She was curious to know more about what the men did, and the women that asked for their help. Russell agreed to help her, much to his own dismay, but was that really what he wanted? Make no attachments was his motto, but Rosemunde made him stop and rethink those words often.

When Rosemunde finds out a secret about Russell, will she share it in hopes it brings him great happiness? Or hide it from him to spare him possible pain? I voluntarily read an advance copy without expectation for review. All opinions expressed are my own. Another wonderful read by the author. I loved revisiting old characters and seeing what they are up to now.
Read more
One person found this helpful
Helpful
Report abuse

MaryLou Hoffman
VINE VOICE
5.0 out of 5 stars FUN… WITH A CAPITAL F
Reviewed in the United States on June 8, 2020
STEALING THE HEIRESS is the second book in The Kidnap Club series. Each will stand on its own, but I recommend reading them all and in the order of release.

Spending time with Lady Rosamunde’s family is its own unique three-ringed circus, but that’s not enough adventure for her. She daydreams of pirates and Egyptian archeologists whisking her away on fanciful escapades.

Luckily, she is accidentally the unintended victim of a Kidnap Club quest when her cousin accepts the right proposal and fails to cancel the orders in time. Now, doesn’t that sound like the foolishness that would happen to me (or you) if we tried to set ourselves up for a kidnapping?

I loved the banter between Rosie and Russell. I loved the playful blackmail to get him to do what she wanted. I loved that Rosie loved her Uncle Albert so much – even if the rest of the family didn’t understand it was obvious that she and Uncle Albert were two peas from one pod.

I loved that Rosamunde wasn’t a simpering innocent. She is a widow with no time for foolish innocence or games, though she is still a proper and respectable lady. Not an easy line to hold even in modern times (maybe harder now).

The story was fun… capital F, Fun. There are only three men in The Kidnap Club. Two have fallen. The third is a duke. I can’t wait! The bigger they are…. And the other two have already fallen hard, so this should be really good!

Note: While I received this book as a gifted ARC via Booksprout, my opinions are my own and are given freely.

Sandra W
5.0 out of 5 stars A wild adventure packed with strong characters, heart & brooding charm!!
Reviewed in the United Kingdom on September 18, 2020
Verified Purchase
Rosamunde is a breath of fresh air. She is intelligent, witty, prone to fantasise and above all desirous of an adventure to lull her boredom - though never once dreamed of being kidnapped by mistake. Russell a member of The Kidnap Club, is mysterious in his allure, an exsoldier, street orphan and an elusive lonier who would really like it to remain that way, so why then does the firey Rosamunde seep so far under his skin?
It was one whirlwind ride, both entertaining and touching in it's charm, as Rosamunde slowly crumbles down Russell's walls and lights a burning desire, admiration and simmering passion between them, as she (and her endearingly madcap family) make him yearn for the unexpected - family, home and maybe, just possibly, a new life with her.
Unlike Russell whose smiles are hard won and elusively rusty, I was brimming with them throughout this tale. Not to mention, glued and eagerly anticipating the the next unexpected scenario, mishap, threat or sensually, sensationally tension fuelled, clinch.
Fun, full to exploding with highjinks, witty repartee and yearning passion, vulnerabilities and an abundance of captivating surprises as the pair embark on an adventure to hunt out her missing adventurer Uncle, Albert.
I have rarely enjoyed a tale so much! Wonderful!!
Read more
Report abuse

Mrs CM Rodgers
5.0 out of 5 stars A good series
Reviewed in the United Kingdom on October 15, 2020
Verified Purchase
I enjoyed reading the exploits of the Kidnap Club
Read more
Report abuse
See all reviews