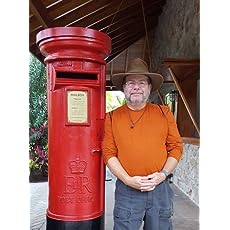 Labeled a "Web-naut" by Wired Magazine in 1996, Stephen Spanoudis has been editing and publishing online since the earliest days of the Web. Starting in 2014, he began creating The Republic of Dreams - a speculative fiction cycle that chronicles the lives of the Metro family, and the ways in which they influence the events of the 22nd century - a time when oceans have risen ten meters above 20th century levels and changed the face of the planet forever.

The latest volume, Wanderers, revolves around young Exander Metro, who is a magnet (his older sister says metaphor) for trouble, and his mother Admete, a woman with a hidden past who will do whatever it takes to protect her family. 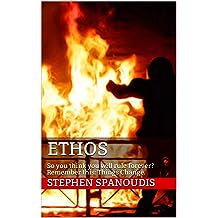 Ethos: So you think you will rule forever? Remember this: Things Change. (The Republic of Dreams Book 5) Jan 22, 2019
by Stephen Spanoudis
$4.99
There would come a time when she would be considered the most dangerous woman in the world, and that is a part of this story, but all lives, and all stories must begin somewhere. This story, in turn, is part of a larger narrative, for one day she will meet Wisdom, and everything will change. Her story begins in Patra, a Greek shipping port, and one of so many cities that changed dramatically when the seas rose seventy years ago and sparked The Last War.
Her parents gave her three of the most valuable gifts any parent can give to a child: a sense of purpose, an appetite for learning, and unwavering self-confidence. When they were found dead after a protest against the owner of the local cement company, her entire world vanished overnight. She was devastated, but where other children would have been thrown into shock and depression, her life would follow a very different arc.
She vowed that they would have justice and methodically plotted revenge. “For you,” she whispered. Even at age nine, Admete Christidou was not a person to trifle with. The same brilliance and determination that made her an exceptional student also made her a fearless and formidable enemy – a fact that her first victim, the owner of the cement company, would never know.


Set in the mid-22nd Century, Ethos tells the story of Admete Christidou, and how, with the help of a reformed alcoholic, a small bird, and Solon Metro - a statistics professor who is much more than he seems, she battles to silence a tyrant and inspire a nation. Her efforts become convolved with the Metro family, and she becomes part of the larger struggle that surrounds them - a surreal conflict between Life and Death that is epic in scale, with consequences that ripple across time, and across the planet.
Welcome to the Republic of Dreams, where unseen combatants wage a proxy war in a world that is equal parts science, history, metaphor and mystery. Ethos, book five in the series, unlocks the backstories of its intriguing characters. We learn their unspoken secrets and glimpse the hidden forces that cause their lives to collide in ever more unpredictable ways as the dangers that follow them escalate in scale and fury, until it becomes clear that the battles they are fighting, and the forces arrayed for and against them, transcend reality itself. 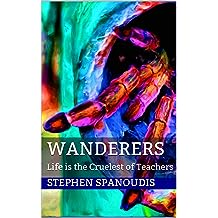 Wanderers: Life is the Cruelest of Teachers (The Republic of Dreams Book 3) Mar 9, 2020
by Stephen Spanoudis
$4.99
Solon Metro is torn between three seemingly never-ending struggles: trying to protect his wife Admete from the people who keep trying to kill her, battling to protect his adventurous young son Exander from the random mayhem that seems to follow him everywhere, and dealing with his creative but unlucky twin brother Costas, whose ventures sometimes have painful consequences that have led to a contentious relationship with their mystical sister Helene. Welcome to The Republic of Dreams, where unseen combatants wage a proxy war in a world that is equal parts science, history, metaphor and mystery. Set in the second half of the 22nd century, Wanderers, the third book in the series, follows parallel stories as one generation of siblings wanders between emotional compass points while the other wanders through a progression of new homes and new lives - each with its own hidden dangers.
Read more 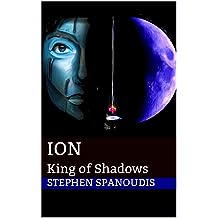 Ion: King of Shadows (The Republic of Dreams Book 6) Apr 25, 2020
by Stephen Spanoudis
$5.99
Set at the beginning of the 23rd Century, as the Game of Life and Death draws to its inevitable conclusion, Ion, book six of the series, follows the adventures of Exander Metro, his son Ion, Meredith’s daughter Jet, and the tribal crew of the Ghost as they venture into the past to unlock ancient secrets and find the Objects of Power needed to do battle with Death Himself.
Welcome to The Republic of Dreams, where unseen combatants wage a proxy war in a world that is equal parts science, history, metaphor and mystery. The proxy war is now out in the open, and the casualties mount rapidly as the encounters with unreality escalate in violence and heart-wrenching consequences until the conflict becomes global in scale and life itself hangs desperately in the balance. Will Ariadne, the global artificial intelligence, be the key to survival? The members of the Metro family? Zara Gee and the Alliance fleet? One of the Gods Who Remain? Or will it be Sinar and her fellow autons? Not even Ion himself can see where the future will lead them as they search desperately for a way to stave off the End.
Read more 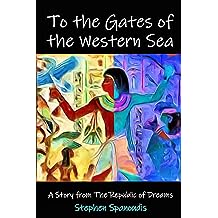 To the Gates of the Western Sea: A Story of The Republic of Dreams May 7, 2019
by Stephen Spanoudis
$2.99
Meryre of Akoris has travelled the known world as an Egyptian sailor during the reign of Mentuhotep II, the first Pharaoh of the Middle Kingdom. When his explorations take him beyond the known world - or at least the world as it known to Egypt, his adventures mount rapidly until one day, after meeting a doctor, a strange woman dressed in black, when they surpass the very limits of belief.

Welcome to The Republic of Dreams, a world made up of equal parts science, history, metaphor, and mystery. Some times that world is in the future, and sometimes, as in this installment, it careens over 40 centuries into the past to tell us the story of Meryre and his twin sister Merytre, their families, their lives, and Meryre’s far-flung travels. 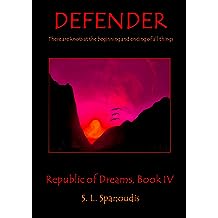 Defender: There are knots at the beginning and ending of all things (The Republic of Dreams Book 4) Dec 31, 2018
by Stephen Spanoudis
$4.99
Welcome to the Republic of Dreams, where unseen combatants wage a proxy war in a world that is equal parts science, history, metaphor and mystery.

Defender, book four in the series, is set at the end of the 22nd Century and follows the difficult life of Exander Metro, a man who has paid a great price for his heroism. He is now a ghostly shadow of his former self. He makes a long-awaited return to the Republic of Dreams and is proclaimed the King of Dreams, receiving the mysterious Crown of Fire, which Uira, Keeper of Legends, claims is an ancient object of power bestowed upon him by the gods.

He struggles to learn its secrets while dealing with an influx of pirates bent on taking over the Republic at any cost, and fighting his own private battle against the pain of his deteriorating body. When the anti-rejection drugs that keep him alive begin to fail, his friends and family can do little to help him, and Ariadne, the global intelligence he helped create, wonders if she can exist without him. The answer to understanding the Crown - and to his and Ariadne’s survival, might lie with his young son Ion, who sees the world as shadows of life and death that hint at the past - and the future. 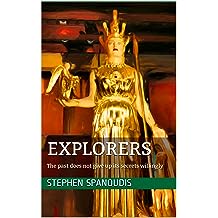 Explorers: The past does not give up its secrets willingly (The Republic of Dreams Book 2) Dec 26, 2018
by Stephen Spanoudis
$4.99
At age seventeen, Exander Metro already has a resume most people couldn’t fill in a lifetime. Not that it’s been easy. Hardly a year goes by when he hasn’t been dead at least once. How can he still be alive? The mysterious Woman in Black knows. So does Ms. Lim his T’ai chi instructor. His name marks him as “the Defending Man,” destined to play a key role in the Game of Life and Death - a game he must struggle to learn as the Fates themselves seem to argue over his existence. The next two years might just be the most dangerous of all, as unproven new technologies including a ‘magic’ diving suit invented by his Uncle Costas, enable him to delve into the sands beneath the Aegean Sea, bringing ancient artifacts, and the secrets they have kept buried for millennia, back into the light.

Welcome to the Republic of Dreams, where unseen combatants wage a proxy war in a world that is equal parts science, history, metaphor and mystery. Set in the second half of the 22nd century, Explorers, book two in the series, takes us to Greece to meet the extended Metro family, and then to California to meet Meredith Enarson, who, like Exander himself, may be an echo of something from the past, and may have a unique role to play in the Game - if she lives long enough.
Read more 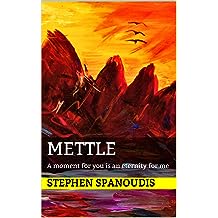 Mettle: A moment for you is an eternity for me (The Republic of Dreams Book 1) Dec 24, 2018
by Stephen Spanoudis
$4.99
Set in the second half of the 22nd Century, in a world where oceans have risen ten meters above current levels and changed the face of the planet, Mettle follows the adventures of Exander Metro, a young sea-energy farmer whose danger-filled past is written in the scars that cover his skin, and a novel artificial intelligence created by brilliant software architect Angela Gill. When the AI chooses Exander as the hero she will model herself after, what follows is an adventure whose outcome will have life and death consequences on a global scale.
Welcome to the Republic of Dreams, where unseen combatants wage a proxy war in a world that is equal parts science, history, metaphor and mystery. Mettle, book one in the series, introduces us to the Metro family, SEAPAC - the world’s largest corporation, and the Forgotten Ones, a tribe of outcasts whose Keeper of Legends, a mysterious old woman named Uira, wonders if Exander will be the key to their salvation, or cause their destruction. 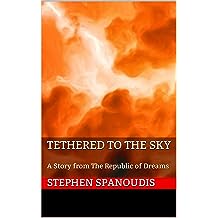 Tethered to the Sky: A Story from The Republic of Dreams Dec 23, 2018
by Stephen Spanoudis
$0.99
Join the crew of the Barton-3, a Coast Guard rescue airship, as the addition of a 'newbie' - a rookie crewman - has unexpectedly dangerous consequences. Welcome to The Republic of Dreams, a future world made up of equal parts science, history, metaphor, and mystery.
Read more 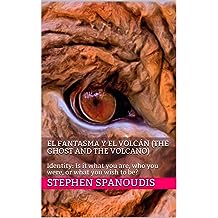 El Fantasma y El Volcán (The Ghost and the Volcano): Identity: Is it what you are, who you were, or what you wish to be? (The Republic of Dreams) Dec 23, 2018
by Stephen Spanoudis
$2.99
Benjamin Musa has a problem. It involves a volcano and forty-eight reclusive forest elephants who live on its slopes in eastern Costa Rica. The solution to his problem may involve an equally reclusive individual, el Fantasma (the Ghost) as he is known locally. Can Benjamin enlist his help? And can the Ghost succeed before Volcán Turrialba awakens? Welcome to The Republic of Dreams, a future world made up of equal parts science, history, metaphor, and mystery.
Read more