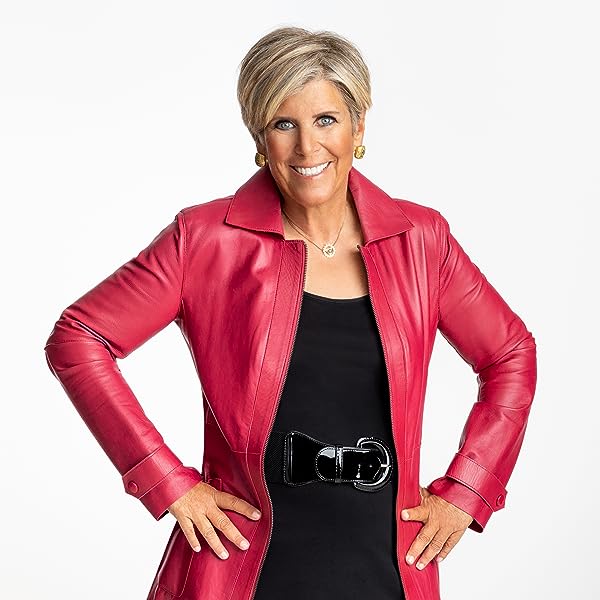 The 9 Steps to Financial Freedom: Practical and Spiritual Steps So You Can Stop Worrying Paperback – August 15, 2006

SUZE ORMAN is a two-time Emmy Award-winning television host and the author of nine consecutive New York Times bestsellers. Orman was named by Time Magazine as one of the most influential people in the world today.  A powerful motivational speaker, Suze hosts the award winning Suze Orman Show on CNBC, America's Money Class on OWN and Financial Essentials on QVC. A contributor to O the Oprah Magazine and the Costco Connection, Suze Orman is a force of nature and a one woman financial advice powerhouse.

What do you want from your money? College tuition for your kids? A bigger house and a new car? Security when you retire? Wouldn't it be great simply to have enough money so you don't have to worry?

The "enough money" part of that equation is easy. By the time you finish this book you will understand everything you need to know about managing and protecting your money and making it grow. The "so you don't have to worry" part is much more complex. It actually has nothing to do with how much money you have or how little. You can balance your checkbook until you're blue in the face, you can move money every day between your mutual funds, you can double your life insurance, you can buy lottery tickets--and none of it will do you any good until you get beyond the worry and fear. The fear of money, the fear of not having enough, the fear of having enough, the fear of taking action, the fear of inaction.

There isn't a part of our lives that money doesn't touch--it affects our relationships, the way we go about our everyday activities, our ability to make dreams reality, everything. Most of us, I think, have a core of anxiety that we carry around with us, though we may not admit it to ourselves. That is part of money's power over us.

From years as a financial planner I have learned that true financial freedom doesn't depend on how much money you have. Financial freedom is when you have power over your fears and anxieties instead of the other way around. That's why, in this book, we'll address first the fears, then the finances.

Whatever their circumstances--in debt, working, downsized, afraid of becoming downsized, retired, having just inherited money, having just lost money--my clients invariably arrive with a handful of financial papers and a heart full of anxieties. Like most certified financial planners, I started my practice to help other people with their money, but as time went on, I realized that it was far more than their money (or lack of it) that needed attention. Today new clients arrive expecting me to ask to see their papers. Instead I ask them first to share their fears.

It's never too soon to begin, and it's never too late, no matter how the bottom-line numbers read today on your particular handful of financial papers. This book presents a nine-step process that will take you back into the past, when your attitudes about money were born and began to grow. It will help you face the present honestly and clear the way for you to create a future you will love.

I know it works. As you read this book you will meet others who have taken the steps toward financial freedom--and finally made possible the lives they dreamed about.

You will also see that if I could do it against all odds, so can you. When I was very young I had already learned that the reason my parents seemed so unhappy wasn't that they didn't love each other; it was that they never had quite enough money even to pay the bills. In our house money meant tension, worry, and sorrow. When I was about thirteen my dad owned his own business, a tiny chicken shack where he sold take-out chicken, ribs, hamburgers, hot dogs, and fries. One day the oil that the chicken was fried in caught fire. In a few minutes the whole place exploded in flames. My dad bolted from the store before the flames could engulf him. This was when my mom and I happened to arrive on the scene, and we all stood outside watching the fire burn away my dad's business.

All of a sudden my dad realized that he had left his money in the metal cash register inside the building, and I watched in disbelief as he ran back into the inferno, in the split second before anyone could stop him. He tried and tried to open the metal register, but the intense heat had already sealed the drawer shut. Knowing that every penny he had was locked in front of him, about to go up into flames, he literally picked up the scalding metal box and carried it outside. When he threw the register on the ground, the skin on his arms and chest came with it.

He had escaped the fire safely once, untouched. Then he voluntarily risked his life and was severely injured. The money was that important. That was when I learned that money is obviously more important than life itself.

From that point on, earning money, lots of money, not only became what drove me professionally, but also became my emotional priority. Money became, for me, not the means to a life rich in all kinds of ways; money became my singular goal.

Years later this kid from the South Side of Chicago was a broker with a huge investment firm. I was rich, richer than I could have imagined. And I realized I was profoundly unhappy; the money hadn't bought or brought me happiness. So if money wasn't the key to happiness, what was? It was then that I began a quest, which has taken me deep into the meaning of life--and the meaning of money.

I don't know if I have discovered the meaning of life, but I have learned a great deal about what money can and cannot do. And it can do a lot. Your money will work for you, and you will always have enough--more than enough--when you give it energy, time, and understanding. I have come to think that money is very much like a person, and it will respond when you treat it as you would a cherished friend--never fearing it, pushing it away, pretending it doesn't exist, or turning away from its needs, never clutching it so hard that it hurts. Sometimes it's fatter, sometimes it's skinnier, sometimes it doesn't feel so good and needs special nurturing. But if you tend it like the living entity it is, then it will flourish, grow, take care of you for as long as you need it, and look after the loved ones you leave behind.

Most of us already know at least some of the steps we could take to free ourselves from money anxieties--we could manage our debt better, arrange for our children's education, strategically plan now for later, protect what we've saved, save more. Yet most of us are paralyzed, too, when it comes to actually taking these steps, however wise they seem, however much we think we really want to take control.

What good will it do you to know what you should do, if you can't do it?

The Nine Steps to Financial Freedom: A Preview
The first steps of this book take you back to discover why you don't do the things you know you should do and bring you beyond that--to where you can take action. These steps will free you to open up a dialogue about money with your parents, your children, and, most important, yourself. The next three steps are the laws of managing money. These laws are must-do's. They cover everything from wills and trusts and what insurance you need (and don't need) to new ways to think about debt and your 401(k) or retirement plan to how to invest and what to invest in. They teach you why you must trust yourself more than you trust anyone else with your money.

The goal of these particular steps is to make you as independent from financial advisers as possible. Over the years, I have learned that it is in my clients' best interest for them to take control over their money, not to relinquish it, even to me. If, later on, they choose to entrust their money to someone else, with these steps they would no longer be able to be taken advantage of by an unscrupulous adviser--or by their unwillingness to face up to the facts and figures of their own finances. Once you take these steps, you will discover the exhilaration that comes from wanting to deal with your money, not just having to deal with it.

The last three steps take you beyond the realm of finances, to the wealth that money can't buy.

When it comes to money, freedom starts to happen when what you do, think, and say are one. You'll never be free if you say that you have more than enough, then act as if and think you don't. You'll never be free if you think you don't have enough, then act as if and say you do. You will have enough when you believe you will and take the actions to express that belief. And you'll have more than enough when you realize that you can be rich at any income because you are more than your money, you are more than your job or title, than the car you drive or the clothing you wear. Your own power and worth are not judged by what money can sell and what money can buy; true freedom cannot be bought or sold at any price. True freedom, true wealth, is that which can never be lost.

Page 1 of 1 Start overPage 1 of 1
This shopping feature will continue to load items when the Enter key is pressed. In order to navigate out of this carousel please use your heading shortcut key to navigate to the next or previous heading.
Back
Next
Pages with related products. See and discover other items: investing in bonds, financial investing, debt management, credit investing, credit scores, retirement planning