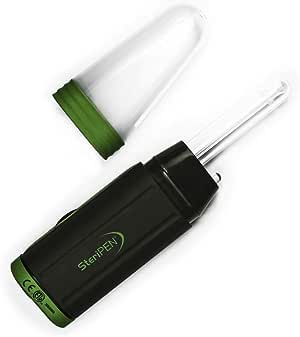 Brand: SteriPen
4.1 out of 5 stars 132 ratings
| 21 answered questions
Currently unavailable.
We don't know when or if this item will be back in stock.

Healthy Basics by Hape toys includes all your favorite wooden food basics! From eggs, to milk, to cheese and more, even the pickiest of eaters will be tempted to enjoy a healthy meal! These essential foods for the fridge and freezer are a great addition to any child's kitchen. Durable, kid friendly paint is the finishing touch on these products that are made of wood from sustainably sourced forests. Hape's toys stimulate children through every stage of development and help nurture and develop their natural abilities. All Hape products sold in North America meet or exceed all applicable safety standards.

Open Box - all accessories included - Like New, SAVE MONEY!!

4.1 out of 5 stars
4.1 out of 5
132 global ratings
How are ratings calculated?
To calculate the overall star rating and percentage breakdown by star, we don’t use a simple average. Instead, our system considers things like how recent a review is and if the reviewer bought the item on Amazon. It also analyzes reviews to verify trustworthiness.

Jeff Escalante
5.0 out of 5 stars Pays for itself
Reviewed in the United States on February 18, 2016
Verified Purchase
I picked up the steri pen because I knew I'd be traveling for a number of months in countries that didn't have clean tap water. I had been in a number of countries like this before, and it was a huge hassle to always lug around giant jugs of water, and constantly be in and out of the store picking up drinking water. Not to mention expensive -- you will rarely if ever find a bottle of water for less than $1. So if you plan on traveling in countries that don't have potable water for more than a month or two, this thing will pay for itself and start generating profits.

On top of that, a lot of the time stores are closed. If you run out of water in the evening, you're simply out of luck until the next morning when you can head to the store and pick up more. With the steri pen around, I always knew that I'd have water when I needed it.

Now this thing doesn't come without its drawbacks. It takes a while to sterilize water. It's about a minute and a half for a half liter, and you should be drinking at least 2 liters per day. It also needs a wide-mouthed container that is either a half a liter or a liter so that you can fit the steri pen in and stir it around. A standard water bottle isn't usually going to do the trick. But despite that, it's still an enormously useful and economic tool that I would say any serious traveler should have in their daypack at all times.

Rick in Virginia
5.0 out of 5 stars Reliable and easy to use
Reviewed in the United States on May 28, 2017
Verified Purchase
I have used SteriPen for a few years and am just now getting to writing a review. The simple review is that I like and trust using SteriPen Freedom. I use it mostly when hiking and fly fishing, so the water I use is out of mountain streams or in good flowing seeps and run-off. I like being able to drink and enjoy water fresh from the stream, cold mountain water. In some things, I believe in redundancy and having drinking water in the mountains is one of those things. So I do carry iodine backup just in case there is a problem with SteriPen, but have never had to use it.

SteriPen Freedom battery life is very good...easily lasts over a long weekend of hiking. It weighs next to nothing and kills viruses and bacteria. That is a good combination.
Read more
2 people found this helpful
Helpful
Comment Report abuse

EB
5.0 out of 5 stars Worked perfectly
Reviewed in the United States on May 16, 2014
Verified Purchase
I bought this steripen for a trip to Zambia. I used it to provide an extra measure of security for the water I drank and used to brush my teeth. I did not use it while camping or on any truly questionable water. The steripen worked great and I never needed to charge it on my trip. It saved me money by reducing the amount of bottled water I needed to buy. A couple of folks I traveled with who did not use the steripen had some stomach upset and I was fine on the whole trip. I'm glad I bought this. I kept the steripen in my carry on bag and security never questioned it.
Read more
15 people found this helpful
Helpful
Comment Report abuse

ED
4.0 out of 5 stars Good, Compact Water Purifier for Traveling
Reviewed in the United States on April 5, 2018
Verified Purchase
I recently saw some articles about people spending a ridiculous amount of money for “raw water,” which is the idea that water taken straight from the source — without any sort of treatment — will help strengthen your immune system and overall health by getting back to the natural environment from whence we originally came…or something.

To be honest, I can’t totally follow the logic behind it, and I’m pretty sure that anyone who believes in “raw” or “organic” water are the same folks who maintain that the Earth is flat and that vaccines are bad for you. The fact of the matter is that there is a lot of nasty stuff floating around in water that can make you sick, and a purification system of some sort can drastically reduce any unwanted illnesses and trips to the bathroom.

WHAT IT IS
Steripen’s Freedom Water Purifier is one of several ultraviolet water purifiers from the company, Steripen. The Freedom Water Purifier is supposedly their most compact version, which makes it ideal for foreign travel and backwoods excursions. Steripen claims that this product kills 99.9 percent of bacteria, viruses and protozoa that cause water-borne illness, and can purify 8,000 liters of water in its lifetime. It also doesn’t change the taste of the water, which is a plus. It’s basically a flashlight that you stick in your water (half a liter at a time) and swirl around for 48 seconds and the UV light kills all of the bad stuff, leaving you with safe drinking water.

WHAT I LIKE
I’ve used purification tablets before, and this thing is a heck of a lot easier than those. There are certainly cheaper ways to purify water (like the Life Straw), but I have yet to find one more compact, easy to use, and with the ability to purify as much water as the Steripen. It automatically turns on when it senses water and turns off as soon as the requisite amount of time has passed to obliterate any gut-busting microbes. No counting or responsibility on your part. Just stick, swirl, drink.

I have a tendency to get really sick when traveling, so I thought it was worthwhile to invest in something that would be the equivalent of a nuclear bomb for any organisms looking to wreak havoc on my GI tract. It also has a rechargeable battery built in, so you’re never stranded without juice because of not having a battery.

WHAT I DON’T LIKE
First of all, it is expensive, at least by my standards. I wish this was closer to a $30 price point, but Amazon currently lists it for $56. That being said, if you’ve ever had severe GI issues from water borne pathogens, then you can probably justify coughing up the extra $26 for peace of mind. Secondly, and this is going to sound weird, Steripen put some sort of coating around the body of the device to make it feel softer and give it more grip, and it turns into a gummy mess that picks up all sort of dirt and debris. It doesn’t need the coating in the first place, and it seems odd to use a material that’s going to attract dirt and stuff when it is literally going to be plunged into your drinking water. The good news is that this gummy coating can be scraped off as long as you are patient and persistent. Other than price and this other odd issue, I haven’t run into anything else I dislike.

SHOULD YOU BUY ONE
Do you get sick frequently when traveling or hiking? Have you ever prayed to the porcelain gods and promised to do whatever it takes to never be in that position again? Then yes, I would buy one. The fact that it is so portable really makes it a great choice. If the price was better and it didn't have that weird gummy film on the handle, then it would have five stars instead of four.

While traveling in Honduras with some friends, we used it pretty frequently when we couldn’t procure bottled water and nobody got sick on the trip. For me, this is a huge success given how many times it was used on local water sources. Without controlling for all of the variables, it’s hard to say if this was the Steripen or some good luck, but either way I was happy. Also, let’s be honest, it was probably the Steripen.
Read more

Amazon Customer
4.0 out of 5 stars Great product - Battery fail after 2yrs
Reviewed in the United States on April 10, 2020
Verified Purchase
I bought this product before traveling to India and south east Asia. It seemed to work great, and I never got sick when I used it - so I’d say it works. However, eventually the battery actually burnt up and charred the device. I’m not sure exactly when this happened but I believe it was after a couple years. Luckily, nothing caught fire and nothing else was damaged since it was enclosed in its case. The only reason I could think this might have happened is if the battery got to low for too long and I kept going up and down in elevation? Unsure.

Nonetheless, I still believe it was worth it and is a good product.
Read more
Helpful
Comment Report abuse
See all reviews