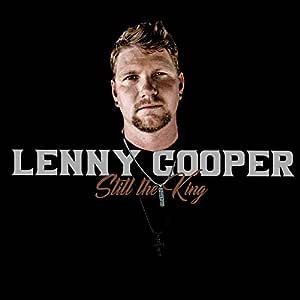 Add to Cart
$17.08
+ Free Shipping
Sold by: i-Deals Store
Have one to sell?
Sell on Amazon

Lenny Cooper (Artist) Format: Audio CD
5.0 out of 5 stars 2 ratings
See all 3 formats and editions Hide other formats and editions
Includes FREE MP3 version of this album.&nbspProvided by Amazon Digital Services LLC. Terms and Conditions. Does not apply to gift orders.&nbspComplete your purchase to save the MP3 version to your music library.
Available at a lower price from other sellers that may not offer free Prime shipping.

Proudly known as the Mud Digger King, Lenny Cooper lives up to his muddy moniker on his new album Still The King, the long-awaited 12-track collection featuring some of country rap s hottest artists including Smo, Young Gunner, David Ray, Anthony Beastmode and J Roosevelt. Mixing moonshine, backwoods fun and a little mud, the songs on Still The King mirror the carefree Southern lifestyle of Lenny Cooper and his dedicated fan base. Themes of working hard, playing harder and loving God and Family run through the new beats-driven offering. Cooper rolls up his sleeves to deliver an authentic collection of songs which includes the standout Country Made, featuring J Roosevelt; the working-man s weekend jam I ll Drink To That, featuring Smo and David Ray; the bumpin title track Still the King ; the defiant We Gone Ride and the four-wheeling, mud-bog anthem Mud Fly featuring Anthony Beastmode and Young Gunner. Cooper also introduces wildly popular up-and-coming female country rapper Shelby Kay and Matt Tucker on Outta Me. With more than 227 Million lifetime streams on Pandora alone (3 million streams per month), Lenny Cooper s audience continues to grow with each new album. Cooper has sold over 500,000 copies of Average Joes' popular Mud Digger compilation series and has tens of millions of YouTube Views, including over 13 million views of his Mud Digger video alone. Major media outlets such as The Wall Street Journal, New York Times and USA Today have all recognized Cooper as a star in the country rap genre and applauded his ability to relate to and grow his audience.