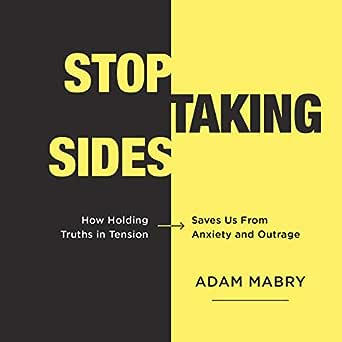 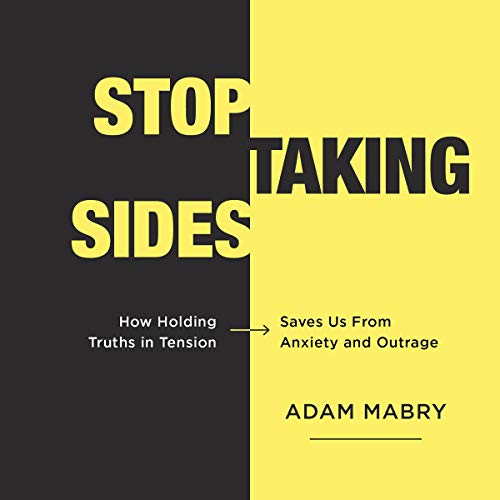 4.7 out of 5 stars
4.7 out of 5
18 global ratings
How are ratings calculated?
To calculate the overall star rating and percentage breakdown by star, we don’t use a simple average. Instead, our system considers things like how recent a review is and if the reviewer bought the item on Amazon. It also analyzes reviews to verify trustworthiness.

Jared Kirk
5.0 out of 5 stars An Important Discipleship Tool in Divided Times
Reviewed in the United States on September 10, 2020
Verified Purchase
Our world is divided into factions. The tribalism of older times has reared its ugly head in racism, partisanship, and other insidious forms. And due to the influences of technology and social media our society is only becoming more fractured.

That's why I'm so thankful for Pastor Adam Mabry's work Stop Taking Sides. I found the basic concept of the book refreshing in itself. To summarize, God has left us his word and it is full of tensions that he refused to resolve for us in neat ways. Learning to live with these tensions produces in us the kind of virtue and character necessary for navigating a wider world full of those same tensions.

Aaron
5.0 out of 5 stars Convicted and Challenged
Reviewed in the United States on September 15, 2020
Our world is divided. It seems that we all fall into one of two categories: “us” and “them.” And for those of us who are Christians, we can see this type of thinking pitting us against our own brothers and sisters of the faith. In Stop Taking Sides, Adam Mabry shows us how holding truths in tension saves us from anxiety and outrage.

In less than 200 pages, Mabry writes warnings for those of us who have drawn lines where God has not. And he gives hope for unity and uninhibited love. To be sure, Mabry begins the book by stating that there are some truths we cannot compromise on. These include God is God, God creates, Jesus is Lord, and we are saved by faith - not works.

He then takes us through 9 pairs of truths, showing how we can embrace the tension, grow in virtue, and gain a fuller experience of the Christian life. Topics include: divine sovereignty and human responsibility, the paradoxical Christian life of victory of suffering, and our God is a God of love and wrath. Mabry uses both personal examples and Scripture texts to prove his points.

I was most challenged by Chapter 8: Strong and Weak. Mabry admits that he has a strong personality, and he makes this bold statement (warning: language) – “Turns out that holiness and assholey-ness aren’t quite the same thing.” He points us to Jesus and meekness, and I again must repent of my sinful words, attitudes, and actions that stem from my pride and (wrongful) sense of power.

The book ends with an excellent example of how God is both I and We. This demonstrates the individuality and unity of the Trinity. Mabry is quick to point out how this theological concept and divine reality should impact our family life, political preferences, and church community.

This book was a difficult read for me – not because it was poorly written, but because it was written so well. I was convicted and challenged. I tend to see things in black and white, I make my own boundaries, and I wall myself in. But this book shows me a better way: let go of our tribes and cling to Christ. Love and justice meet at the cross. And I think that’s where I’ll put my stake in the ground as well.

I received a media copy of Stop Taking Sides and this is my honest review.
Read more

Panda Incognito
3.0 out of 5 stars Encourages Humility, but Doesn't Generalize Enough to Politics
Reviewed in the United States on September 17, 2020
Adam Mabry begins this book with an anecdote about church members from opposite ends of the political spectrum who separately criticized him for the same sermon, incensed that he had not taken their side. He found this absurd, funny, and infuriating, and writes in this book about how vital it is for Christians to seek unity instead of demanding that their pastors and church communities espouse all of their political views. Even though he honors the role of politics in its proper place, he emphasizes how vital it is for Christians to listen to other viewpoints and learn to hold different truths in tension instead of camping out in a specific political or theological tribe and vilifying everyone else.

This book initially sounds politically focused, and includes many different references to politics, but it focuses more on theological beliefs. Each chapter addresses a specific tension between different truths, such as God’s sovereignty and our responsibility, and even though this provides a model for how Christians can seek truth and hold a balanced view, only a few of the chapters specifically address politics. The chapter that contrasts individualism versus collectivism is particularly good, engaging with the positive and negative elements of both, but it is one of the only chapters that delves into current political conflict. For the most part, this book deals with theological views, showing how even though people tend to choose to camp out with their preferred element, we need to hold issues like God’s love and wrath in tension, since the Bible explicitly teaches both.

This book’s content can be very helpful, but even though it is important for Christians to step back from side-taking and hold biblical truths in tension, this model is only marginally helpful for evaluating different political ideologies. There are some political views and ideas that people can hold in tension, but many are mutually exclusive, and others are so flawed that even though they might have policy-based merit, we would not hold them as intangible truths. Christians can hold seemingly contrasting biblical teachings in tension, since both views come from God’s revealed Word, but it is a different matter entirely to deal with ideological and conscience-based political leanings and policy issues.

This book encourages Christians to seek unity, refuse the comfort and ease of partisanship, and live in the tension between different beliefs. This is all admirable, and I appreciate the book’s strong message against our outrage society, but this book does not live up to its title. Also, even though skeptics and people outside the church might be interested in a book like this, the heavy focus on theological debates will be irrelevant them and their personal backgrounds. Even though this book makes some great points and has a stirring, much-needed message, I would only recommend this to Christian audiences, and would give the clear caveat that even though this book will encourage them in humility and unity, it will not help them resolve their pressing political dilemmas.
Read more
One person found this helpful
Helpful
Comment Report abuse
See all reviews

Val
5.0 out of 5 stars Heart Check
Reviewed in the United Kingdom on November 23, 2020
Verified Purchase
‘The writer (Adam Mabry) provides a challenging asssessment of our attitudes and prejudices, pointing us to Jesus and his desire to remake us into his image.
Read more
Report abuse
See all reviews