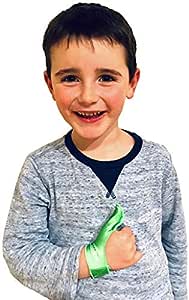 3.3 out of 5 stars
3.3 out of 5
202 customer ratings
How does Amazon calculate star ratings?
Amazon calculates a product’s star ratings based on a machine learned model instead of a raw data average. The model takes into account factors including the age of a rating, whether the ratings are from verified purchasers, and factors that establish reviewer trustworthiness.

THP
4.0 out of 5 stars It worked, but takes time
Reviewed in the United States on December 25, 2019
Verified Purchase
My 3 years old has been sucking her thumb since 3 months old. She does it to help her fall asleep at bedtime and to lull herself back to sleep when she wakes up in the middle of the night. Her thumb has a big callus due to it, also I am afraid she might damage the alignment of her teeth. I got this to stop her bad habit, the first few nights was difficult. After 4 months of wearing this to sleep she finally stopped sucking her thumb.
Quality not the best, but at least it helped her.

Momma Monica
5.0 out of 5 stars Our dentist recommended this kind of thing for our 9 year old ...
Reviewed in the United States on March 9, 2018
Verified Purchase
Our dentist recommended this kind of thing for our 9 year old son, who had sucked his thumb since infancy. It was effecting his teeth. Our son was ready for the change and THAT is a big part of it. HE wanted to stop. He only sucked his thumbs at night and didn't know how to stop. He chose the color and was excited when they arrived. They worked like a charm. We bought him legos as a reward at the end of idk 60 days. He's almost 11 now and hasn't even used the thumb guards for over a year. These costed way less than future braces. Although he may need braces anyway. At least his teeth won't be as bad as they could have been. I definitely recommend this product. The greatest thing they gave my son was an increased sense of self confidence.
Read more
3 people found this helpful
Helpful
Comment Report abuse

Mariaj480
2.0 out of 5 stars There are better ones out there.
Reviewed in the United States on May 26, 2020
Verified Purchase
I have had my son using these for about a year.
We have gone through SO many pairs, and they all eventually get fuzzies from the fabric breaking down, velcro looses grip, or tears along the thumb.
Also, my kid started to just pull the thumb cover off, (keeps it around his wrist) and sucks his thumb anyways.

We use a DIFFERENT KIND now that is more durable, covers more of the hand, comes as a set of two, has a snap fastened instead of a velcro fastener and it has worked much better. The price is higher, but in the long-run I've saved money by only buying one set. We've had them for 5 months and they are both in perfect condition even after many washes. He does not cheat with those.

Lisa L. Reynoso
5.0 out of 5 stars It worked great for my 6-year-old!
Reviewed in the United States on March 29, 2019
Verified Purchase
It was nice to be able to buy just one, since my son only ever sucked one side. He is 6, and was motivated to try to quit. He had quit sucking during the day a couple years back, but at night he would fall asleep and the thumb would just slip in. Once we had this, we put up the accompanying chart and promised him something nice when he made so many weeks. He got soccer shoes! It worked very well. Within a few weeks, he would wake up with hands at his sides instead of up by his head, and it was effectively painless for him to quit the night-thumb-sucking habit. Just in time for those adult teeth that are coming in!

As to quality, it was cheap. Don’t expect it to last long, but it works well enough, and was easier to use than tape or something else. Having a choice of colors helped; he likes green, so we got green.
Read more
Helpful
Comment Report abuse

Kelli McDaniel
1.0 out of 5 stars Overpriced
Reviewed in the United States on February 15, 2019
Verified Purchase
Great idea, but this material literally started fraying after the first day we used it. It's soft and comfortable, but it is not durable. I was afraid to even wash it. I can't believe I paid as much as I did for this product. My daughter lost it about a week after we got it, so I had her put a winter glove on and it has been just as efficient as this thumb guard. Only wish I would have thought of that sooner to save me time and money.
Read more
3 people found this helpful
Helpful
Comment Report abuse

Amazon Customer
5.0 out of 5 stars Great reminder if ready to stop thumb sucking
Reviewed in the United States on January 3, 2012
Verified Purchase
I actually bought a thumbuster when my daughter was 4-5 yrs old, and she was doing ok with it until she lost it. Since then we've tried a few different things, including a terrible tasting nail polish provided by her dentist, all to no avail. I was considering and had spoken to her dentist about a very expensive and obnoxious dental appliance, but wanted to give the thumbuster one more shot before going that route.

Fast forward a few years and my daughter still had her thumb in her mouth constantly, often without even realizing it. Her 2nd grade teacher had brought up her thumb sucking in our conference earlier in the week. I looked up the thumbuster on the internet, showed it to her, talked to her about wearing it and what it was for. She agreed she wanted to try it gain and I let her choose the color (green). I ordered our second thumbuster in December 2011. It arrive quickly, just a week before my daughters 8th birthday. She was excited and put it on right away. She has now been using it for about one month and I only caught her sucking her thumb one time on day two. She started off wearing it at all times, to school, to bed, to the doctor...only taking it off to eat, use the restroom, and in art class. She wears it a lot less now, but has managed to keep her thumb out of her mouth even with it off. She hung the chart on the fridge and asks everyday if she can put a sticker on it. I think it stays in her pocket now more than it does on her, but as long as she's not sucking her thumb, I don't care. A month after our second round with the thumbuster, I am cautiously optimistic that she has finally been able to break the habit for good!

Things to keep in mind:
- Your child needs to be motivated to stop sucking their thumb. The thumbuster is only held on by velcro and is easily removed if they want to take it off.
- Yes, it will get horribly dirty and pilly...they are wearing it all the time! Throw it in the wash.
- I've read other reviews that it wasn't durable, but both of the ones we've used survived with no holes, tears, etc. I tried making my own after she lost the first one years ago and the one I made had holes in it in just a few days.
- It's made out of a thin spandex type material. It was a bit big when she was 4, and fit perfect when she was 8, but it still wasn't clumsy when it was a little big. She never complained about it being uncomfortable and she was able to do whatever she wanted while wearing it. She only took it off when she worried about getting it dirty.
- I wish it came with GPS so we could find it when it got lost!!

Just with they came with a GPS locator for when they got lost!
Read more
9 people found this helpful
Helpful
Comment Report abuse

K. Mckinn
5.0 out of 5 stars Miracle worker!
Reviewed in the United States on June 12, 2014
Verified Purchase
We could not get my son to stop sucking his thumb. Tried the bitter nail polish, he would scrape it off with his teeth, rinse his mouth, and go back to sucking his thumb. Rewards/punishments didn't work. Finally when he hit 6 years old, we had to really put a stop to it. This thing worked. Took about 2 weeks and he stopped sucking his thumb during the day time. Was able to keep it off him all day. About another 2 weeks later we tested him without it at night and it had broken the habit. At that point my son was ready to stop he sucking his thumb, he needed something to stop the habit.
Read more
5 people found this helpful
Helpful
Comment Report abuse
See all reviews from the United States

Sangita
1.0 out of 5 stars One Star
Reviewed in India on March 24, 2018
Verified Purchase
No point wasting money.
Read more
One person found this helpful
Helpful
Sending feedback...
Thank you for your feedback.
Sorry, we failed to record your vote. Please try again
Report abuse

Page 1 of 1 Start overPage 1 of 1
This shopping feature will continue to load items when the Enter key is pressed. In order to navigate out of this carousel please use your heading shortcut key to navigate to the next or previous heading.
Back
Next
Pages with related products. See and discover other items: thumb guards