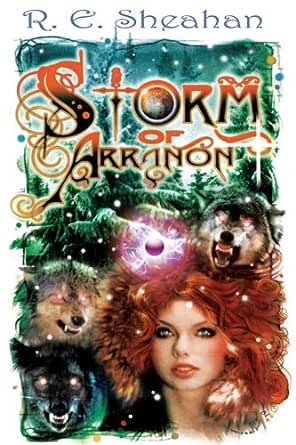 You've subscribed to Storm of Arranon! We will preorder your items within 24 hours of when they become available. When new books are released, we'll charge your default payment method for the lowest price available during the pre-order period.
Update your device or payment method, cancel individual pre-orders or your subscription at
Your Memberships & Subscriptions
There was an error. We were unable to process your subscription due to an error. Please refresh and try again. 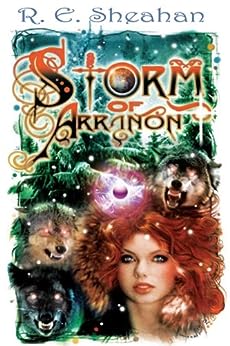 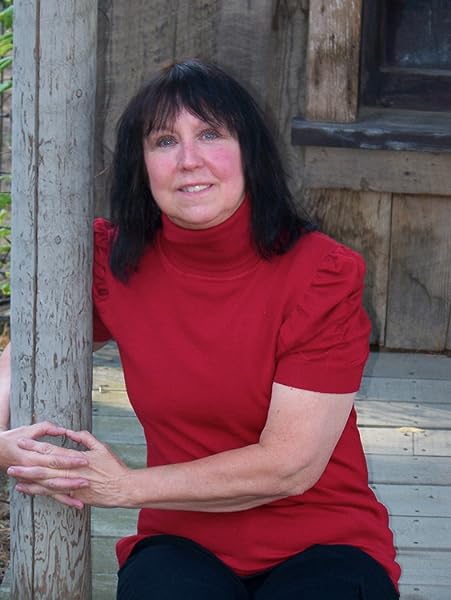 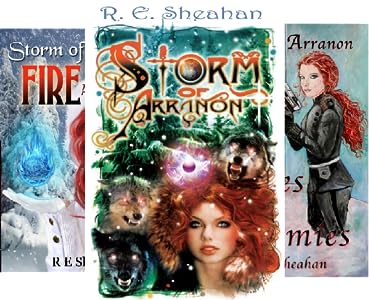 Lieutenant Erynn Yager is a remarkably gifted young pilot-in-training, the adopted daughter of a commanding general, and the genetic offspring of two races forbidden to procreate--the result is that she possesses great powers that connect her to the world of Arranon, a connection that others require in order to take over the system. The author of this book has created an intricate world with societies, cultures, flora, and fauna that leap directly off the page. Although some of the science-fiction plot points boarder on genre cliche and there are occasional bursts of overwritten prose, the book has a strong narrative and exciting action sequences. The story jumps around between secondary characters a bit too often to fully develop them, but Erynn is a strong female character who can hold her own.

R E Sheahan lives in the beautiful Pacific Northwest. --This text refers to the paperback edition.

4.0 out of 5 stars
4 out of 5
59 customer ratings
How does Amazon calculate star ratings?
Amazon calculates a product’s star ratings based on a machine learned model instead of a raw data average. The model takes into account factors including the age of a rating, whether the ratings are from verified purchasers, and factors that establish reviewer trustworthiness.

NfRtB
2.0 out of 5 stars The basic premise of this novel is really interesting. The execution? Not so much.
Reviewed in the United States on December 21, 2016
Verified Purchase
For me, this one just never seemed to achieve a good pace and stylistically, there were a lot of issues. I often found my attention wandering, so needless to say, it was a long journey to get to the end. What follows are the main problems:

1. Characters. The characters could have been complex and interesting, and at times, they almost were. Ms. Sheahan’s characters don’t talk like real people. The dialogue is stiff and stilted, usually due to the exposition that followed almost every line and kept the conversations from achieving any kind of comfortable flow. They make unlikely decisions. For example, no military man worth his salt would choose a very public, very crowded bar as the setting for imparting sensitive, potentially life-or-death information to a near-stranger (like Athru did with Erynn in the first few chapters—it doesn’t matter that she already knew, there was an entire bar full of eavesdroppers). The relationship-building between characters was also lacking…so much so that I had to double-check that this was, indeed, the first book in this series. It is. The reader seemed to be expected to just know why and how people were connected. The lack of explanation made it difficult to feel the impact of betrayals, decisions, and general character actions.
2. Phrasing and vocabulary. There are a lot of repetitive phrases in “Storm of Arranon”, including “his dark eyes”, and “not good” being its own sentence. There were also a few instances of problematic word choice (passed vs. past, for example) While I can appreciate poetic descriptions, but there were many instances when that was both poorly timed and distracting. For example, when Erynn is fleeing Birk on Arranon…these passages were clearly meant to be tense, pulse-pounding, on-the-edge-of-your-seat, and yet there was a huge amount of poetic, flowering descriptions of the landscape and weather. I understand trying to set a scene, but this was overkill. Seriously, is this a chase scene or a scenic tour?
3. Details and pacing. This was probably one of the biggest issues I had with “Storm of Arranon”. I was pretty upset to discover that this was yet another novel that was sloppy with its details. Characters do things that would be physically impossible for them to do (i.e. Jaer’s last opponent while Erynn is being kidnapped), as if Ms. Sheahan wasn’t paying attention to what her people were doing from one sentence to the next. This book also failed in the area of pacing. Some scenes drug on forever when they didn’t seem all that important, and then important scenes were rushed through. The flight from the Interceptors that crashes Birk and Erynn on Arranon happened so fast it was hard to get a scope of timing and distance. I was left feeling lost and frustrated on a number of occasions.

Don’t get me wrong, the basic premise of this novel is really interesting. A young woman who is the product of a forbidden union who is raised as a ‘normal’ citizen of one world and is then called upon to help save both…I wanted to read that story! Erynn sounded like an interesting, complex person that I could root for. Unfortunately, a lot of elements (including the almst-instalove romance and imparting of back-story through villainous monologing) were just downright cheesy.

Bottom line: Interesting premise, sloppy execution. I found myself wishing the author had spent less time making up a language and more time developing her characters and plot. Just because something is written for the YA audience doesn’t give it a license to be vague or rushed. I would tentatively recommend this to sci-fi fans, with the caveat
Read more
6 people found this helpful
Helpful
Comment Report abuse

Kate
2.0 out of 5 stars Could have been written better
Reviewed in the United States on September 25, 2018
Verified Purchase
The premise of STORM OF ARRANON seemed interesting – a young woman of forbidden mixed race with remarkable powers called upon to save the two worlds of which she is both from – but the execution felt lacking. The novel started out strong; the first chapter especially was in the perspective of the story’s main antagonists and it promised thrills and excitement. But it quickly receded in the next few chapters.

The characters could have been more developed and more complex but for a huge chunk of the book, they simply were not. There is stiffness in the way the characters interact with each other, perhaps due to the dialogue being stilted.

You tend to believe the relationships between the characters when you get to witness how such relationships developed. That is how readers’ empathy build up and how they start to root for the characters and feel what they are feeling. In the case of STORM OF ARRANON, this was either not present or too rushed. In effect, the huge betrayal in the first half of the book was like a soft droplet of water rather than a crashing wave, and the main romantic element seemed cheesy. There was also a problem with the pacing of the entire book. There were certain parts that dragged on when it wasn’t necessary, and parts that were vital to the plot that was hastily written.

S. J. Main
5.0 out of 5 stars becomes her love interest however the story mostly focuses on Erynn
Reviewed in the United States on December 15, 2016
Verified Purchase
Erynn is an intercept pilot. There are things she knows about her past that influences the future. Her father is from Arranon, and her mother is from Korin, enabling her to have powers from both sides within her. When Korin and Arranon are at war, she discovers exactly what these powers are and learns about a prophecy that is connected to the planets. She can save everyone only if she finds the way to unlock it.

Jaer, the handsome hero that assists Erynn in escaping, becomes her love interest however the story mostly focuses on Erynn. This heroine has the ability to connect to animals, and that was a sweet touch to the story. The book is packed with drama, and the author manages to create a beautiful fantasy world that one could vision in their mind as they read it. There is plenty of action, fighting, tension, and suspense.

This science fiction story has a fascinating plot and interesting character building. The ending is not like the normal kind you read and provides anticipation for wanting more, yet not displeased with the outcome.

There are many authors that tend to mix in various genres with their plots but are not that skillful in succeeding. They often confuse the reader or get them lost in their thoughts, however, Storm of Arranon is an exception. You sincerely feel the emotions, the turmoil and understand the story completely. The literary standard of this book was in such capacity, where you would feel and grow with the characters. This factor alone should earn and qualify the book to be four stars.

This book is suitable for young adults as well as anyone that likes to read on science fiction & fantasy.

The only thing I would change is the cover. It is absolutely hideous, and I am not sure why the author selected it unless she wanted to make the following point:

Don’t judge a book by its cover.

David Hartlebury
4.0 out of 5 stars Interesting mixture of magic and science fiction
Reviewed in the United Kingdom on September 24, 2016
Verified Purchase
An interesting and entertaining book. It was very good at mixing magic, animal interaction and science fiction battles. An alien invasion and espionage leads to an understanding of power through a connection to magic! An interesting concept! The second book in the series will need to be different to capture the same interest.
Read more
Helpful
Sending feedback...
Thank you for your feedback.
Sorry, we failed to record your vote. Please try again
Report abuse