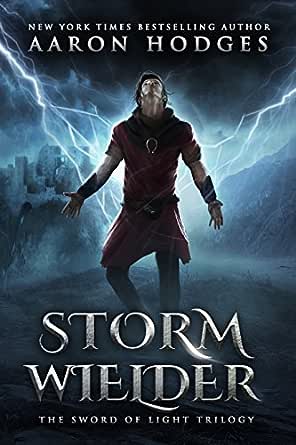 You've subscribed to The Sword of Light Trilogy! We will preorder your items within 24 hours of when they become available. When new books are released, we'll charge your default payment method for the lowest price available during the pre-order period.
Update your device or payment method, cancel individual pre-orders or your subscription at
Your Memberships & Subscriptions
There was an error. We were unable to process your subscription due to an error. Please refresh and try again. 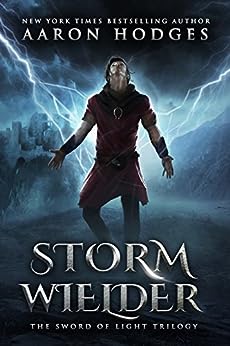 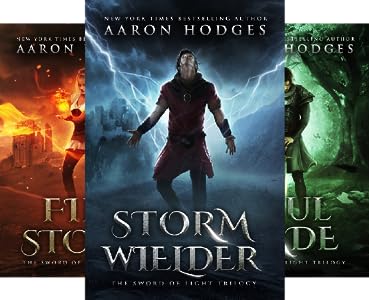 "The plot is excellent, the characters are complex with hidden agendas and resolute desires to at least leave behind some good in this world. The battles are breathtaking--without giving too much away, let me say that Balistor's final battle is definitely cinema-worthy. The explanation of magic is astounding, showing its complexity, richness, and unpredictability." - Future Boy

"This is the first book of the Sword of Light Trilogy. Eric is a young man with powers that is capable of wielding mass destruction. He doesn't know how to control it, so he spends much of his time in exile from anything and anyone that he knows. That is until Alastair, a mysterious old man, who seems to know more about Eric that even Eric does. After Eric unintentionally destroys a town, he and Alastair set out to escape from Eric's enemies. Through his guilt of destroying people's lives, Eric has to fight for his own while learning to control his powers. During the times you think it can't get any worse on their journey, you find that you're wrong." - Angela Kay Books

Aaron Hodges was born in 1989 in the small town of Whakatane, New Zealand. He studied for five years at the University of Auckland, completing a Bachelor’s of Science in Biology and Geography, and a Masters of Environmental Engineering. After working as an environmental consultant for two years, he now spends his time traveling the world in search of his next adventure.

4.2 out of 5 stars
4.2 out of 5
239 customer ratings
How does Amazon calculate star ratings?
Amazon calculates a product’s star ratings based on a machine learned model instead of a raw data average. The model takes into account factors including the age of a rating, whether the ratings are from verified purchasers, and factors that establish reviewer trustworthiness.
Top Reviews

T. Edmund
2.0 out of 5 stars Wanted this to be better
Reviewed in the United States on May 12, 2017
Format: Kindle EditionVerified Purchase
I began Storm Wielder quite hopeful. The cover art and all aesthetics of the book were great, and the prose was very polished. A few pages in, there were a few clunks, the prose was a bit 'telly' and at times the language was a bit anachronistic. Nonetheless there was a good setup, and I was interested to see where the story would go.

About halfway however the story and my enjoyment took a big hit. I don't want to heap criticism on a work that Hodges clearly put a tonne of effort in but I will provide enough evidence to justify my stance.

The first problem is that 50% of the way in the story presented a well constructed tension - a young man with out of control magic being helped by a mysterious mentor while a victim of his power stalks them with vengeance on the mind. What I particularly liked about the story is that Gabriel, a man who had lost his family due to the MC's power was not a completely unsympathetic villain, there was real potential of genuine moral conundrum in how the plot resolved. Instead we get introduced to a Goddess, a mass of exposition is dumped upon us and the plot abruptly changed to trying to hunt down an important little girl. A half dozen characters get shoe-horned into the story without much hullabaloo and I'm not even 100% on what happened to poor Gabriel (but I have a feeling he got squished by a dragon)

Most of my other concerns stem from this basic problem - the characters had far too much emotion, and not enough emotional arc, as they pursued a goal that I myself had no investment in, and rather than proper story conflict the goodies just had bigger and bigger baddies thrown at them, which were CONSTANTLY just defeated by more and more magic.

I would love to read an alternate version of this novel where the initial characters were more fleshed out and the morality of out of control magic actually addressed. After all the main character did destroy an entire village, killing maybe hundreds of people a fact which seemed swept under the rug at some point of the story.

The opportunity to read this was much appreciated and I wish the author all the best for the series and others he has published. Considering this is a first novel its about 1000x better than most of the dross us writers produced upon first attempt.
Read more
30 people found this helpful
Helpful
Comment Report abuse

Platypire Bob
4.0 out of 5 stars Bob @ Platypire Reviews
Reviewed in the United States on May 18, 2017
Format: Audible AudiobookVerified Purchase
*I received a copy of this audiobook to be honestly reviewed*

So, this was pretty good! It was very engaging, the characters were good, and tempo to the story was good, too. I loved the variety of creatures and how everything interacted in this. The narrow escapes and constant running kept me hooked until t was over, and I mean that I was in it enough that a certain bit made me cry.

The narrator was okay. His voice and speed are pleasant, but I wasn't thrilled with his character voices. He had three voices: one for narrating (which was great!), one for men, and one for females + Eric. He wasn't bad at all, it just threw me out of the spell some.

If you like epic adventures, you'll most likely enjoy this.

Dawn
4.0 out of 5 stars It was pretty good
Reviewed in the United States on December 6, 2017
Format: Kindle EditionVerified Purchase
This book grabbed me pretty fast and drew me in. The romance scenes seemed forced and out of place and didn't really do anything to further the plot, so in my opinion the book would've been better without them. But overall, this was a really good story. The author did well in showing the story and making you care about the characters. There were a few typos, but I'm the kind of person who finds them even in Stephen King books - it happens; none of it was anything major and didn't detract from the story.
Read more
2 people found this helpful
Helpful
Comment Report abuse

Kindle Customer
3.0 out of 5 stars A Stormwielder's Magic
Reviewed in the United States on April 20, 2019
Format: Kindle EditionVerified Purchase
An interesting novel, and kept me coming back to see where it was going. The convolution(s) also had been annoying and the story ended with a cliff hanger! Fantasy adventurers may enjoy.
Read more
2 people found this helpful
Helpful
Comment Report abuse

Kindle Customer
5.0 out of 5 stars Storm Wielder
Reviewed in the United States on March 12, 2019
Format: Kindle EditionVerified Purchase
I love His books. I have already read several and each time they come out I have to read them. He keeps u glued tothe book and wanting to finish the first so I could get into the second one and on to the third one.. I love his characters. The little surprises that he keeps putting in really makes it the best. U definitely want to read this series.
Read more
One person found this helpful
Helpful
Comment Report abuse

Shirley B
5.0 out of 5 stars Stormwielder is Amazing!
Reviewed in the United States on April 28, 2017
Format: Kindle EditionVerified Purchase
Stormwielder is a great read. I had difficulty putting it away and am looking forward to reading book two. As a lover of fantasy novels, I liked the characters immensely. The characters are slowly developing and becoming a team. My favorite characters so far are Eric, Inken and Antonia. This author Aaron Hodges did a fantastic job with this book and I suspect book two will be just as awesome. This is his first novel. I swear you won't be disappointed.
Read more
One person found this helpful
Helpful
Comment Report abuse

Kindle Customer
5.0 out of 5 stars Interesting read
Reviewed in the United States on November 1, 2019
Format: Kindle EditionVerified Purchase
Excellent story line. I have always liked when an author added the gods in a story line. It usually adds a dimension to the authors stories..Will be looking forward to more.
Read more
One person found this helpful
Helpful
Comment Report abuse

Amazon Customer
1.0 out of 5 stars Ends badly, plot is simplistic and predictable. Authors writing is stilted.
Reviewed in the United States on March 20, 2019
Format: Kindle EditionVerified Purchase
I would recommend the author work on his prose. I also personally find it frustrating reading cliff hangers. Finish the story, then write another one. Suffice it to say I didn't like the story and when I skipped to the last chapter to see how it ended only to discover that it didn't I was prompted to write this critique.
Read more
One person found this helpful
Helpful
Comment Report abuse
See all reviews from the United States

Kindle Customer
1.0 out of 5 stars Very irritating
Reviewed in the United Kingdom on May 7, 2018
Format: Kindle EditionVerified Purchase
I found the constant repetition of the characters names very irritating: If my memory span was that short I wouldn’t be reading a book.
Read more
2 people found this helpful
Helpful
Sending feedback...
Thank you for your feedback.
Sorry, we failed to record your vote. Please try again
Report abuse

snowdrop36
5.0 out of 5 stars Gripping adventure
Reviewed in the United Kingdom on September 11, 2017
Format: Kindle EditionVerified Purchase
This book was exciting and a must read. It had everything, gods, magic and dragons. A battle between good and evil with mysterious strangers and unknown powers. I was enthralled by it and want to read more of the story.
Read more
Helpful
Sending feedback...
Thank you for your feedback.
Sorry, we failed to record your vote. Please try again
Report abuse

Kindle-Kunde
5.0 out of 5 stars Realy good entertainment
Reviewed in Germany on July 31, 2017
Format: Kindle EditionVerified Purchase
Well written, characters you get attached to easily. Interesting view on how magic works. Seen it before, but here with a twist of its own to it. The protagonists are introduced with their own story and you just want to know what happens next. You get some surprises and are well entertained. I liked it very much.
Read more
One person found this helpful
Helpful
Sending feedback...
Thank you for your feedback.
Sorry, we failed to record your vote. Please try again
Report abuse