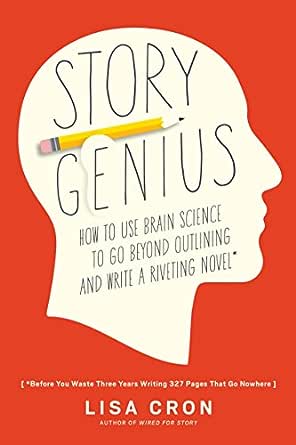 Story Genius: How to Use Brain Science to Go Beyond Outlining and Write a Riveting Novel (Before You Waste Three Years Writing 327 Pages That Go Nowhere) 1st Edition, Kindle Edition

Flip to back Flip to front
Audible Sample Playing... Paused   You are listening to a sample of the Audible narration for this Kindle book.
Learn more
ISBN-13: 978-1607748892
ISBN-10: 1607748894
Why is ISBN important?
ISBN
This bar-code number lets you verify that you're getting exactly the right version or edition of a book. The 13-digit and 10-digit formats both work.

"Using brain science, Cron busts the myths of good writing to help you find the real story behind all that plot and metaphor."
-- The Writer

"In [Cron's] new book, Story Genius, she picks up the. . . theme. . . that a protagonist’s internal struggle makes the story work, and offers step-by-step advice on how to exploit this truth about neuroscience for richer, deeper, better first drafts. . . .Cron provides exercises and examples to keep writers on track, always highlighting the fact that emotions engage the brain faster than anything else. . . .The concepts are easy to understand and they are certainly important. Even if you can’t go on a retreat, you should try to find time to do the exercises for your own blueprint."
-- PsychologyToday.com

"It’s a simple question: 'How do you write an effective, engaging story?' Ask Lisa Cron. An accomplished author and story coach, she has just published her second book, Story Genius. A manual of sorts, it teaches cognitive storytelling strategies and uses actual brain science to help make its readers into better writers."
-- Creative Screenwriting

"Cron, author of Wired for Story, proposes this new book as the answer to the question, What’s the biggest mistake writers make? She uses psychology and other sciences to explain what makes an utterly compelling story and how to write one. . . .Novice writers looking for a step-by-step guide to how to build—or fix—their novel might find a lot of useful information in here. . ."
-- Publishers Weekly

"Lost in the quagmire of trying to write a novel? Well, forget everything you've ever been told about story, because chances are, it's totally wrong. So where to turn? Story guru Cron not only gives you the skinny on why and how stories work (and why and how we respond to them), she also shows you how to craft a novel step by step, working with author Jenny Nash from the germ of an idea to a living, breathing story. I'd never consider writing a novel without Lisa's input, and neither should you."
-- Caroline Leavitt, New York Times best-selling author of Is This Tomorrow and Pictures of You

LISA CRON is the author of Wired for Story and Story Genius. Her TEDx talk, Wired for Story opened Furman University's 2014 TEDx Conference, Stories: The CommonThread of Our Humanity. Lisa has worked in publishing at W.W. Norton, as an agent at the Angela Rinaldi Literary Agency, as a producer on showsfor Showtime and Court TV, and as a story analyst for Warner Brothersand the William Morris Agency. Since 2006 she has been an instructor inthe UCLA Extension Writers' Program, and she is on the faculty of theSchool of Visual Arts MFA Program in Visual Narrative in New York City.She is a frequent presenter at writers conferences, universities andschools nationwide, and in her work as a story coach Lisa helpsnovelists, screenwriters and journalists wrangle the story they want totell onto the page. --This text refers to the paperback edition.

What’s the biggest mistake writers make? This is the question I’ve been asked most frequently over the years. The answer is easy: they don’t know what a story is. So even though they have a great idea, their prose is gorgeous, and there’s a lot of action, there’s no real story, and so no driving sense of urgency, which translates to: no readers.

The result? Countless writers end up heartbroken because no matter how hard they work, how many writing workshops they take, how many degrees they earn, they still can’t get an agent, can’t get a book deal, and if they decide to self-publish (in order to show those talent-blind publishing bigwigs a thing or two), they can’t get anyone other than their friends and family to buy their book. The statistics can be scary. In 2012, the New York Times reported that most self-published books sell fewer than 150 copies; surveys reveal that agents reject over 96 percent of the submissions they receive (personally, I’d put the number even higher). So it’s no surprise that writers end up disappointed, sad, and sometimes even a tad bitter. Worse, they’re convinced that their failure proves one thing only: they have no talent.

That’s when that internal voice we all have, the one that pretends to have our best interest at heart, moves in for the kill. Whatever made me think I could be a writer? I should give it up immediately and express my creativity some other way. Like—I don’t know—interpretive dance. Don’t! Not only because chances are you do have the talent, but seriously, the world has way too many interpretive dancers as it is.

Here’s the truth: not understanding how story really works is not your fault. It’s on a par with not knowing exactly how your body absorbs the nutrients in the food you eat. You know that it does, and if you took high school biology, you probably remember that it has something to do with cells and membranes and amino acids, but the how of it is invisible (thank heaven). The same is true of the effect that story—all stories—have on you, and even more surprising, why they have that effect.

This book is designed to help you crack the story code, and make what was invisible, visible—not to mention eminently doable. It will turn you into a Story Genius. It will show you, step by step, how to craft a blueprint for your story that will set you up for success from the get-go. It will also drastically cut down on rewriting time—and it’s the only thing that will. You’ll not only hook readers from the very first sentence, but your novel—or screenplay, play, or short story—will be deeper, richer, and more compelling than anything you’ve written before. How can I be sure? Because we’re not talking about some new flavor-of-the-month writing system conjured out of thin air. We’re talking brain science.

Humans are wired for story. We hunt for and respond to certain specific things in every story we hear, watch, or read—and they’re the exact same specific things, regardless of the genre. Why is this so? Because story is the language of the brain. We think in story. The brain evolved to use story as its go-to “decoder ring” for reality, and so we’re really expert at probing stories for specific meaning and specific info—and I mean all of us, beginning at birth. Even a kindergartner recognizes an effective story, because it’s built into the architecture of the brain. Story is how we make sense of the world around us; it’s a system that predates written language by eons. Heck, before spoken language, we grunted and signed in story. I’d wager that early in the morning, the cranky among us still do.

Because our response to story is hardwired, it’s not something we have to learn or even think about, which is why we are often unaware of the power story has over us. When a story grabs you, you’re in its sway, no questions asked. You may have heard the oft-expressed sentiment that getting lost in a good story demands a “willing suspension of disbelief.” In fact, this couldn’t be less true, because it implies we have a choice as to whether we fall under the spell of a captivating story. We don’t have a choice. The power story has over us is biological. But while responding to story is hardwired, creating a story is not. As the great Southern writer Flannery O’Connor once noted, “Most people know what a story is until they sit down to write one.”1 But here’s the part she missed: before we can learn to write a story, we have to know what a story actually is. That is, we have to know what’s really hooking and holding readers.

The problem is that most writers mistake story for the things we can see on the page: the stunning prose, the authoritative voice, the intense and exciting plot, the clever structure. It’s a very natural mistake, and a crippling one. Because while no one could deny that all those things are important, they lack the crucial element that gives a story meaning and brings it to life.

What drives a story forward is, at first blush, invisible. It’s not talent. It’s not voice. It’s not the plot. Think electricity. The same way even the most powerful lamp is useless unless it’s plugged in, a story can’t engage readers without the electricity that illuminates the plot, the voice, and the talent, bringing them to life.

The question is: what, specifically, generates that juice? --This text refers to the paperback edition.
Read more