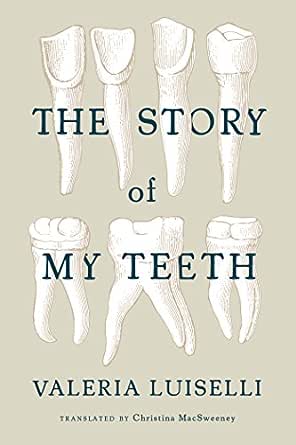 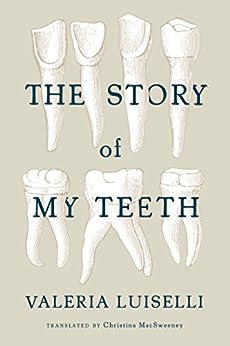 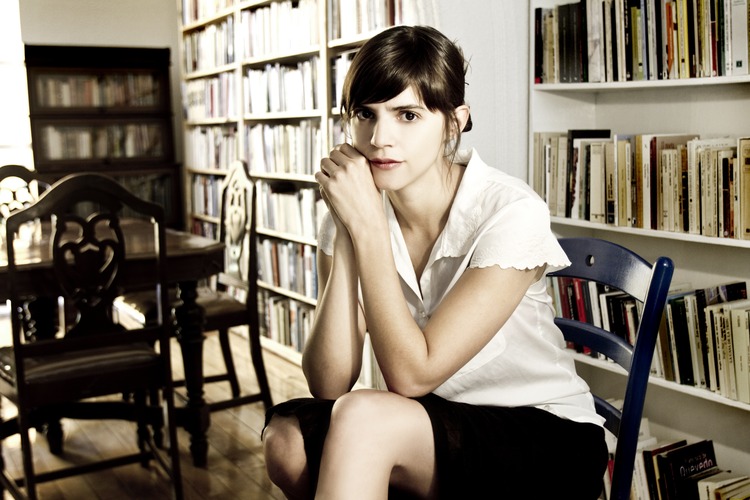 The Story of My Teeth Kindle Edition

The Story of My Teeth explores the meaning of home through the antics of an auctioneer, told in his own hyperbolic fashion, who has decided views on the meaning of value and worth in life and art.

The Story of My Teeth has a Joycean playfulness with words, events, structure, literary theory, languages, and human nature.

A beautiful and quick moving story on the scenic route...Luiselli makes some bold explorations into the art of value and storytelling, and it's something that shouldn't go quietly into the night. We need to reflect, we need to explore. Many books have come and gone that have tried to make sense of the power of fiction, and A Story of My Teeth may be the closest we'll get...It's a gallery of thought. It's meant to be appreciated part for part. This is writing illuminated.

A fiercely intelligent, inventive, and hilarious exploration of worth, value, and creation in the worlds of art and literature.

A lively, loopy experimental novel rich with musings on language, art, and, yes, teeth...The whole book is a kind of extended commentary on how possessions acquire value largely through the stories we tell about them....A clever philosophical novel that, as the author puts it, has 'less to do with lying than surpassing the truth.'

Quirky and charming, The Story of My Teeth is a delightful meditation on art, value, and truth.

Quirky doesn't begin to capture the wacky inventiveness of Valeria Luiselli's second novel. The Story of My Teeth is a playful, philosophical funhouse of a read that demonstrates that not only isn't experimental fiction dead, it needn't be deadly, either. Luiselli's elastic mind comfortably stretches to wrap itself around molars, Montaigne, fortune cookies and various theories of meaning.

Surprising and charming...It's difficult not to follow wherever it takes you.

The novel's experimental structure is full of literary allusions and bon mots from across the ages. Readers hungry for more from Luiselli will be happy with a clever variation on her style.

This kind of writing-direct and gentle, affectionate and satirical, precise and imaginative, memorable and efficient-appears throughout, and the character of Gustavo is brought to life with exquisite imaginative power and beautifully judged tics and cadences...It is a sad, beautiful, and brilliant book. It will endure.

-- "National (Abu Dhabi)" --This text refers to the audioCD edition.

Valeria Luiselli was born in Mexico City in 1983 and grew up in South Africa. In 2014 she was honored as part of the National Book Foundation's list of 5 under 35. Her debut novel, Faces in the Crowd, earned rave reviews and won the Los Angeles Times' 2015 Art Seidenbaum Award for First Fiction. Luiselli's fiction and essays have been translated into many languages, and her work has appeared in such publications as Granta, McSweeney's, and the New York Times

Christina MacSweeney has an MA in literary translation from the University of East Anglia. She has translated Valeria Luiselli's novel Faces in the Crowd and collection of essays, Sidewalks. She has also contributed to a wide variety of literary magazines and websites, including McSweeney's, Brick magazine, and Granta.

Armando Duran has appeared in films, television, and regional theaters throughout the West Coast. For the last decade he has been a member of the resident acting company at the Oregon Shakespeare Festival. In 2009 he was named by AudioFile as Best Voice in Biography and History for his narration of Che Guevara. A native Californian, he divides his time between Los Angeles and Ashland, Oregon.

4.0 out of 5 stars
4 out of 5
137 global ratings
How are ratings calculated?
To calculate the overall star rating and percentage breakdown by star, we don’t use a simple average. Instead, our system considers things like how recent a review is and if the reviewer bought the item on Amazon. It also analyzes reviews to verify trustworthiness.
Top reviews

Susan Day
4.0 out of 5 stars An “Out-Of-The-Box” Read
Reviewed in the United States on June 19, 2019
Verified Purchase
I have read four of Valera Luiselle’s books, beginning with her newest book first. This was my fourth read and was written when she was still in Mexico. There is much I believe I missed is this book, partly because I didn’t know the people she referenced and partly because I couldn’t follow (relate to) the structure she chose to use to write the story. Nonetheless, I applaud the effort she went to to create a story that both entertained and challenged the reader. A great book for graduate-level book study. It has left me thinking about it long after the book is finished. It was originally produced and distributed in “books” for employees of a/the juice factory that is a background feature of the story. Imagine Marilyn Monroe’s teeth!
Read more
Helpful
Report abuse

Aspasaia
3.0 out of 5 stars If you like the shock factor...
Reviewed in the United States on October 3, 2019
Verified Purchase
I know that this novel is widely acclaimed and brilliant by many measures. At the same time, I had trouble finishing it. I have an aversion to novels that seem to propelled more by an interest in shocking the reader than in the art of storytelling. I also found the main character so very unsympathetic. A recent novel that I absolutely love and find tremendously brilliant is The Parisian by Isabella Hammad. If you're looking for a brilliant young author, read The Parisian!
Read more
One person found this helpful
Helpful
Report abuse

SArmst2547
5.0 out of 5 stars Funny, amusing, definitely worth it...
Reviewed in the United States on May 31, 2019
Verified Purchase
As I was reading this book, I was thinking of the really funny sections of Don Quixote, the ironic undertones, the humor and humanity of the narrator, the many windmills of our lives. I was also reminded of the "magical realism" school, but I thought this was more amusing and pointed and down-to-earth. I thought this was a really cool book. Go for it!
Read more
Helpful
Report abuse

Mario Waissbluth
5.0 out of 5 stars Do not miss it
Reviewed in the United States on September 20, 2015
Verified Purchase
This novel is simply delusional, in the most wonderful sense of the word. Short, I could not stop reading it from beginning to end.
It is the "march of folly" that we human beings live, travelling daily from our own misery to our greatness and back. This story, happening in my beautiful and beloved Mexico, is deeply universal, providing easy access - to lay readers such as me - to some of the best writers of all time.
It is also, in itself, a megainnovation in its genre, by building a participatory story with factory workers.
It is both a sad novel, and a humorous story, well written and perversely ironic, about the greatness and weaknesses of us all. I read it with a smile in my mouth, swallowing a playful sarcasm or a surprise every few lines.
Read more
37 people found this helpful
Helpful
Report abuse

Kindle Customer
4.0 out of 5 stars Allegorical novel
Reviewed in the United States on November 27, 2018
Verified Purchase
An allegorical story, not for the engineer, but more for the poet, although I am closer to the engineer than the poet, I really enjoyed the read.
Read more
2 people found this helpful
Helpful
Report abuse

sns1102
4.0 out of 5 stars Sad and comical all at the same time.
Reviewed in the United States on October 10, 2016
Verified Purchase
Reminded me of a Confederacy of Dunces. Brilliant character development from the unreliable narrator who is a little more reliable than you think.
Read more
3 people found this helpful
Helpful
Report abuse

Pamela I. Perkins
3.0 out of 5 stars Strange Book in Every Way - That is not Necessarily a Criticism
Reviewed in the United States on April 26, 2019
Verified Purchase
The title intrigued me, and then I wondered what it was all about. I stuck with it until I was familiar with the author’s style and actually enjoyed the journey.
Read more
Helpful
Report abuse

Amazon Customer
4.0 out of 5 stars A book club selection....
Reviewed in the United States on October 2, 2016
Verified Purchase
Unusual but thoughtful. So different from popular fiction. Perhaps more of a writer's read. Our book club is "trying" to understand more about Contemporary Mexican culture by reading current fiction written by Mexican writers. Book seems more of a literary tour de force and a musing on meaning and value in art and literature than exposing or reflecting on Mexican culture.
Read more
6 people found this helpful
Helpful
Report abuse
See all reviews

Nyström Per
3.0 out of 5 stars Losing momentum
Reviewed in the United Kingdom on April 11, 2018
Verified Purchase
Splendid idea, which did not las through the whole book.
Read more
One person found this helpful
Report abuse

arturo
5.0 out of 5 stars A funny story that also makes you think about fiction
Reviewed in Mexico on April 17, 2018
Verified Purchase
I read this book for a book club and would not normally have done so, especially because of some really off putting reviews out there. Mostly and firstly I enjoyed its really good story telling and strange anti-hero. It is also though an experimental book that was created in an organic and collaborative way that explicitly and implicitly questions the value of material objects, words and stories.

I also like the way it portrays Mexico. Comedic but not condescending.
Read more
Report abuse
Translate review to English

Edward
1.0 out of 5 stars NOT a Pleasant Experience
Reviewed in Canada on November 20, 2016
Verified Purchase
I know that most of the reviews were really good. I found it an extremely difficult read and finally put the book down after gnashing my teeth through nearly 100 pages. Just not my cuppa!
Read more
Report abuse

Jorge S
5.0 out of 5 stars Great
Reviewed in Mexico on May 1, 2017
Verified Purchase
This novel is beautifully written. The author is one of the most important writers in México right now. Her style is unique and clearly noticeable since the first Pages.
Read more
Report abuse
See all reviews