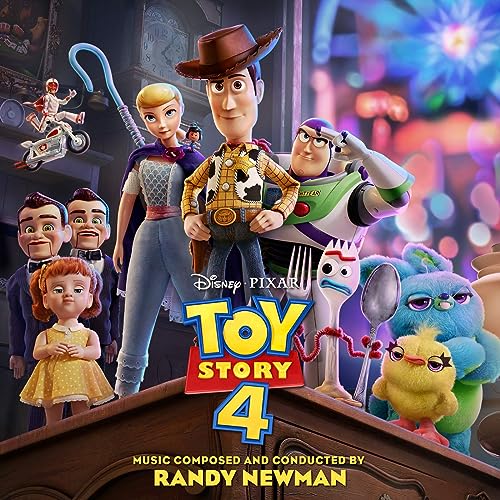 4.6 out of 5 stars
4.6 out of 5
118 global ratings
How are ratings calculated?
To calculate the overall star rating and percentage breakdown by star, we don’t use a simple average. Instead, our system considers things like how recent a review is and if the reviewer bought the item on Amazon. It also analyzes reviews to verify trustworthiness.
Top reviews

Jay's Reviews
5.0 out of 5 stars Every Great Franchise Has One More Great Soundtrack
Reviewed in the United States on June 27, 2019
Verified Purchase
Just like Woody and the rest of the gang it seems I have gone down a similar path when going back and listening to the original toy story soundtrack that was released in 1995 that was a long long time ago so like Andy I've grown up too only to find that nothing has changed I was then as I am now still very found of all these wonderful characters that i grew to love over the years .

Here we are again riding the saddle into a new adventure and with our trusted composer Randy Newman who has long been a part of the franchise since the beginning and what a treat it is to have him produce the score for the fourth installment toy story 4 and as I'm listening to these soundtracks what i love about them is the childlike quality they all seem to have and toy story 4 is no different in fact Randy Newman doesn't just give us the classic song you got a friend in me but he also gives us two brand new songs titled the ballad of the lonesome cowboy sang by Chris Stapleton which if I weren't already a fan I would have already known what Woody was all about what a great song.

As if that weren't enough to please your audible taste buds Randy Newman also provides with some of the older themes all from the first three films some composers get a lot negative feedback for doing this often complaining about a lot of the music sounds like a rehash of sorts stemming from the movies before them but I love it simply because it doesn't sound used or old but when you already have established characters such as Woody Or Buzz whenever you hear their themes in todays day and age the nostalgia factor hits all kinds of sweet spots a nostalgia trip all the way back to the golden age and Randy hits the ball right out of the park with this one 26 tracks of brand new material guest spot featuring established themes for the new and old characters alike an hour 14 minutes of music thats pretty awesome I haven't gotten through the entire tracklist but here are the few of my favorites so far.

Alison
5.0 out of 5 stars Powerful Forky song lyrics
Reviewed in the United States on September 9, 2019
Verified Purchase
Love the Forky song- strong for anyone who has dealt with a loved one with potential suicide.
Read more
One person found this helpful
Helpful
Report abuse

Sassy Momi
4.0 out of 5 stars Kids Like it...
Reviewed in the United States on September 23, 2019
Verified Purchase
But not as much as other soundtracks.
Read more
Helpful
Report abuse

Jean Klug
5.0 out of 5 stars This cd is perfect
Reviewed in the United States on September 10, 2019
Verified Purchase
The Toy Story 4 CD is perfect. It was given as a gift.
Read more
Helpful
Report abuse
See all reviews

Flamingo Lady
5.0 out of 5 stars My son loves it
Reviewed in the United Kingdom on August 2, 2019
Verified Purchase
Toy story soundtrack, is as stated
Read more
Report abuse