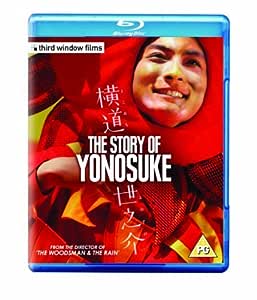 United Kingdom released, Blu-Ray/Region A/B/C : it WILL NOT play on regular DVD player. You need Blu-Ray DVD player to view this Blu-Ray DVD: LANGUAGES: Japanese ( Dolby Digital 5.1 ), Japanese ( DTS-HD Master Audio ), English ( Subtitles ), ANAMORPHIC WIDESCREEN (1.78:1), SPECIAL FEATURES: Anamorphic Widescreen, Interactive Menu, Scene Access, SYNOPSIS: The Story Of Yonosuke is OKITA Shuichi's follow up to The Woodsman And The Rain is one of the biggest hits this year at International film festivals; its touching characters and story make it easy to understand why. Yonosuke takes pleasure in life's simplest things and his positivity touches and alters everyone around him, from his college friends to his work colleagues in later life. Through the recounting of the friends experiences of Yonosuke, we start to build-up his story, his character, piecing everything together about him and where he is today. Without a doubt a 'dream-team' of creative talent in director OKITA Shuichi, author YOSHIDA Shuichi (Villain), screen-writer MAEDA Shiro (Isn't Anyone Alive?) and rising star KORA Kengo (Fish Story), coming together to make a film which you'll love more and more with each watch. ...A Story of Yonosuke (2013) ( Yokomichi Yonosuke )

Los Angeles Pete
5.0 out of 5 stars Five Stars
Reviewed in the United States on May 23, 2016
Verified Purchase
If you were in Japan in the eighties, this film will really move you. Perfectly captures the time.
Read more
One person found this helpful
Helpful
Comment Report abuse

Tommy Dooley
4.0 out of 5 stars Lyrically paced Japanese Tale
Reviewed in the United States on April 22, 2014
This is the follow up to `The Woodsman and the rain' and has been seen as a bit on the autobiographic side coming from the book by Shirô Maeda. We meet Yonosuke Yokomichi - which is a funny alliteration in Japan. He is starting University in Tokyo hailing as he does from the more provincial Nagasaki. He meets some people and takes up samba dancing.

As well as making friends he does odd jobs and a rich girl falls for him and he has a depressed uncle. This is set in 1987 and the film often skips ahead to 2003 where he is discussed by the various people whose lives he has touched. He seems to be one of those people that always see the positive in life and whilst he can come across as impossibly naive at times he is also well grounded in some aspects of human interaction. This is also a sort of comedy and I did have a few laughs but a lot is cultural so an understanding of Japanese culture will be a massive benefit.

The thing is though this is nearly three hours long and for a story that, of necessity, meanders a fair bit it is hard to stay focussed. I kept thinking the loose ends would come together and they do - on occasion but I did feel a lot was padding. The start especially has some very long scenes with minimum momentum which will be an issue for some viewers, but it is worth bearing with. Do not expect any action either of any sort. This is a slow, coming of age story and the only moral that I could see was that we should always value our friends - especially those that we might think are a bit different as they may the most precious.
Read more
One person found this helpful
Helpful
Comment Report abuse
See all reviews

KinoundKochen
5.0 out of 5 stars Brilliant film on a great Blu-ray
Reviewed in the United Kingdom on May 13, 2014
Verified Purchase
I was so lucky to see this film at a festival and ever since I had been looking out for a Blu-ray release. As soon as Third Window Films had announced this title I preordered it. Once again, their release does not disappoint. It's a great movie to revisit once in a while, especially on one of those rainy days where you need something to brighten your day. 5 Stars easily.
Read more
4 people found this helpful
Report abuse

Mr. J. Eley
5.0 out of 5 stars Wonderful
Reviewed in the United Kingdom on October 16, 2015
Verified Purchase
An understated Third Window gem! It gets under your skin.
Read more
One person found this helpful
Report abuse

Kevin Connolly
1.0 out of 5 stars One Star
Reviewed in the United Kingdom on January 5, 2016
Verified Purchase
Blue Ray stops half way through
Read more
Report abuse
See all reviews