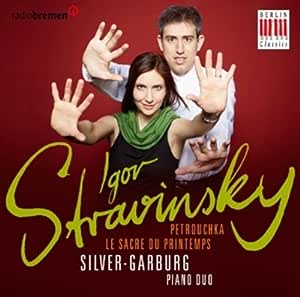 Sivan Silver and her partner Gil Garburg set new standards in the high art, often too little appreciated, of the duo on one or two pianos: acclaimed by audiences and critics alike, they are the constantly returning guests of top orchestras, festivals and concert organizers. Press reviews acclaim the Israeli artists for their consummate technical mastery, highly versatile and nuanced playing and exceptional sensitivity. Silver and Garburg capture the playful character of the piano writing, the interplay of impulse and intensity. Nor is this superficial showmanship or mechanical interaction; rather it is an organic and natural blending of the voices and a profound understanding of the work that determines the performance of the two exponents. With their new recording of two highly virtuosic works by Igor Stravinsky, Le sacre du printemps and Petrushka, the two artists have met a formidable challenge. Stravinsky, who arranged this ballet music both for orchestra and for four hands, makes great demands of his pianists. In particular, their interpretation must always stand comparison with the orchestral version. Nor is that all. Stravinskys works make the utmost demands of the instrument and of the artist: rich in contrast and colour, rhythmically vivid and complex, his music demands power and highly nuanced playing concentrated into a small area. This is a task that the pianist pair tackle with remarkable mastery. They unlock from the piano the timbres of an orchestra and the rhythms of a percussion kit and do it in a way that creates the impression only one person is playing. Silver-Garburg were well on the way to promising solo careers when they paired up first privately and then at the piano. They relish the constant contrast between recitals as a duo and orchestral concerts, between intimate pieces that call upon them as a unity, works conceived as dialogue, and those in which they sit at two pianos and summon up the massed power of a full orchestra. Its easy for a piano duo to create effects with sheer virtuosity. But we find that far too little. We want the listeners to be touched by our music to the depths of their heart.

3.7 out of 5 stars
3.7 out of 5
5 global ratings
How are ratings calculated?
To calculate the overall star rating and percentage breakdown by star, we don’t use a simple average. Instead, our system considers things like how recent a review is and if the reviewer bought the item on Amazon. It also analyzes reviews to verify trustworthiness.
Top reviews

Laszlo
5.0 out of 5 stars An extraodinary Piano Duo successfully tackles the intricacies of Stravinsky's music
Reviewed in the United States on February 23, 2018
If you are a music collector who enjoys music discovery through the technique and musicianship of performers, it becomes rather frustrating when someone's review is ONE line, and then, the only thing they can leave behind is a fully personal view of how the CD 'made them feel'. Not only harmless but highly irrelevant when it pertains "taste". But stars count, and at the end, such egocentric views hurt impressions unfairly when the first thing you see is Amazon's star count. I mean, if it is not your "cup of tea", then why review it at all?
I find that, currently, the three average stars for this item does not do it justice. Thus, I hope potential buyers navigate these so-called "reviews" and take whatever reads relevant AND helpful for them to make a purchasing decision. Isn't that, after all, the purpose of reviews?
This release contains 68 minutes of music for piano duet (i.e., one piano, four hands) of some of the most relevant and exciting music of the first part of 20th century. Several piano duos have embarked in recording these; and for a good reason. First of all, you cannot start your journey from the orchestral version, you have to put that aside and take this rendition at face value. The orchestral version will always "win" thanks to Stravinsky's fertile imagination for color and orchestration. Nonetheless, a piano duet makes you hear and discover things you would not in the orchestral version. Now that seems to be the point, isn't it? So now you have to consider this a complement to whatever is your favorite orchestral version of these pieces not to be compared with anything else but other versions of the same genre.
The Silver-Garburg Piano Duo has been playing together since they were teenagers in Israel. Now they are a loving couple living in Berlin. All their releases (I have three so far) are truly special. The first time I heard them (playing Mendelssohn) I could not believe my ears. Their level of synchronicity and playing 'as one' is unmatched; their technique outstanding, and their sensibility nonpareil. Need I say more? I would buy this and anything they play further and before.
[PS: This refers to the CD edition, of course. For some reason Amazon defaults into Vinyl.]

OM
4.0 out of 5 stars Excellent new recording; Recommended primarily for dorks
Reviewed in the United States on September 14, 2015
While I enjoyed this recording a great deal, I can only truly recommend it to a certain audience. This is not at all the fault of the performers; Silver-Garburg present a fresh and clean performance of both pieces.

After a lifetime of hearing orchestral versions of these pieces, a duo piano performance might be somewhat of a let-down for many listeners. Silver-Garburg trade in large orchestras for twenty fingers and lose Stravinsky's imaginative orchestration in the process.

While this might be a deal-breaker for many, true dorks should celebrate. In the absence of the orchestrations we all know and love, listeners can focus more easily on the many other aspects of the compositions that make them masterworks. Additionally, the piano reduction offers listeners a window into how most people would have initially experienced the music. (This is particularly the case with the Rite of Spring, which was published in this form immediately after the premiere, but only published in orchestral form nine years later.)
Read more
2 people found this helpful
Helpful
Comment Report abuse

GREENHORNET
2.0 out of 5 stars Two Stars
Reviewed in the United States on December 2, 2015
Verified Purchase
boring not my cup of tea
Read more
Helpful
Comment Report abuse
See all reviews

Geee!
4.0 out of 5 stars I do really enjoy the sparse Rite as well
Reviewed in Canada on December 5, 2015
Verified Purchase
To reduce a work as huge as Le sacre du printemps to two pianos is very interesting. However, it is Petrouschka which succeeds most in this two record set. I believe because the puppet ballet is more melodic, it stays more true to the original. However, I do really enjoy the sparse Rite as well. The sound is quite solid; a flat pressing with very little surface noise. My 1st copy had an off-center press on record one, but it was replaced in a few days. Lovely gatefold jacket, but it lacks information on the piano transcriptions which I would find interesting. The digital recording is not sharp or digitally sterile, but unfortunately the pianos are also lacking resonance. All in all, a fine addition to anyone's vinyl Stravinsky collection.
Read more
Report abuse