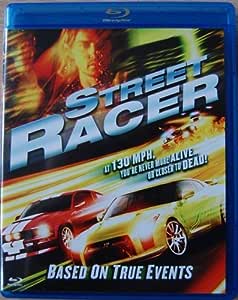 Share
STREAM ANYTIME with Prime Video from $4.99
Have one to sell?
Sell on Amazon

Netherlands released, Blu-Ray/Region A/B/C : it WILL NOT play on regular DVD player. You need Blu-Ray DVD player to view this Blu-Ray DVD: LANGUAGES: English ( Dolby Digital 5.1 ), English ( Dolby Digital Stereo ), Dutch ( Subtitles ), WIDESCREEN (1.78:1), SPECIAL FEATURES: Interactive Menu, Making Of, Scene Access, SYNOPSIS: Johnny Wayne (Clint Browning) is an ex-racer who is serving in prison after crippling a young boy during an illegal street race in Los Angeles. Wayne, having been traumatised by the events, vows to never race again, and is soon released as a reformed citizen. Whilst Wayne attempts to restore his life and become an honest, hardworking member of society, he slowly finds himself being lured back into street racing by his former associates, for the chance to keep his title as the ultimate street racer of Los Angeles. ...Street Racer

3.7 out of 5 stars
3.7 out of 5
22 global ratings
How are ratings calculated?
To calculate the overall star rating and percentage breakdown by star, we don’t use a simple average. Instead, our system considers things like how recent a review is and if the reviewer bought the item on Amazon. It also analyzes reviews to verify trustworthiness.
Top reviews

380 megaXtreme
2.0 out of 5 stars sucks
Reviewed in the United States on January 26, 2019
Verified Purchase
For a "the asylum" film, i guess you could say it's excellent cause most"the asylum" movies don't just suck they suck to the mega extreme. This is one boring movie though, i mean the star of this movie just doesn't come off as that great of actor, you kind of get the feeling he's thinking " i'm not sure i should be doing this", the whole time you're watching him, i don't know it just felt like you're standing behind the crew watching someone saying memorized script lines the way J-lo does and other bad actors do. This guy wasn't as bad as J-lo or chris pratt but hopefully his next movie will be better acting than this, he just acted so bored and the movie was so boring
Read more
Helpful
Comment Report abuse

DANN
2.0 out of 5 stars Awful! So glad I didn't get the Blu Ray
Reviewed in the United States on January 16, 2018
Verified Purchase
I'm very tolerable of car racing movies, because well if you've got hott carz and some eye candy, who really needs a story?! Unfortunately, the Asylum went the opposite way with this film: no eye candy or hott carz (except for the customized WRX & the GTR which you only see about 5 minutes of in the final race), and a pathetic excuse of a cliché storyline. And this isn't one of those good/bad Asylum films where they spoof and make fun of themselves. This was an apparent attempt to make an actual race movie.

Acting from the lead actor was actually quite good for a B-movie (which is why I'm giving 2-stars instead of one) but everyone else was pretty wooden and/or awful. Best movie line: "I don't race ricers" said to the main character while he's driving a completely stock BMW. Maybe in the original script he was supposed to be in a Civic w/a hideous body kit and lime green paint? Who knowz!

Jason
2.0 out of 5 stars It's pretty bad....
Reviewed in the United States on August 14, 2019
Verified Purchase
Most of the people in this kind of show they don't know anything about cars. They pull an Bug eye wrx from the junk yard and it turns into an 06-08 ESX Sti....

Most of the cars are stock, and even at that a mazda 3 vs a s2000? Not really competitive race at all, or a scion xb vs a s2000? It was low budget and it shows.
Read more
Helpful
Comment Report abuse

A normal person
2.0 out of 5 stars its really bad but entertaining
Reviewed in the United States on May 28, 2020
Verified Purchase
well it is a low budget terrible movie. However, it was entertaining while I was relaxing after work. The acting is straight out of a high school play but it is what it is.
Read more
Helpful
Comment Report abuse

S.J.R.
5.0 out of 5 stars too fast for me
Reviewed in the United States on October 20, 2019
Verified Purchase
what a great movie almost like the real deal but with more action made me feel like i was in the car racing lololololol
Read more
Helpful
Comment Report abuse