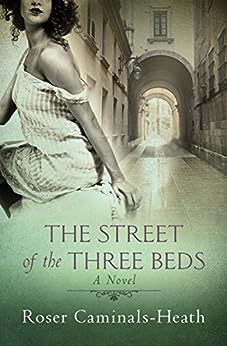 The Street of the Three Beds Kindle Edition

“An excellent, gripping narrative . . . constantly awakening curiosity, frequently surprising, and, at times, moving.” —El Temps
“A dark tale told with dazzling mastery.” —Ana Maria Moix, author of Dangerous Virtues
“Caminals’ books have all the essentials to become modern classics.” —La Vanguardia
“The perfect structure of a classic novel, Roser Caminals is a master of the craft of writing. . . . [A]bsolutely brilliant . . . flows like clear water.” — L’Eco de Sitges
“After so many attempts and so many experimentations that don’t seem to lead us anywhere, Caminals possesses the great virtue of taking us to where there is the indestructible truth of good novels.”—Presència

Roser Caminals-Heath (b. 1956), a Barcelona native, is a literary translator and prize-winning novelist. Caminals-Heath earned her master’s and doctoral degrees at the University of Barcelona. She won an award from the Spanish embassy for her English translation of Emilia Pardo Bazan’s The House of Ulloa, and her own work has been published in three languages. In 1996, her novel Les herbes secretes (The secret herbs) won first prize in the Jocs Florals de la Diàspora contest, for expatriate authors writing in Catalan. She has also published a nonfiction book, La seducció americana (The American seduction), which draws on her experiences in the United States, where she has lived since 1981. The Street of the Three Beds is the first in a trilogy that depicts Barcelona at the turn of the twentieth century. Caminals-Heath is a professor of Spanish at Hood College in Frederick, Maryland, and is married to author William Heath.

Maria Barrera-oro
5.0 out of 5 stars Old time Barcelona
Reviewed in the United States on November 9, 2017
Verified Purchase
This is the most interesting story with a old Barcelona background and with a superb writing
Read more
Helpful
Report abuse

julie whiteley
4.0 out of 5 stars A Compelling Read
Reviewed in the United States on March 7, 2013
My rating: 4 of 5 stars
This edition of The Street of Three Beds was published in 2012 by Open Road Integrated Media and written by Roser Caminals. The book was written originally in the author's native language of Catalan. The novel is set in the period of 1880's to the 1920's in Barcelona. Maurici comes from a well off family the owns and operates a factory. Maurici's father is a no nonsense - all business type man, but his mother is more indulgent and wants her son to be well educated and happy. So, Marici is somewhat carefree and a bit spoiled. He parties with his friends and has little use for ambition and doesn't think a great deal about his future. He has an affair with a seamtress, Rita. She informs him that she thinks she might be pregnant. His immediate feeling are that she is trying to trap him and he's having none of it. When she enters a shop to pick up some garments, she never comes back out. The shop owner claims she never saw the girl. This event changes Maurici's life in ways he could never have imagined. He becomes obsessed with finding out what happened to Rita. This leads him to what on the surface looks like a bordello, but in reality is a front for white slavery. Rita somehow wound up in this place. The horror he witnesses changes Maurici's outlook on life. The first part of the book moves a little slow. You will no doubt find yourself unimpressed with Maurici and his attitude. But, the pace picks up after a bit and the mystery of what really happened to Rita is revealed and shocking revelations come to light that involve Maurici's own family.This book does have a tidy ending, but there is still an element of sadness that those involved in these events are still haunted with. The author does a great job of placing us in Barcelona in this era. A compelling story worth checking out. Over all a B+. Thanks to Open Road Media and Netgalley for a copy of this book.

Viviane CrystalTop Contributor: Historical Fiction Books
3.0 out of 5 stars Power and Lust Prevail Again!
Reviewed in the United States on September 29, 2012
Maurici Aldabo is a playboy in the beginning of this novel. His father is a manufacturer who hopes his son will eventually take over the business. While Maurici does have talent in dealing with their European counterparts in business, he does only what he has to do and spends the rest of his time drinking and carousing with his friends and any ladies he can seduce. The novel opens with his current dalliance, Rita, announcing that she is pregnant and the reader will be stunned by Maurici's callous yet nervous initial reaction. What a chump!

However, the situation becomes complex with Rita's disappearance and the pages that follow concern Maurici's transformation into a concerned, investigative, upstanding young man. For this disappearance has shattered Maurici's safe cocoon world, and the results are dangerous but endearing as well as adventuresome.

Maurici enters what he thinks is a world of prostitutes that perhaps Rita, a seamstress by trade, was secretly engaged in. As if that weren't bad enough, it turns out that there is something far more sinister happening involving the lives of young woman who are being caught or trapped into a white slave trade business, overseen by the highest officials involved in government and business. Shocking? Not really yet the author deftly alerts the reader through each phase of discovery as to how shocking this is to the average citizen, represented obviously in Maurici Aldabo and perhaps those known all too well to him.

This was a good read with an okay ending. Although there is much about the gothic style underworld of this story, the story could have just as well taken place in any other large city in any country.
Read more
2 people found this helpful
Helpful
Report abuse

Lola
5.0 out of 5 stars The Mystery of Good Writing
Reviewed in the United States on June 3, 2013
The Street of the Three Beds has been the great find of this year. I hadn't heard of this author from Barcelona, Spain, until a friend recommended this book. In it, Caminals proves that a mystery can be well written and offer something more than a twisted plot. She delivers a finely textured, authoritative picture of her native city at the turn of the twentieth century, populating it with a memorable set of characters, from the powerful industrial bourgeoisie to the prostitutes in the red-light district. Read it.
Read more
2 people found this helpful
Helpful
Report abuse

By Alice Hoffman
5.0 out of 5 stars The street of the three beds
Reviewed in the United States on March 22, 2014
What a good book. Great story well written. Plenty to keep you intrigued. A wonderful story, really enjoyed it. I hope you do for
Read more
Helpful
Report abuse

E. Lines
5.0 out of 5 stars Interesting mystery
Reviewed in the United States on September 19, 2012
Very interesting story with good character development. A fascinating glimpse into another side of life in the history of Barcelona.
Read more
One person found this helpful
Helpful
Report abuse
See all reviews
Back to top
Get to Know Us
Make Money with Us
Amazon Payment Products
Let Us Help You
EnglishChoose a language for shopping. United StatesChoose a country/region for shopping.
© 1996-2021, Amazon.com, Inc. or its affiliates