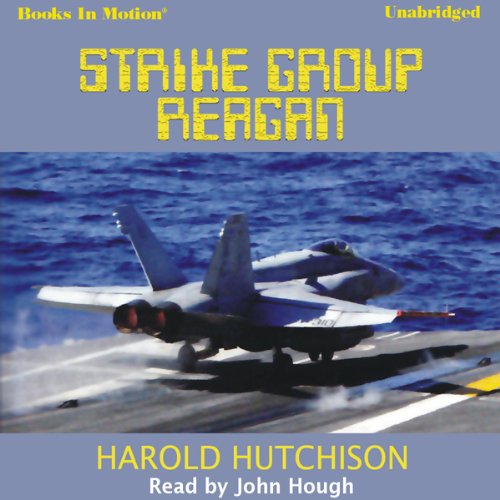 List Price: $24.49
You Save: $8.54 (35%)
By completing your purchase, you agree to Audible’s Conditions Of Use
Sold and delivered by Audible, an Amazon company
Share

2.5 out of 5 stars
2.5 out of 5
3 global ratings
How are ratings calculated?
To calculate the overall star rating and percentage breakdown by star, we don’t use a simple average. Instead, our system considers things like how recent a review is and if the reviewer bought the item on Amazon. It also analyzes reviews to verify trustworthiness.
Top reviews

E. Geddes
4.0 out of 5 stars Clancy-esque pro-military action novel
Reviewed in the United States on January 14, 2010
In the interests of full disclosure, let it be noted that the author is my older brother. That being said, I really did try to write an honest review of the book - but be forewarned that I may be biased. :)

Not bad at all for a first novel. Strike Group Reagan is a Clancy-esque military action novel, complete with lots (and lots and lots) of military and government lingo and abbreviations from several countries and cultures. Mr. Hutchison has obviously put forth a great deal of effort to learn about the various weapons, munitions, equipment, aircraft, ships, and other vehicles he uses in his novel. The detail is mind-boggling (and I have to admit to skipping over a paragraph or two that left my head swimming with letters and numbers). He clearly knows his stuff on the topic and has done extensive research to ensure accuracy. Mr. Hutchison also balances the perspectives well, following Tom Clancy's style here closely, juggling the storylines to keep the action moving without leaving us wondering about any of the characters too long. I would have like the students' storyline fleshed out a little more, but I really liked the relationship that he wrote between Angela (the student sister) and Renee (the fighter pilot sister).

I especially appreciated his inclusion of historical references - the novel's events were compared to battles in World War II, Vietnam, Korea, and the Iraq War. I felt like I was getting an education in war tactics while being entertained by the action. Lots of pop culture references helped to ground the novel in the present as well and provided some relief from the heavy technical side of the story.

My few complaints about the book include the occasional abbreviation or jargon that was not explained (but for his target audience perhaps they don't need to be), a non sequitur here or there that didn't seem to add to the story (but could arguably help flesh out the characters), and some really obvious proofing errors and inconsistencies (more his publisher's fault than his).
Read more
12 people found this helpful
Helpful
Report abuse
See all reviews

Nick
4.0 out of 5 stars Good techno rollercoaster !
Reviewed in the United Kingdom on May 19, 2011
Verified Purchase
Ok just a quick review of Strike Group Reagan. If you enjoyed Red Storm Rising, Vortex or similar you're going to like this.

I found it very difficult to put down once started and for a first novel it's a very good start.

Now the not so good.

The book is not very well written. I'm not talking about the story which is good or the technical aspects which are spot on.

The English is not very good. What I mean by this is the construction of the sentences and the placement of commas etc. Sometimes their maybe a poor use of a word or a sentence may just be hard work to read because of the way it's written.

If the Author had perhaps spent a little more time with proof reading and perhaps had a little help with the way the book was written I think it would have made the story even more pleasurable.

Overall though dont let this stop you from buying what is still a great read !

I'm looking forward to the next book !
Read more
One person found this helpful
Report abuse

Jeff N.B
1.0 out of 5 stars Only for the Geeks
Reviewed in the United Kingdom on April 20, 2012
Verified Purchase
Strike Group Reagan is one of the hardest books to review I have come across because it has a plausible storey line although somewhat overtaken by last years "Arab spring". An American aircraft carrier battle-group is sent to rescue civilians trapped in Tunisia by a popular uprising and an invasion which has overt support of China. So far so good.

Told well this book could have been a good read but alas author Harold Hutchison fails to live up to the plot he devised. He first tries to impress by long discussions about small arms ammunition and the amount of propellant that is best. He then goes on to quote all sorts of military jargon for the most part without giving the reader any explanation of what it means. He compounds this by giving the full military designation of just about every piece of equipment used. I'm not really interested that an aircraft is going to drop AGM-154A Stand Off Attack Weapons with 97 BLU-97 bomblets or that a medium range air to air missile is in fact an AIM-120C AMRAAM etc etc. No doubt Mr Hutchison's colleagues at Soldier of Fortune magazine where he is a Consulting Senior Editor think this is great stuff but alas this obsession with detail is at first distracting, then tedious and finally annoying.

Finally in the second half of the book Hutchison becomes a spokesman for the tobacco industry with the description of a cigarette being lit on just about every other page, along with details of the manufacturer and the brand.

In truth there is just a faint hint of a good author here but this book is immature and juvenile and will appeal to very few. One star only because I can't give a half star.
Read more
Report abuse
See all reviews
Back to top
Get to Know Us
Make Money with Us
Amazon Payment Products
Let Us Help You
EnglishChoose a language for shopping. United StatesChoose a country/region for shopping.
© 1996-2021, Amazon.com, Inc. or its affiliates