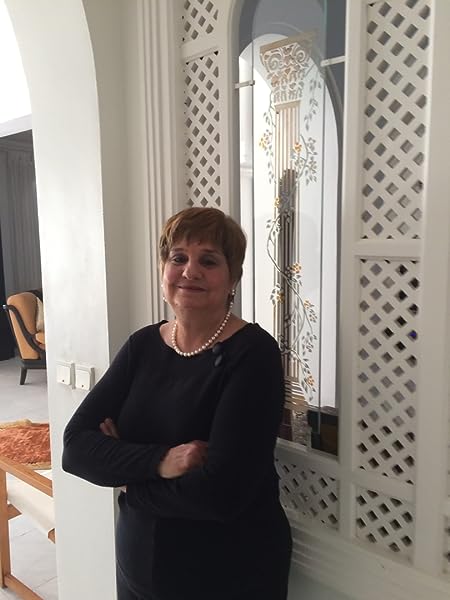 by Eileen Colucci (Author)
4.5 out of 5 stars 10 ratings
See all formats and editions
Sorry, there was a problem loading this page. Try again.

Growing up Catholic together on Long Island, NY, shy, free-spirited Lorraine DeVico and outgoing, traditionalist Suzanne Tierney are inseparable. Their friendship endures Lorraine's crisis of faith at sixteen and the divisive Vietnam years. But, in college they choose different paths. Lorraine travels to France where she meets Larbi El Maghrebi, a charming Moroccan student with whom she falls deeply in love. Embarking on an odyssey of faith and love, she follows Larbi to his Moslem country to make her home in his world. Hit with a "double whammy" on arrival, she must adjust once again to life in a strange land as well as to life as part of a "mixed couple." Years later, when tragedy strikes, it is Suzanne who takes up the journey, traveling to her friend's adopted home for the first time. She arrives though with a hidden agenda - she wants to take Lorraine's child back home with her.

With all the talk nowadays of a "clash of civilizations," THE STRINGS OF THE LUTE takes a look at "the little picture:" ordinary people, of totally different backgrounds, cultures and religions, dealing with some of the extraordinary issues of our time.
Read more
Previous page
Next page

A native New Yorker, Eileen Colucci has been living in Rabat with her Moroccan husband for the past thirty-plus years. She is a former teacher and recently retired after twenty-eight years as a translator with the U.S. Embassy, Rabat. Her articles and short stories have appeared in various publications and ezines including Fodor's Morocco, Parents' Press, The New Dominion and Expat Women. SHE'S LIKE A RAINBOW, which was recently published, is her second novel.

Colucci holds a BA in French and English from the University at Albany, SUNY, and an MA in Education from Framingham State University.

When not writing, Colucci enjoys practicing yoga, taking long walks and playing with her chocolate Labrador Retriever, Phoebo. Now that she and her husband have four grandchildren, they spend as much time as possible in Virginia with their two sons and their families

Tulip
5.0 out of 5 stars Love
Reviewed in the United States 🇺🇸 on March 19, 2017
Verified Purchase
This is a book about love: the love between two girl friends growing up together, the love between a Moroccan architect and a girl from the US, the love between parents and children and the lingering love for people departed.
The book starts slow and it took me awhile to start liking it but it becomes a lot more interesting when she meets Larbi. The writer successfully brings the world in it to life. The French town, the Moroccan daily life... As the writer is living for decades in Morocco the book gives you in my opinion a real glimpse of Moroccan life. I wondered if some things were not more or less a personal memoir.
At first I had the feeling the writer ended the book too suddenly. I was annoyed how the girlfriend did not tell the husband about how happy his wife had been when she had discovered something. The limbo we as readers ended up in. But after a day or so - while I was still thinking about the novel - I think that limbo might be part of the charm.

Kevin O'Connell
5.0 out of 5 stars Highly-recommended
Reviewed in the United States 🇺🇸 on December 8, 2017
Verified Purchase
Eileen Colucci has written an intensely-personal, heartfelt and thought-provoking novel - one with an almost-poignant cross-cultural thread, both welcome and needed in a time of intolerance and fear. Her writing style is comfortable despite the oft-times serious nature of the story, which she tells beautifully and with great sensitivity. A marvelous book!
Read more
Helpful
Report abuse

Brad A.
5.0 out of 5 stars A book worthy of Oprah's Attention!!!
Reviewed in the United States 🇺🇸 on September 19, 2007
Verified Purchase
...finally, a book that bridges the unnecessary divide between the Christian and Muslim worlds. As someone who as spent more than 2 decades working and living with the Arab peoples I found the timing of this book excellent and a topic worthy of any Book Club. Well done Ms. Colucci and thanks for taking the time to write this work.

Tanz
5.0 out of 5 stars Loved this book!
Reviewed in the United States 🇺🇸 on January 29, 2018
Verified Purchase
This is a wonderful book!! Well written, captivating, poignant and life affirming. What more could you want from a good read?!
Read more
Helpful
Report abuse

G. Verduzco
4.0 out of 5 stars Excellent story!
Reviewed in the United States 🇺🇸 on January 31, 2009
Excellent story! Struck many chords with me, since I too, am a "mixed-couple" - I never think of it anymore, but apparently other people still do.

A great part of the book is about struggles Lorraine had with her new home of Morocco, new traditions, and religious differences. What struck me was Lorraine and Larbi saw nothing insurmountable about their relationship, even when others did. Lorraine was continually warned about marrying a Muslim, a Moroccan, and a "non American". I thought it was wonderful how the author didn't exhaust the reader with continual antagonistic fights, and struggles of culture clashes, and religious rights and wrongs. Rather, it was a love story, two people with whom love really did conquer all.
Read more
Helpful
Report abuse

Joseph de Dominicis
5.0 out of 5 stars Wonderful love story
Reviewed in the United States 🇺🇸 on November 9, 2013
A wonderful, passionate love story. I had a hard time putting it down, and finished it in a couple of days. The writing is so skilled. Rich, yet very light. I cannot wait to read her next work of art. Highly recommend this delightful novel.
Read more
Helpful
Report abuse

Jean M. Loiseau
5.0 out of 5 stars Perfect for our time
Reviewed in the United States 🇺🇸 on April 12, 2008
A great novel, a great writer, a great insight into Moroccan culture. A must read.
Read more
Helpful
Report abuse
See all reviews