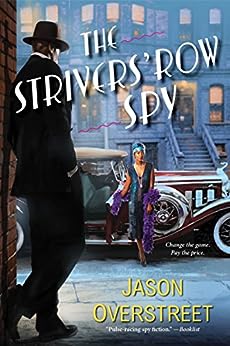 by Jason Overstreet (Author) Format: Kindle Edition
Book 1 of 2: The Renaissance Series
See all formats and editions
Sorry, there was a problem loading this page. Try again.
Suspenseful and evocative, Jason Overstreet’s debut novel glitters with the vibrant dreams and dangerous promise of the Harlem Renaissance as one man crosses the lines between the law, loyalty, and deadly lies…

For college graduate Sidney Temple, the Roaring Twenties bring opportunities he never imagined. His impulsive marriage to independent artist Loretta is a happiness he never thought he’d find. And when he’s tapped by J. Edgar Hoover to be one of the FBI’s first African-American agents, he sees a once-in-a-lifetime chance to secure real justice.

Instead of providing evidence against Marcus Garvey, prominent head of the “dangerously radical” back-to-Africa movement, Sidney uses his unexpected knack for deception and undercover work to thwart the Bureau’s biased investigation. And by giving renowned leader W. E. B. Du Bois insider information, Sidney gambles on change that could mean a fair destiny for all Americans...

But the higher Sidney and Loretta climb in Harlem’s most influential and glamorous circles, the more dangerous the stakes. An unexpected friendship and a wrenching personal tragedy threaten to shatter Loretta’s innocent trust in her husband—and turn his double life into a fast-closing trap. For Sidney, caught between the Bureau and one too many ruthless factions, the price of escape could be heartbreak and betrayal no amount of skill can help him survive.

Praise for The Strivers’ Row Spy

“Overstreet has done a phenomenal job of weaving a story of mystery and intrigue against a Harlem backdrop.” —New York Journal of Books

Next 2 for you in this series See full series
Total Price: $8.98
Books In This Series (2 Books)
Complete Series
The Renaissance Series
Kindle Edition
Page 1 of 1Start OverPage 1 of 1
Previous page
Next page

Jason Overstreet grew up in Colorado, Texas, and New Mexico. He attended two Southern California universities, earning a B.A. and M.S. before spending ten years in the field of education. After attending UCLA's Professional Program in Screenwriting, he turned to writing fiction full time. He lives in Los Angeles. Visit him online at joverstreet.com. --This text refers to an out of print or unavailable edition of this title.

4.4 out of 5 stars
4.4 out of 5
65 global ratings
How are ratings calculated?
To calculate the overall star rating and percentage breakdown by star, we don’t use a simple average. Instead, our system considers things like how recent a review is and if the reviewer bought the item on Amazon. It also analyzes reviews to verify trustworthiness.
Top reviews

Myron Clifton
5.0 out of 5 stars Harlem, Marcus Garvey, Black spies, and so much more
Reviewed in the United States on December 9, 2019
Verified Purchase
This is an enjoyable and unique book and debut novel by Overstreet. Taking and immersing us in the sights, sounds, textures, and struggles of the roaring 20's from the eyes of a Black spy who is tasked with spying on Marcus Garvey and his back to Africa movement that, though most Americans have little knowledge of, was a pivotal movement during the early part of last century. Weaving a complex tale of Black independence, government interference and illegal domestic spying, Overstreet successfully captures the mood of the setting and without becoming preachy, allows the reader to find his/her own current associations to similar government activities against other, more recent Black independence movements including Dr. King and Malcom X, Black Panthers, and on to Cointelpro and the mysterious deaths of 17 protestors from the Ferguson protests following the murder and body desecration of Michael Brown. I loved the serious conversations that explored Black relationships and the diverse views and opinions of what was the best course for Black Americans just a generation after being "free" in words only. Segregation, lynchings, unequal justice, lack of jobs and resources, are all discussed or surface in some way that is part of the story - but none overtake this character driven story that slowly develops a plot that is rich and intricate. I admit to having to read a few paragraphs multiple times to really understand plot points, and I am glad I did as the reward was worth it. As the first book of two, the author takes the time to recreate the world for the reader and it is necessary though very detailed so prepare for that because it pays off later in the story. I like Overstreet's writing style because it is direct and crisp and treats the reader with respect - like joining a college course where one has already completed all prerequisites. But it is also an approachable novel for readers who like to be transported to another recent time in our own history. I look forward to reading the next novel in the series where I can follow the characters and see where some plot points take us next.
Read more
2 people found this helpful
Helpful
Report abuse

Mal Warwick
TOP 500 REVIEWER
4.0 out of 5 stars An excellent introduction to African-American history in the pivotal 1920s
Reviewed in the United States on September 19, 2019
Verified Purchase
The 1920s were a pivotal era in African-American history. Black soldiers returning from service in World War I brought new energy to the slowly gathering movement for equal rights. Nationally, the NAACP, formed in 1909, was working for the passage of an anti-lynching law to combat the resurgence of racist violence sparked by the newly energized Ku Klux Klan. The editor of the NAACP journal, the brilliant scholar W.E.B. DuBois, was the organization's most visible and respected voice of authority.

Meanwhile, the Jamaican demagogue Marcus Garvey was promoting an alternative vision of Black activism with the Back-to-Africa movement he promoted through his United Negro Improvement Association (UNIA). And in New York, the Harlem Renaissance was underway, attracting Black artists, musicians, actors, and writers from throughout North America and the Caribbean. And all of this color and tumult comes to life in Jason Overstreet's engrossing novel of domestic espionage, The Strivers' Row Spy.

Sidney Temple has just graduated from Middlebury College with a master's degree in civil engineering when he is recruited to spy for the Bureau of Investigation (then the BOI, later the FBI). J. Edgar Hoover and his red-baiting boss, Attorney General A. Mitchell Palmer, are convinced that both the NAACP and the UNIA are dominated by Communists—apparently believing that even W. E. B. DuBois and Marcus Garvey are themselves Communists. Sidney's job is to uncover evidence of criminal wrongdoing by Garvey that will enable the BOI to imprison him. (Other agents are assigned to DuBois.) The assignment leads Sidney into a thicket of intrigue that will threaten his life and his marriage.

Many of the leading personalities of the day make appearances in The Strivers' Row Spy. Hoover, then head of one department in what was at the time the BOI, recruits Sidney. Who takes the bait to spy on Marcus Garvey and the UNIA in order to gather intelligence for his hero, W.E.B. DuBois, Garvey's sworn enemy. And to maintain Sidney's cover as a consulting engineer he takes on the job of helping build the new Abyssinian Baptist Church in Harlem for the Rev. Adam Clayton Powell Sr. The radical journalist and patron of the Harlem Renaissance, Max Eastman, and the NAACP leader James Weldon Johnson both make appearances as well. As a result, The Strivers' Roy Spy is a lively introduction to African-American history in the 1920s. It's also a tense, carefully plotted thriller that keeps the reader's attention from beginning to end.
Read more
One person found this helpful
Helpful
Report abuse
See all reviews