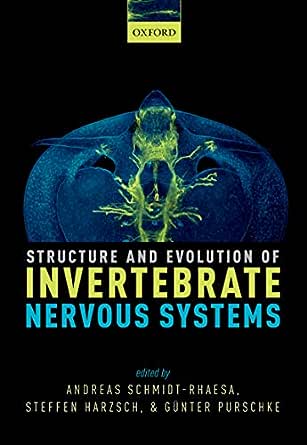 Flip to back Flip to front
Audible Sample Playing... Paused   You are listening to a sample of the Audible narration for this Kindle book.
Learn more
ISBN-13: 978-0199682201
ISBN-10: 0199682208
Why is ISBN important?
ISBN
This bar-code number lets you verify that you're getting exactly the right version or edition of a book. The 13-digit and 10-digit formats both work.


"This is an important, up-to-date, and highly useful summary of comparative neuroanatomy among the invertebrates, by 78 of the worlds top neuroanatomists. How I wish this book had been available while writing my own invertebrate textbooks.The volume by Schmidt- Rhaesa et al. belongs in every invertebrate zoologists library. It will stand the test of time." -- Richard C. Brusca, The Quarterly Review of Biology
--This text refers to the hardcover edition.

Andreas Schmidt-Rhaesa studied biology at the universities in Giessen and Gottingen, Germany, where he received his PhD in 1996, working on the ultrastructure and phylogeny of horsehair worms (Nematomorpha). As postdoc, he worked in Jim Garey's lab at the Duquesne University in Pittsburgh and at the University of South Florida in Tampa, USA on molecular systematics of nematomorphs. Between 1998 and 2004 he was scientific assistant in the working group of Thomas Bartolomaeus at the University of Bielefeld, where he then did a postdoc between 2004 and 2007. Since April 2007 he has been Curator for Lower Invertebrates at the Zoological Museum of the University of Hamburg. His research interests include animal morphology and systematics, with particular interest in the taxa Nematomorpha, Gastrotricha and Priapulida.

Steffen Harzsch obtained his PhD from the University of Bielefeld, Germany in 1995 working on neurogenesis in crustacean larvae at the Department of Neurobiology and in the lab of Klaus Anger at the Marine Biological Station on the island of Helgoland in the North Sea. After a postodc at Wellesley College, Massachusetts, and a Heisenberg Fellowship of the German Research Foundation, he worked from 2007 to 2008 as a group leader for neuroanatomy in the Department of Evolutionary Neuroethology at the Max Planck Institute for Chemical Ecology in Jena, Germany. In 2009, he received tenure as a full Professor of Cytology and Evolutionary Biology at the Ernst Moritz Arndt University of Greifswald, Germany. His expertise is in studies on neurophylogeny and NeuroEvoDevo of arthropods and Chaetognatha.

Gunter Purschke, Professor at the University of Osnabrueck, Germany, is working on morphology, systematics, phylogeny and evolution of Annelida and related taxa. His research interests currently focus on evolution and diversity of photoreceptor cells and eyes, of the central nervous system and body wall musculature. He studied biology and chemistry at the University of Gottingen, and earned his PhD in Zoology in 1984. He was subsequently assistant at the University of Osnabrueck to the chair of Systematic Zoology (Prof. W. Westheide). After having received the venia legendi for Zoology (1997) he was appointed as extraordinary professor in 2002. Since 2004 he has been working with the chair of Zoology and Developmental Biology (Professor A. Paululat).
--This text refers to the hardcover edition.