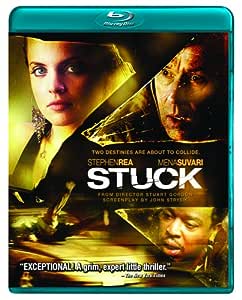 Mena Suvari (American Beauty) unforgettably stars as Brandi, a hard-partying, overworked nursing assistant in this delicious, darkly humorous psychological thriller from director Stuart Gordon (Re-Animator, From Beyond). Brandi accidentally steers her car into a homeless man, movingly played by Stephen Rea (The Crying Game), sending him flying through the windshield. Not wanting to jeopardize a possible job promotion, she chooses not to get him medical help, leaving him clinging to life in her garage. But soon her psyche begins to unravel as captor and captive are pitted against each other in a bloody...even outrageous battle for survival. Director Stuart Gordon delivers what Variety called "ingeniously nasty and often shockingly funny" entertainment.

4.2 out of 5 stars
4.2 out of 5
151 global ratings
How are ratings calculated?
To calculate the overall star rating and percentage breakdown by star, we don’t use a simple average. Instead, our system considers things like how recent a review is and if the reviewer bought the item on Amazon. It also analyzes reviews to verify trustworthiness.
Top reviews

Nalisha
3.0 out of 5 stars Ending was nothing like the true story ending
Reviewed in the United States on November 27, 2018
Verified Purchase
3 stars.
Beginning and middle great, however for it to be based on a true story .. the ending thumbs down. In real life, the lady told on herself, the boyfriend didn't die and the victim died causing the lady 50 years in prison (boyfriend and his cousin serving time also). NOW, if it wasn't based on a true story ... the ending was a cool with a karma will hit you ending! O I felt bad laughing at some scenes but the light humor was funny.

Enduring LipSticks and Beauty
4.0 out of 5 stars Totally Worth it for the Humor
Reviewed in the United States on August 15, 2018
Verified Purchase
I liked how fast paced the movie was. Rashid's character, especially, was fun to watch. Overall, it was an entertaining 85 minutes. I had no idea it was based on a true story! The woman who actually killed the homeless man went to prison for 50 years. She was also black. So, it's odd that they used a white actress. But, then again...with all the racism happening at the time the movie came out, it's no wonder they didn't want to portray a black woman in a negative light.
Read more
2 people found this helpful
Helpful
Report abuse

Prospero
3.0 out of 5 stars Suvari is why it is good
Reviewed in the United States on February 17, 2019
Verified Purchase
It was OK, it seemed ridiculously drawn out to me although the whole thing takes place in 24 hours or so. Mena Suvari did an absolutely magnificent job on her part and really that's why this film is as good as it is. A different title might have helped get it more attention too
Read more
Helpful
Report abuse

Barry L.
5.0 out of 5 stars It's a wow movie and based on facts, wow!
Reviewed in the United States on September 30, 2019
Verified Purchase
Based on a true story and you wonder how depraved a person has to be for this movie plot to actually be true. Great movie.
Read more
Helpful
Report abuse

J. West
5.0 out of 5 stars A Thrill Suspense Movie
Reviewed in the United States on January 30, 2017
Verified Purchase
Great performance by Mena Suvari and Stephen Rae. What a thrill ride this was. Very suspense and exciting. The end was sad but it can happen to anybody. Great movie.
Read more
2 people found this helpful
Helpful
Report abuse

Chellemomma
5.0 out of 5 stars Highly recommended!
Reviewed in the United States on May 25, 2018
Verified Purchase
I loved this movie. Unexpected and pretty messed up situation. It was pretty bloody, but I like gore so this was just fine. Good acting too. I didnt find any humor in it really. Suspense and drama was more like it.
Read more
Helpful
Report abuse
See all reviews

No1MovieFan
4.0 out of 5 stars It does stick in your mind, challenging stuff
Reviewed in the United Kingdom on January 30, 2010
Verified Purchase
I came across this film completely by accident of course, but it's amazing what you can find on the internet, and I was reluctant to get it at first, because I knew it would be pretty grim, except it sounded fascinating and I wanted to see Mena Suvari in action. What I got was a damn clever thriller that was based on a true story, which doesn't actually surprise me. And they say that truth is stranger than fiction!! Not in this case, it's not. Apparently, in the real life incident, the driver was prosecuted, but I don't know what happened to the victim. In the film, that was hardly going to happen. It was played out with extreme dark humour, (reminded me of the satirical bite of Robocop actually), and I thought Stephen Rea was extraordinary as the man who is 'stuck' in the windscreen. What amazing effects and it didn't even feel far fetched either. It wasn't anyway, since it was based on fact.
What starts off as a grim story about an accident, delves into what really can happen when you refuse to face consequences of actions which you know will land you in trouble. And Mena Suvari was outstanding as the nurse who has one moment of carelessness which changes her life, but it was the nuances in her character as the film goes on that were impressive. Imagine a nurse who discovers a rather darker side to her nature and her psyche goes through a major change. A nurse!! Ironic in itself. And look out for the scene when she goes a bit crazy when she catches her boyfriend with another girl, and she turns violent!! She starts out being the scared woman who's done something awful, then she turns into a kind of captor, for fear of prosecution (and maybe something else), and she's after a promotion as well. All the stuck man wants is help, but he soon realises that something is very wrong and is forced to help himself, which he actually manages to do, and it becomes a battle for survival. A homeless man really has nothing to lose, so his survival instincts are pretty strong.
It makes for quite grim viewing I suppose, but it certainly has a lot to say about human nature, and it keeps you guessing until the very end. Personally though, I don't think it's quite as grim as many have made it out to be. A car crash itself is grim, but that doesn't mean to say it has to be depressing. I have a copy now and I'm keeping it. Pretty challenging stuff I thought.

Elleppi
4.0 out of 5 stars Maybe Gordon best film, a tense and ambiguous thriller staged like a theatrical bloody drama in a garage
Reviewed in the United Kingdom on September 6, 2015
Verified Purchase
By the director of Edmond and Re-animator, a kind of real horror, where the fear comes from the violence of revenge and the deep brutal instincts hiding inside normal people in danger.
It is a kind of theatrical drama, since it is mostly set in a garage with a man stuck in a windshield, but this is enough to create a featurelenght film full of tension and a politically uncorrect and ambiguous morality.
Read more
One person found this helpful
Report abuse

James
5.0 out of 5 stars Five Stars
Reviewed in the United Kingdom on January 9, 2016
Verified Purchase
Simple story with a fantastic moral twist keeps you watching,me and my misses enjoyed it
Read more
One person found this helpful
Report abuse