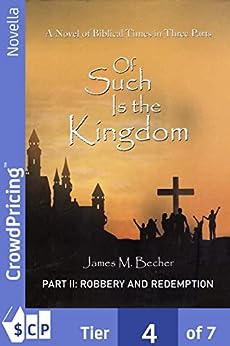 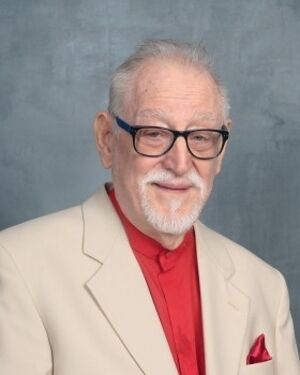 by James M. Becher (Author, Narrator) Format: Kindle Edition
Book 2 of 3: Of Such Is The Kingdom, A Novel of Biblical Times in 3 Parts
See all formats and editions
Sorry, there was a problem loading this page. Try again.
Did you enjoy PART I of this historical fiction novel of Biblical and Roman times? This volume picks up where PART I left off.

The insurrection having failed, Barabbas and his men find a cave in which to hide out. But Barabbas, unsatisfied, decides to try robbery. He enlists the help of the two beggars and they set out to rob rich Benjamin. But Timotheus almost turns back, after seeing the Nazarene. Will he go on to aid in this crime? Will it be successful, or will this also result in disaster?

Meanwhile, non-conformist Manaheem tries to blackmail Herod over his part in the insurrection and loses his one true love, his former wife Claressa, also a non-conformist, with whom Manaheem is trying to reunite. Will he get her back? More importantly, will he, as well as Barabbas and Timotheus find the fulfillment they have been seeking?"

"The story has a powerful message that has clearly been displayed throughout the novel. Mr. Becher takes you through a wide range of emotions from beginning to end.... This is a great novel that I'm sure you will enjoy" ----Rudelle Thomas (Divine Eloquence)
Read more
Previous page
Next page

Next 2 for you in this series See full series
Total Price: $4.68
Books In This Series (3 Books)
Complete Series
Of Such Is The Kingdom, A Novel of Biblical Times in 3 Parts
Kindle Edition
Page 1 of 1Start OverPage 1 of 1
Previous page
Next page

Reader’s favorite award winner James M. Becher writes to help readers find true fulfilment through faith... Born in Lancaster, Pennsylvania, he was an avid reader in his youth, especially interested in other time periods. In Jr. College, he won second prize in a contest with the Biblical short story, Beggarman-Thief.

A graduate of Clearwater Christian College, and Biblical School of Theology, James was ordained in 1974, and served as assistant or associate pastor or Bible teacher in several churches. He also served in a foreign student ministry, which is where

he met his wife, Berenice from Venezuela. It was there also that he began working on the Biblical novel Of Such Is The Kingdom, based on his prize winning short story, Beggarman-Thief and dealing with some unique seekers who might have lived in the time of Jesus.

In 1984, James and his wife spent a year and a half in Venezuela, where, while

teaching English, he also worked on his second novel, Impossible Journey, a time

returning to the U.S., he completed his Biblical novel, Of Such Is The Kingdom.

It was published in 2003. He then completed Impossible Journey and it was

adding a Part III about the early Church.

James has also published, written articles for and edited the bi-weekly ezine,

"Inspirational Success Tips." His articles from the ezine now form the major

part of his self-help book, Principles of the Kingdom.

In November of 2012, he preached his unique "Christmas Victory" message, which resulted

in the writing of his latest novel, The Christmas Victory, A Gem of A Sermon,

James updated all his books, re-doing the cover of Impossible Journey to reflect

the content, publishing 4 editions of Of Such Is The Kingdom, and adding a

2020, he re-published Of Such Is The Kingdom through WestBow Press, revising it

again, with fact-checking for historical accuracy. And in September of 2020, it

Visit James online at James M. Becher (author) on AuthorsDen and connect with