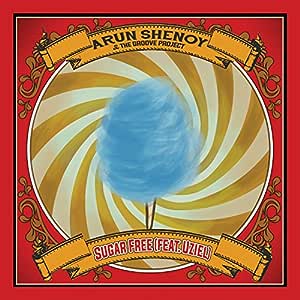 SUGAR FREE is the first single from ARUN SHENOY s new contemporary instrumental album A STAGEY BANK AFFAIR. Featuring, Uziel on the keyboards, the Bansuri Funk music on the single is supported by a visual aesthetic based on vintage poster illustrations and animation.

The first single from A STAGEY BANK AFFAIR - an immersive audio visual experience of the Bansuri Funk Music, Artwork, Animation, Liners and Physical Packaging. "Bansuri Funk" is sound stylized by the fusion of Funk, Jazz and Rock with a spicy hint of Worldly Pleasures, the latter being a reference to the blazing performance on the traditional Bansuri by acclaimed flautist Ravichandra Kulur.

The album s title, A Stagey Bank Affair, draws inspiration from a popular phrase in the North East of England that goes a house like stagey bank fair. The phrase is actually a reference to an agricultural fair at Stagshaw Bank, near Hexham, Northumberland. Legend has it that over the years, the farming side dwindled and the remaining fair became more associated with gambling and drinking. Renowned for its rowdy and notorious repuatation, the fair was eventually closed in the 1920s, and the phrase Stagey Bank fair passed into common parlance to indicate a mess in general.

A Stagey Bank Affair, is thus a metaphor for a place which used to be a fun fair, and now means a messy affair, kind of like adulthood is. Growing up just means we stop growing and stop having fun. Fairgrounds are where our inner child finds play and a place, where we can say 'whee' and spin around in circles, become dizzy and life's worries don't matter. The music and visuals on the album are meant to represent the wonderland that we all have within us, along with the inherent sadness and chaos that we take up every day as adults. So yes, there is enough happiness in music, even when we're sad, or are afraid of clowns.

The visual aesthetic used for the fairground concept, conceived by Art Director Roshni Mohapatra, and brought to life by the team at Actuality Films NYC with Robert Capria at the team, is presented in the format of vintage poster illustrations, animation and packaging that serve to create an immersive audio visual experience.