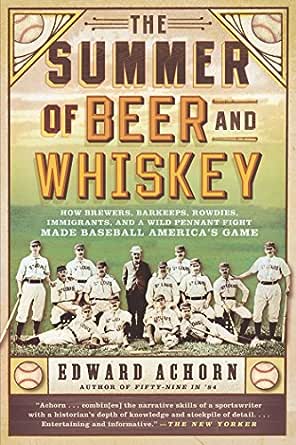 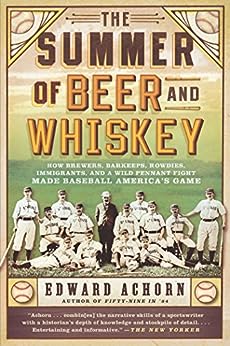 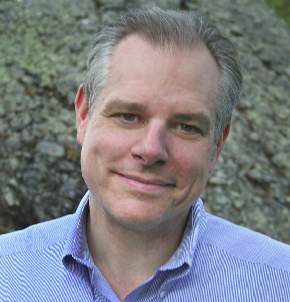 The Summer of Beer and Whiskey: How Brewers, Barkeeps, Rowdies, Immigrants, and a Wild Pennant Fight Made Baseball America's Game Kindle Edition

Kirkus Reviews
“A thoroughly enjoyable re-creation of the gusto, guts, glory and grime of the game's early days.”

Tampa Tribune
“The Summer of Beer and Whiskey strengthens the baseball fan's understanding of that raw, unvarnished era of baseball 130 years ago that eventually evolved into the smooth product we see today. Achorn writes passionately and presents an excellent history lesson.”

St. Louis Post Dispatch
“The Summer of Beer and Whiskey hinges on the hard-fought 1883 pennant race between Von der Ahe's ascendant Browns and the Philadelphia Athletics. The book is rich in newspaper accounts of the race, along with accompanying caricatures of the players. But Achorn also includes insightful digressions on topics ranging from the sport's persistent problems with racism and alcoholism to the peculiarities of 19th-century baseball, which featured barehanded fielders, one umpire per contest, and pitchers who could take a slight running start before each throw.”

Bill Littlefield, NPR's "Only a Game"
"The author makes a convincing case that it was an exceptionally entertaining time to be a baseball fan in St. Louis."

Providence Journal
"Edward Achorn ... favors us with a realistic and colorful look at early professional baseball."

The Daily Beast
"The time machine travels back to the 1880s as brewer Chris von der Ahe purchases the forerunner of the St. Louis Cardinals, with the singular purpose of selling more beer."

Los Angeles Times
"When it comes to baseball history, Edward Achorn has carved out his own territory, re-animating the 19th century game."

The New Yorker - The Sporting Scene blog
“Combining the narrative skills of a sportswriter with a historian's depth of knowledge and stockpile of detail, Achorn has produced a book that is both entertaining and informative.”

The Ft. Wayne News-Sentinel
“The Summer of Beer and Whiskey” is full of great stories and interesting tidbits of history.”

Library Journal
“Achorn…takes us back to when baseball was expressed in two words and one league—until the American Association was founded in 1882.” --This text refers to an alternate kindle_edition edition.

Edward Achorn, a journalist and Pulitzer prize finalist for distinguished commentary, is the deputy editorial pages editor of the Providence Journal and author of Fifty-Nine in '84: Old Hoss Radbourn, Barehanded Baseball, and the Greatest Season a Pitcher Ever Had. He has won numerous writing awards and his work appears in The Best Newspaper Writing, 2007-2008. His reviews of books on American history appear frequently in the Weekly Standard. He lives in Barrington, Rhode Island. --This text refers to an alternate kindle_edition edition.

4.5 out of 5 stars
4.5 out of 5
147 global ratings
How are ratings calculated?
To calculate the overall star rating and percentage breakdown by star, we don’t use a simple average. Instead, our system considers things like how recent a review is and if the reviewer bought the item on Amazon. It also analyzes reviews to verify trustworthiness.
Top reviews

Mark R. Brewer
5.0 out of 5 stars Baseball in 1883
Reviewed in the United States on May 20, 2013
Verified Purchase
Edward Achorn is a first-rate historian. His books are well researched and well written. Baseball history is merely the topic he chooses to write about, and that's a blessing to those of us who love to read about baseball in the 19th Century.

Achorn brings to life some wonderful characters--players, managers, and owners of the time. It is a cast worthy of Dickens, but these are real people. Perhaps the most memorable is Chris Von Der Ahe, a German immigrant who was instrumental in founding the league. He knew next to nothing about baseball, but he had money to spend, and he saw owning a ball club as a way to sell the beer his brewery made. His St. Louis Browns became the most successful team in the American Association's ten-year run. When the Association folded, four of its teams were absorbed into the National League, Von Der Ahe's Browns being one of them. They later changed their name to Cardinals. Achorn argues that Von Der Ahe belongs in the Hall of Fame. But the Hall seems to have ignored the American Association. One of its biggest stars, Harry Stovey, led the Association in home runs four times. He also led the NL in home runs twice. When he retired, Stovey had hit more home runs and stolen more bases than anyone alive. Why is he not in the Hall of Fame?

Achorn's book is a masterful history. His description of the pennant race is enthralling. As Abe Lincoln once said, "People who like this sort of thing will find this just the sort of thing they like.

Jeff
5.0 out of 5 stars 19th Century Baseball at its best
Reviewed in the United States on May 24, 2019
Verified Purchase
This was a delightful read! Baseball in 1883 wasn’t quite the game we know today. Although pitchers were no longer pitching strictly underhand, as in the early days of the game, they were required to release the ball below the shoulder. Pitchers usually stayed on the mound (which wasn’t yet a mound) the entire nine innings, Will White, who played for the Cincinnati Reds during the ’83 season, pitched in 401 major league games during his career and finished all but seven of them. (249) A batter had to take seven balls to be walked and they used the same ball throughout the game. By the end, it was often soft and harder to hit hard. Outside of the catcher, few wore gloves. Rules were often made up at the day of the game, such as times when the number of fans crowded into the outfield, the teams agreeing to count a hit into the fans as a ground-rule double. At this time, there was only one umpire, which made it easier for players to cheat. Even then players were known by nicknames such as Jumping Jack Jones (a pitcher who jumped with his release), Chicken Wolf (the only meat he’d eat was chicken of which he had 4 servings a day), Long John Reilly, and Old Hoss Radbourn. Achorn brings these characters to life as he tells the story of an exciting season.

In the early 1880s, baseball appear to be fading away. In the 1870s, a series of gambling scandals had rocked the game. The National League (the main league of the day) reacted by cracking down on gambling, but also beer sales at ballparks. With the hopes of attracting a more affluent crowd, they raised ticket prices to fifty cents (a lot for a working man). No games were played on Sunday. Then, in 1883, a new league was formed (American Association, not to be confused with the American League), which set ticket prices at twenty-five cents, allowed games on Sunday, and sold beer at the ball parks. Achorn makes the case that this league (known as the Beer and Whiskey League) helped save baseball. The tight pennant race of 1883, between Philadelphia Athletics and the St. Louis Browns, caught the public’s attention. At the end of the season, fans were gathering at empty ballparks to watch the scores being posted on the scoreboard as the results were telegraphed in. Achorn tells the story of the race in a way that brings it to life, capturing the excitement of the fans along with the personality of the players and coaches. Philadelphia won the pennant by one game, but they were floundering at the end of the season with worn-out pitchers. They were so beaten that they declined to play a series against the Boston Red Stockings, the winner of the National League pennant, which would have been the first “World Series.” They were welcomed home with a parade that rivaled the welcome given to veterans returning from the Civil War.

One of the key personalities in the story was the owner of the St. Louis Browns, Chris Von der Ahe. He was a German immigrant who owned a grocery store, then a beer garden. He risked it all on establishing a team, and made a fortune but later lost it. He is portrayed as impulsive, overbearing, but extremely generous. Interestingly, one of the players he recruited was Charlie Comiskey, who later founded the Chicago White Sox and who was remembered on their ball field (Comiskey Park) until 2003 when they changed the name to a corporate sponsor. Von der Ahe died in 1913. At his funeral, the “Reverend Frederick H. Craft wove baseball imagery into his homily:

“’First base is enlightenment; second base is repentance; third base is faith, and the home plate is the heavenly goal!’ He declared. ‘Don’t fail to touch second base, for it leads you onward toward third. All of us finally reach home plate, though some may be called out when they slide Home.'” (259)

Weaving into the larger story is the account of race relations at this stage of the game. There are two other African American ball players who played in the majors long before Jackie Robinson was born. Fleet Walker played for Toledo, a team that joined the American Association in 1884, and even before then William Edward White played for the National League’s Providence Grays. However, segregationist ideals were to win out and it wouldn’t be until 1947 when Jackie Robinson was called up to the Brooklyn Dodgers that the racial barrier was broken.

The American Association lasted only a decade. In 1892, the league’s top four teams joined the National League. These include the St. Louis Cardinals (formerly the Browns), the Cincinnati Reds, the Pittsburgh Pirates (formerly the Alleghenys) and the Brooklyn Trolley Dodgers (who joined the league in 1884 and are now the Los Angeles Dodgers). Achorn tells the story of how the Pittsburgh Pirates earned their name (given to them by sportswriters) after the “Alleghenys” tried to “steal” two ball players who had committed to play for the Philadelphia Athletics. (245). The Athletics eventually folded, but when a new team was organized in the city (which by then already had the Phillies), they adopted the name Athletics (which left Philadelphia for Kansas City and now are in Oakland). Another American Association team that must have had a similar reincarnation is the Baltimore Orioles.

I enjoyed this book. My only suggestion is that I would have liked to have seen the year put more into context of what was happening outside of baseball. Achorn does this a little, such as referring to a joke about a player who, the year before upon President Garfield’s assassination, was asked about the event. The ballplayer responded by asking what position Garfield played. He also mentions the shooting of Jesse James, in connection to the governor of Missouri attending a ball game. The governor had made it a priority to wipe out the James Gang and had recruited members of the gang to shoot Jesse. When Robert Ford was convicted of the murder of Jessie James, the governor pardoned him two hours after the trial and then sent him $10,000 in reward money.

If you love history and baseball, I recommend this book.