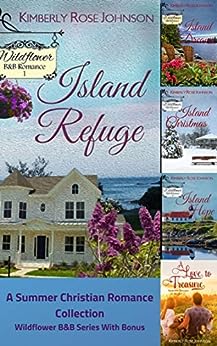 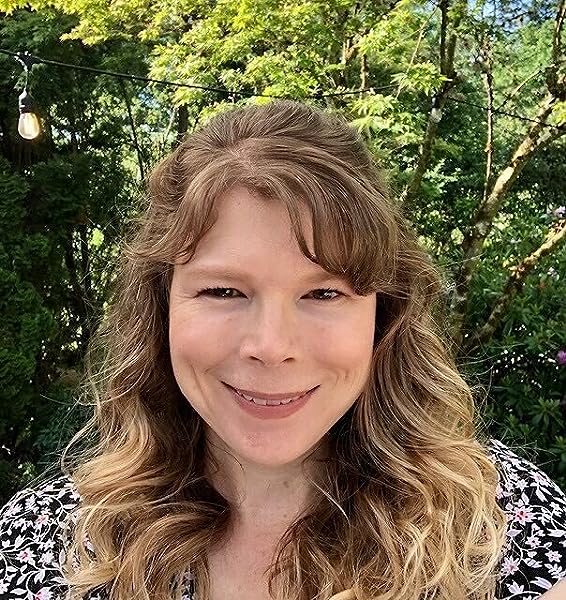 by Kimberly Rose Johnson (Author) Format: Kindle Edition
See all formats and editions
Sorry, there was a problem loading this page. Try again.

Relax by the pool with an iced beverage and binge-read five inspirational romances filled with memorable characters, a touch of mystery, and heartwarming stories that you will carry with you long after the books are finished.

A heartbroken chef and a burned-out doctor seek solace and a new beginning on a tiny Puget Sound island at the Wildflower B & B, and discover the bed and breakfast is a place of healing, adventure, and romance. Book one in the series.

A land developer with something to prove comes to Wildflower Island to develop her family’s land. She soon finds herself at odds with adjoining property owner. If only she wasn’t attracted to him. Book two in the series.

A self-proclaimed workaholic comes to Wildflower Island hoping to take life at a slower pace. When a new guest at the Wildflower B&B catches his eye, he is drawn to her. But how will a woman and her young son fit into his future—a future that’s uncertain at best? And most of all, how can he reconcile her lack of faith in God with his strong religious beliefs. Book three in the series.

A metal sculptor gave up on art when her creativity was zapped by another person's actions, she takes a job on Wildflower Island. She never imagines that a job at the Wildflower Resort will turn everything in her life upside down.

A lonely widower throws all his energy into raising his teenage daughter, but when he is promoted to manager of the Wildflower Resort, things at home don’t go as smoothly as planned. Worried about his relationship with his daughter, he seeks advice from a feisty-but-sweet newcomer. Will she help smooth his path or will things only get more complicated? Book four in the series.

A Love To Treasure

School teacher Nicole Davis is on summer break, but this vacation is unlike any other. Her beloved Grandmother’s final wish has landed Nicole smack in the middle of her favorite destination—Sunriver, Oregon, following Grams’ clues on a mysterious scavenger hunt. Unexpectedly, Nicole finds more than just a fellow sleuth in a handsome police officer, Mark Stone. But Mark must return to his job in Portland at summer’s end, and Nicole must guard her heart.

Mark is hoping for a quiet summer in Sunriver as he contemplates his future in law enforcement, but a string of burglaries draws him from his self-imposed break from detective work and thrusts him into the middle of the investigation. To complicate matters, Nicole is in jeopardy, and he knows his growing feelings for her could cloud his judgment. Will their differing career goals be the end of their summer romance—or just the beginning of forever after? Book one in the series—book two and three available on Amazon or via Kindle Unlimited today!

Purchase A Summer Christian Romance Collection now and start your own virtual vacation.

Award winning author Kimberly Rose Johnson married her college sweetheart and lives in the Pacific Northwest USA. From a young child Kimberly has been an avid reader. That love of reading fostered a creative mind and led to her passion for writing. She especially loves romance and writes contemporary romance and romantic mystery and suspense with a heart.

Kimberly holds a degree in Behavioral Science from Northwest University in Kirkland, Washington, and is a member of American Christian Fiction Writers.

alexa wilson
5.0 out of 5 stars each book flows into the other giving a true feeling of a community.
Reviewed in the United States 🇺🇸 on July 6, 2019
Verified Purchase
the wildflower b.an.b is a part of each story,almost a character itself. people meet and lives intertwine within the rooms esp. the kitchen, the backyard, and the front porch in each story.
I really enjoyed the flow of people we meet in one book remaining a true part in each of the stories instead of just being abstract fill-ins when needed.
it gave the book an authentic sense of community.
plus giving a continuance of the characters from one book to another gave me a chance to catch a little update into how their lives are going.
this is a series of stories that flowed well. the reader is invited not only into the inn which comes to life in each story but a sense of community. I felt as a reader a part of that community. it's not a real place but I will miss visiting there through the stories.
Read more
4 people found this helpful
Helpful
Report abuse

JUNEBUGG
5.0 out of 5 stars Fantastic
Reviewed in the United States 🇺🇸 on June 14, 2021
Verified Purchase
This is a great instigating. Collection of wonderful stories all brought together in a great book.Kimberly artfully brought the plan of salvation , which anyone could understand. I loved every one of the stories which kept adding the people and continuing their stories and continuing their lives
Hisglo@gmail.com
Read more
Helpful
Report abuse

Faithdp24
5.0 out of 5 stars Island of Love
Reviewed in the United States 🇺🇸 on September 19, 2020
Verified Purchase
This was a series of stories set primarily on a small island off the Washington coast. Every story is a delightful romance with likeable and even loveable characters who aren't looking for a relationship, but they find it anyway. Every story is completely different, but each one is worth reading. Highly recommend it if you enjoy Christ centered stories.
Read more
Helpful
Report abuse

Kindle Customer Nana Jan
5.0 out of 5 stars Great Collection of Uplifting Romances
Reviewed in the United States 🇺🇸 on August 24, 2019
Verified Purchase
A good collection of Christian romance stories. Nice to read spiritually written love stories. Showing God's love, guidance and support if we follow His word.
Not always an easy path, but always best. Great to know God is always near. Each story stood alone, but a great buy for avid readers.
Really like all the descriptions of Wildflower Island, the houses, and what friends can bring to our lives.
Read more
3 people found this helpful
Helpful
Report abuse

Amazon Customer
5.0 out of 5 stars I love a “dream come true” story!
Reviewed in the United States 🇺🇸 on January 27, 2021
Verified Purchase
This is a perfect story for my 13 year old granddaughter! It’s a faith journey that reminds us about how the Lord cares tenderly about and is involved in our lives.
Read more
Helpful
Report abuse

Cathy
4.0 out of 5 stars FANTASTIC
Reviewed in the United States 🇺🇸 on August 25, 2019
Verified Purchase
There are 3 books....all interweaving...the characters are great, the storyline was great and everything was believable! The bonus book was just as enjoyable! I have never read any of Ms Johnson's works before but I will now be seeking her books out😀
Read more
Helpful
Report abuse

mfa
4.0 out of 5 stars Good read
Reviewed in the United States 🇺🇸 on September 24, 2019
Verified Purchase
These books were very enjoyable reads. I liked the Christian theme throughout and the sweet romances. Sometimes books in bundles start out good and then dwindle down...not so in this case.
Read more
One person found this helpful
Helpful
Report abuse

HAL
4.0 out of 5 stars 4.5 Stars for a wonderful collection of sweet romances
Reviewed in the United States 🇺🇸 on June 23, 2019
Verified Purchase
The stories were a bit predictable Johnson throws in just enough twists and turns in the developing romances to keep you lost in the joy of wholesome love stories. This is a great collection for teens and adults.
Read more
2 people found this helpful
Helpful
Report abuse
See all reviews

Rebecca Weisser
4.0 out of 5 stars Very enjoyable and relaxing
Reviewed in Germany 🇩🇪 on December 1, 2022
Verified Purchase
This set of stories was very enjoyable—I was able to relax and read, knowing that there wouldn‘t be a lot of graphic violence or dirty language. They were also an easy read—the plot was interesting and compelling, but not to complicated.
Read more
Report abuse

Kindle Customer
5.0 out of 5 stars Great
Reviewed in Australia 🇦🇺 on July 1, 2019
Verified Purchase
What a lovely spot! It makes you want to move there yourself! (Maybe not into the Poppy room!? Lol) Great wisdom in all the books too-about forgiveness and healing of past hurts; of not judging a book by its cover. Last one good on paying it forward. Enjoyed every moment of them.
Read more
Report abuse

Kindle Customer
4.0 out of 5 stars Lovely summertime read
Reviewed in Canada 🇨🇦 on October 2, 2019
Verified Purchase
Likeable characters, interesting story lines that intertwine, good escapist fun. And with God and faith, often dormant and reawakened, part of each character.
Enjoy!
Read more
Report abuse
See all reviews
Report an issue
Does this item contain inappropriate content?
Report
Do you believe that this item violates a copyright?
Report
Does this item contain quality or formatting issues?
Report