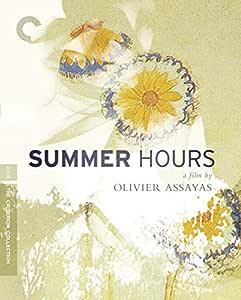 Widely hailed by critics as 2009’s best film, Summer Hours is the great contemporary French filmmaker Olivier Assayas’s most personal film to date. Three siblings, played by Juliette Binoche, Charles Berling, and Jérémie Renier, must decide what to do with the country estate and objects they’ve inherited from their mother. From this simple story, Assayas creates a nuanced, exquisitely made drama about the material of globalized modern living. Naturalistic and unsentimental yet suffused with genuine warmth, this is that rare film that pays respect to family by treating it with honesty.

4.3 out of 5 stars
4.3 out of 5
143 global ratings
How are ratings calculated?
To calculate the overall star rating and percentage breakdown by star, we don’t use a simple average. Instead, our system considers things like how recent a review is and if the reviewer bought the item on Amazon. It also analyzes reviews to verify trustworthiness.
Top reviews

prisrob
TOP 100 REVIEWERVINE VOICE
4.0 out of 5 stars Death Is For The Living
Reviewed in the United States on May 25, 2014
Verified Purchase
'Summer Hours' is a film that takes us to the present. The mother of this family is celebrating her 75th birthday at their summer place outside of Paris. During this time she speaks to her oldest son, Frederic, played by Charles Berlinger. She wants him to know about the things she will be leaving behind, some very old and worthwhile when she is dead, and what should be done. She does not write anything down and does not trust lawyers. Her other children, Adrienne, played by Juliette Binoche is a very busy artist living in New York, and Jeremie played by Jeremie Renier lives in a China with his family. They visit once a year as the mother expects, and this film is really about them.

Of course, the mother soon dies, the family decides to sell everything or give some of the valuables to a museum. The memories of mom center around her living with her uncle, a great artist, after their father and her husband dies. They all have their memories, and we share a little about their lives and their families. This film is about their decisions and how they will proceed with their lives. It gives us a glimpse into our futures.

Shelagh Cosgrove
5.0 out of 5 stars Lovely film to watch any time of the year!
Reviewed in the United States on August 11, 2013
Verified Purchase
This is a beautiful portrait of a family at a very poignant stage in their life. The mother, now at an advanced stage of her life, has gathered her children and grandchildren from various places near and far, not only to celebrate her birthday, but to discuss and decide what to do with the rather valuable collection of art works left by her former husband--a well-known and very accomplished artist. Should it all go to a museum? Should the children (four of them) have an equal share of items? What about the house that has been the center-point of all their lives and activities for several decades--and we get delightful flashbacks of former times when everyone was young and full of impossible dreams and bliss. Reality has set in now--and there are distinct differences among the grown children, parents now themselves, about how to resolve it all. The film ends satisfactorily, but not without some real heart-searching among all of the important members of a fascinating family in a very crucial moment of facing up to some truths about the world as it is for them now.
Read more
One person found this helpful
Helpful
Report abuse

RYWTop Contributor: Makeup
3.0 out of 5 stars Just ok
Reviewed in the United States on July 9, 2017
Verified Purchase
Not a bad movie but not great either. Certainly didn't deserve the rave reviews, to me.
Read more
2 people found this helpful
Helpful
Report abuse

Kai Bergman
5.0 out of 5 stars Very well done French "slice of life"
Reviewed in the United States on December 16, 2017
Verified Purchase
If you want to take a short vacation in France, this is the next best thing. Wonderfully acted by an excellent cast, authentic and atmospheric, in the French cinema "slice of life" tradition.
Read more
Helpful
Report abuse

Artist
5.0 out of 5 stars Real French family manages passage
Reviewed in the United States on August 22, 2016
Verified Purchase
Loved this movie! So hard to capture real life experiences on film... this movie doesn't try to tie everything into neat packages suitable for mass audiences. Rather, loose ends make it work...while truly French, it tackles a universal life experience--passing inheritances to the next generation.
Read more
2 people found this helpful
Helpful
Report abuse

andy
2.0 out of 5 stars Dull, unengaging and disappointing
Reviewed in the United Kingdom on March 9, 2015
Verified Purchase
If you can empathise with the one of the characters in this film who puts immense value into pieces of glass, wood, canvas, a house its garden etc, and who, when he fails to see the same degree of importance put on a house and its contents by his siblings – then you may enjoy this film. On the other hand if you feel that it is people who count and not artefacts or buildings then you may have a different take on this film.

The most significant thing I noticed about this film was the way I just didn’t engage with it at all and found it uninteresting.

I really think it is a shame that that is how I feel about it because there are some very good actors in this film, there isn’t a bad line delivered anywhere. The camera work is good. Most of it would be good if it wasn’t for the way the narrative is delivered.

Although a well acted, albeit with dull characters, the director appears to have gone out of his way to tell what could have been a good story in an incredibly dull and…well yes just incredibly dull way.

Clearly many do like this film but for me, it was a disappointment.
Read more
One person found this helpful
Report abuse

Whitefish
3.0 out of 5 stars Good but a bit long winded
Reviewed in the United Kingdom on November 4, 2014
Verified Purchase
Very French which I love but slightly long winded. Worth it to see Juliet Binoche in all her glowing fabulousness.
Read more
Report abuse

technoguy
5.0 out of 5 stars A perfect day
Reviewed in the United Kingdom on March 18, 2011
Verified Purchase
Assayas,director of the monumental Carlos,with its worldly references,here shows he is also able to direct a quieter fictional film of the power of memories and the beauty of summer's passing.This drama about an elderly art collector,Helene(Edith Scob),whose birthday(75) brings the annual summer visit from her 3 children, Frederic (Charles Berling),an economist,Adrienne(Juliette Binoche), the designer for a Japanese store based in New York,and Jeremie,who works for Puma in China.They are accompanied by partners and children,although Adrienne is engaged to a man in New York who we see later in the film.

Nearing the end of her life,Helene is slightly depressed,thinking about passing on her estate in the country and her art collection, in memory of her uncle,artist Paul Berthier,to her son Frederick,who wants to share it with his siblings and her grandchildren.Her children begin to discuss what will happen to Helene's art collection(works by Bethier,by Redilon and Corot,as well as beautiful vases,cabinets and furniture) when she dies.Each sibling has different plans.Adrienne and Jeremie live abroad.Frederick is wanting to preserve the art works in the family and keep the country estate with the housekeeper Elouise for the family.We feel the draining away of authenticity and identity as the house becomes a ghost of itself.A nice touch is when Elouise is given one of the beautiful twin vases to take away when the house closes,saying she wouldn'y have wanted anything valuable.

The elegance and subtlety of treatment(without being talky),the concept of preserving or profiting from family heirlooms,the younger generation who have no connection to them,the uprooting and dislocating and dispersal of family life,is done with sentiment but without sentimentality.Berling carries the main load of the film very well,but the other actors are just right in this measured, poignant examination of time passing and life moving on in modern France.The younger generation spend one last week-end in this beautiful house in the country as they will not inherit it.Playing someinteresting music,surprisingly,by the Incredible String Band.A small gem.
Read more
2 people found this helpful
Report abuse

Steven Aldersley
4.0 out of 5 stars Life gives us difficult realities to face
Reviewed in Canada on January 10, 2011
Verified Purchase
***Spoilers within***

This is a story about how three adult siblings deal with their mother's death. It leaves their lives forever changed. They were raised in France and their childhood home is left to them. They have to decide whether to keep it or sell it and also decide what to do with some of the valuable possessions left behind.

It's a snapshot into the three lives. The film is dialogue-heavy because it tries to show what's going through the minds of the three siblings.

It's also a commentary on the modern world. How everyone has a telephone and is always in touch with other things that are happening. Two of the siblings have made a life elsewhere; one in New York and the other in China.

How important is tradition, culture and their past to these people?

The film is shot beautifully and looks and sounds incredible. Whenever we are at the house, the air is filled with the sounds of birds.

Most people eventually face what the three face in this story. I remember having to deal with such things about 17 years ago. It's well told and interesting.

Like many Criterion titles, this isn't for everyone. If you like to think about life and people, it may interest you. If you need a more obvious story with a stunning conclusion, look elsewhere.

I fall into the first category.
Read more
Report abuse
See all reviews