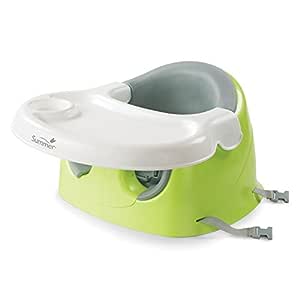 Visit the Summer Infant Store
4.3 out of 5 stars 574 ratings
| 49 answered questions
Currently unavailable.
We don't know when or if this item will be back in stock.

The Summer Infant Support-Me 3-in-1 Positioner, Feeding Seat and Booster is a multi-use seat designed with your child’s comfort in mind. A stand alone seat positioner with an infant support and soft foam insert helps infants learning to sit. The support and soft insert can be removed as your child grows, and the positioner transitions to a booster seat.

All plastic colorful material with foam insert for added comfort.

4.3 out of 5 stars
4.3 out of 5
574 global ratings
How are ratings calculated?
To calculate the overall star rating and percentage breakdown by star, we don’t use a simple average. Instead, our system considers things like how recent a review is and if the reviewer bought the item on Amazon. It also analyzes reviews to verify trustworthiness.

Amy
5.0 out of 5 stars Better than Bumbo
Reviewed in the United States on November 30, 2016
Verified Purchase
I have a Bumbo. I thought it was great...until I got this for my neice. Reasons this one is better: it's hard plastic so when your child stabs it with a pencil, fork, or other sharp object (don't judge unless you've raised a child without incident) it won't hurt it. Also, when they draw all over it with a pen, it will wipe off. Again, the Bumbo is soft and doesn't clean as easily. 2. The tray on it is just plain better. It goes further around the child and the sides on it are higher so pieces of food don't get away from little fingers. 3. The built-in safety strap is at a better angle to actually keep the kid strapped in. If you're worried about it not being as comfortable because it's hard, don't! It has a soft liner in it that keeps little legs from sliding or sticking. My niece is TINY for her age and has been using it since she could hold her head up. To keep super tiny babies from bobbling around in it just roll a blanket and stuff it in around them (just like the Bumbo ).
Read more
77 people found this helpful
Helpful
Comment Report abuse

Kadee
4.0 out of 5 stars Great seat for the price
Reviewed in the United States on September 4, 2015
Verified Purchase
So far this seat has met all of my expectations. My son was 5 months old when he started sitting in it, and within about 1 week he was sitting up without it for very short periods of time. I am not sure if this seat helped him sit up, but getting him in a seated position without holding him was very helpful.
He has also been eating solid foods for quite some time, so it was a relief to have a chair to place on the counter and get him used to eating food upright. That being said, the straps were stained within the first couple of days. I strapped him in the chair for about the first week, but quickly realized that they weren't going to do much good as long as the tray was in place. The straps do NOT come out of the foam insert very easy and take quite a bit of scrubbing to get off the food particles.
The tray is not easy to put on as other reviews have stated. My son is not chunky, and I still get concerned about squishing his sides on the tray. The snap of the tray is loud and once you get one side on, it takes a couple of tries to get the other side on all while dealing with a squirmy child.
Looking ahead, it wold be nice to have the foam insert store in the underneath side of the plastic seat, but since the chair straps are there, it is impossible.
Overall, this is a great seat for the price. If you are looking for a high chair type of seat, this is NOT the chair for you, but if you are looking for a chair that helps a child sit on the floor, or more of a booster seat, this is fantastic!

Trashby
5.0 out of 5 stars Good product!
Reviewed in the United States on April 4, 2017
Verified Purchase
Bought this for our 3 month old and he loves to sit up in it and play with suction toys on the tray. He's a big boy (18 lbs, 24 inches) so we immediately had to take out the grey insert. He's already quite big for the green part so I'm not sure how much longer it will last us....he'll definitely be too big for it to be a booster seat....but hey the price was right so why not! It can be a little tricky snapping in the tray...wouldn't want to accidentally pinch baby. Overall I think worth it to buy this and not pay 3x as much for the name brand.
Read more
5 people found this helpful
Helpful
Comment Report abuse

Nicole D.Top Contributor: Baby
5.0 out of 5 stars WAY better than Bumbo... at a fraction of the price! Great seat for kiddos learning how to sit (and beyond)!
Reviewed in the United States on July 20, 2017
Verified Purchase
This thing beats the pants off the Bumbo floor seat!

Around 5 months, we were looking for something a little more straight up than the sit-me-up floor sear we'd been using for our kiddos. I picked up both a Bumbo floor seat and this Summer Infant seat that is similar to the Bumbo multi seat (but less than half the price). The kids hated the Bumbo, but this seat was an instant hit. It seemed very comfortable for them, and they enjoyed being able to put things on the tray as well. This also made mommy happy since it was a fraction of the price of the Bumbo seat... let alone adding on the floor tray (separate purchase for the Bumbo)! Based on the picture alone, it seems that this is similar to the "multi-seat" that Bumbo sells. But, this one is far cheaper and the quality and fit seems to be great so far. Also, one of the gripes I had with the Bumbo was that the belt was in a super dumb place that more or less rendered it useless. The straps in this seat are positioned in a much more usable spot. I'm not a huge fan of the way the buckle works. It's tricky to unlatch, but I'm getting used to it. All factors considered, this one goes to Summer Infant, hands down!

My only complaints are: (1) the tray is a little tricky to get on the seat. I understand why they had to set it up in the way that they did. They had to have a stand-alone seat that could be used with or without the tray. So, I can deal with the way the tray snaps on and off. Make sure the kiddos have their arms out of the way, and snap it on. I also prepare them (and me) for the loud snapping noise that comes along with this! :) (2) The buckle is TRICKY to unlatch. You have to push straight in, apply quite hard pressure and it feels like you are going to snap the tabs off. I'm getting used to this, but would have preferred a more easy to use buckle.

PLEASE NOTE: There are 2 extra things that come with each seat and snap into the bottom of the chair. There is a little cap that goes on when this is used as a booster. It snaps in underneath the seat. We wouldn't have even known this part existed, if one of them weren't loose in the box when they arrived. I actually thought the other seat we bought was missing the part, then we checked underneath on a whim and noticed that it was snapped in a little hiding place. Handy! The straps that can be used to secure this to a chair also fit in a little spot under the chair when they are rolled up tightly. I appreciate that this will help us to keep everything together!

Why we returned the Bumbo seat: I loved the texture and softness of the Bumbo seat, but it did not work for us. We have average size kids, and they HATED the Bumbo seat immediately. It seemed like their little parts were being squished by the piece that goes up between the legs. Also, the belt is basically useless due to the way it is positioned. It's attached at the base of the seat right in the crotch area. There is no way to hold it up while putting a kid in the seat, so you have to go in afterward and fish it out. This is hard to do, and super uncomfortable for the kiddo, since they are already kind of squished in the seat. If I were to keep the Bumbo, we'd never be using the belt for this reason. They just didn't work for us!