Summer Lightning and millions of other books are available for Amazon Kindle. Learn more 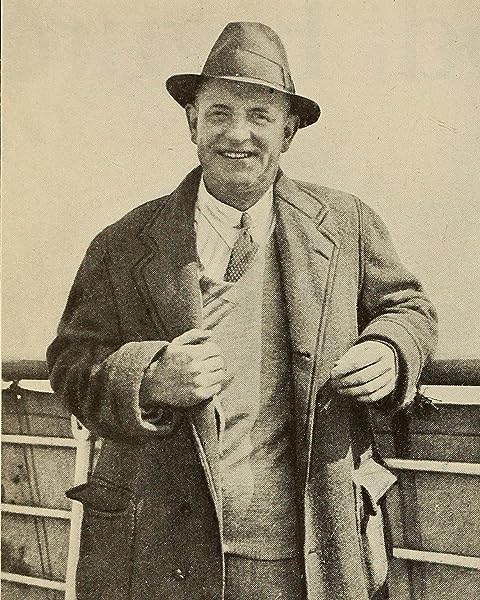 by P. G. Wodehouse (Author)
4.5 out of 5 stars 243 ratings
See all formats and editions
Sorry, there was a problem loading this page. Try again.
Read more Read less
Previous page
Next page

"The very definition of British humor . . . and as Overlook continues its reissue of these absurd souffles, you can buy the work for yourself in suave hardcover volumes, the dust jackets as natty as the prose."

P. G. Wodehouse (1881-1975) grew up in England and came to the United States just before World War I, when he married an American. He wrote more than ninety books, and his works, translated into many languages, won him worldwide acclaim.
Start reading Summer Lightning on your Kindle in under a minute.

4.5 out of 5 stars
4.5 out of 5
243 global ratings
How are ratings calculated?
To calculate the overall star rating and percentage breakdown by star, we don’t use a simple average. Instead, our system considers things like how recent a review is and if the reviewer bought the item on Amazon. It also analyzes reviews to verify trustworthiness.
Top reviews

esmith
1.0 out of 5 stars Amazing Author, Incompetent Kindle editing
Reviewed in the United States on June 23, 2019
Verified Purchase
I’m a huge fan of Wodehouse and rather keen on literature in general. The person(s) who put this Kindle edition together clearly view books as a nuisance to be endured as a means to extract dollars from unsuspecting fans who still think pages should come in order and that a narrative is best enjoyed starting at the beginning rather than, as this moribund team of orangutans devised, a shotgun of disconnected paragraphs. My suggestion for the next attempt is to hire folks who can read.
Read more
9 people found this helpful
Helpful
Report abuse

C. K. Conners
5.0 out of 5 stars I THOROUGHLY enjoyed Summer Lightning
Reviewed in the United States on September 10, 2017
Verified Purchase
If I could give this book more stars, I would. I THOROUGHLY enjoyed Summer Lightning. This is BY FAR one of P. G. Wodehouse's best works, and a great follow-up to my favorite Wodehouse piece, Leave It To Psmith. Wodehouse is one of the very few authors who can leave me laughing out loud, and this piece drew forth many such wonderful moments. Summer Lightning is a MUST-READ!
Read more
7 people found this helpful
Helpful
Report abuse

Carmen
5.0 out of 5 stars Balm for the soul in these chaotic times.
Reviewed in the United States on August 7, 2017
Verified Purchase
I LOVE P.G. WODEHOUSE STORIES! Years ago I obtained a bunch of his books and enjoyed them greatly. Now I am enjoying them on my kindle. No matter how bad the day was and how many people irritated me, a chapter or two of Wodehouse in the evening and the world is right again and I am laughing . . . . . .
Read more
5 people found this helpful
Helpful
Report abuse

Kindle Customer
1.0 out of 5 stars Problem with the download
Reviewed in the United States on February 28, 2019
Verified Purchase
The book is reading right to left. It also opened somewhere in the 2nd story. I tried to delete it from the device and reload it but it just loaded with the same issues.

It is strangely enough difficult to read comfortably moving backwards.

I'll fix the review if I can ever get it loaded properly.
Read more
2 people found this helpful
Helpful
Report abuse

Carey Tynan
5.0 out of 5 stars This on has it all
Reviewed in the United States on March 4, 2010
Verified Purchase
This is probably my favorite Blandings story. It has it all -
Lord Emsworth; his prize winning Black Berkshire pig, the Empress of Blandings; his secretary, the Efficient Baxter; the Honorable Galahad Threepwood (whose memoirs are the cause of all the excitement); Beach the Butler; and of course, an impostor and some star-crossed lovers.

From Wodehouse's preface to the book:
"A certain critic - for such men, I regret to say, do exist - made the nasty remark about my last novel that it contained `all the old Wodehouse characters under different names'. He has probably by now been eaten by bears, like the children who made mock of the prophet Elisha: but if he still survives he will not be able to make a similar charge against Summer Lightning. With my superior intelligence, I have outgeneralled the man this time by putting in all the old Wodehouse characters under the same names. Pretty silly it will make him feel, I rather fancy."

Marianna
5.0 out of 5 stars Very very good
Reviewed in the United States on December 16, 2020
Verified Purchase
What can I say - all Wodehouse is either very good or very very good. Great language, especially a native speaker can feel the nuances and appreciate them.
For no fault of the author I just wanted to be done and move on.
Read more
Helpful
Report abuse

AT
5.0 out of 5 stars As Expected
Reviewed in the United States on May 6, 2019
Verified Purchase
Classic Wodehouse. Go-to author for relief from the ugly world. I personally prefer the Bertie & Wooster series, but the Blandings books are much, much better than most other books one might pick up. This one is quite fun.
Read more
One person found this helpful
Helpful
Report abuse
See all reviews

S. J. Hawkins
3.0 out of 5 stars Odd use of paragraphs!
Reviewed in the United Kingdom on January 28, 2021
Verified Purchase
Never read any P G Wodehouse, but having enjoyed them on the radio (particularly Richard Briers) thought I would try one. He knows how to turn a phrase! But finding the plot a bit overdone - people almost randomly turning up to drive the thing forward. But more annoying than that is that I bought it on Kindle, and the transcribing of the book to that format hasn't been done particularly well. Most annoying is the randomness of the paragraphs. Stops it reading so well. On one occasion a '1' is used instead of an 'I'. And '/' used instead of ' ' .'It doesn't sound much, but it does get surprisingly irritating! I've read this complaint about other transfers of older books to Kindle. Not experienced it on anything else I have bought, but will put me off buying older books in this form in future.
Read more
Report abuse

Poldy
5.0 out of 5 stars The Price of the Papers
Reviewed in the United Kingdom on May 17, 2011
Verified Purchase
Summer Lightning, first published in 1929, was the third book in P. G. Wodehouse's Blandings saga, and the first to deal exclusively with the assortment of aristocratic eccentrics and oddities, and their employees and hangers-on who inhabit or, as Lord Emsworth might put it, infest, the place. The first novel in the sequence, Something Fresh, dealt primarily with life `below stairs', the only Wodehouse book so to do. The second, Leave it to Psmith, focuses primarily on this eminent buzzer and uses Lord Emsworth and the others mainly as background material. In Summer Lightning, however, Emsworth comes to the fore. As such, this is the first novel to mention his obsession with his prize-winning pig, Empress of Blandings, and therefore the first to have the theft of said porcine champion as a major plot point. This is also the first appearance of Lord Emsworth's younger brother Galahad Threepwood, he of the scandalous early life, and the sort of man for whom padded cells were invented.

Lord Emsworth's nephew Ronnie Fish needs money to marry his beloved, chorus girl Sue. But Lord Emsworth is his trustee, and he is unlikely to unloose the purse-strings to allow his nephew to marry a mere chorus girl, particularly when Ronnie's last financial venture was a night club which went bankrupt very quickly. Meanwhile, his former partner in this ill-starred venture, Hugo Carmody, is now working as Lord Emsworth's secretary, and is in love with Millicent, Lord Emsworth's niece. Sue herself is being sent flowers by Percy Pilbeam, who, in his capacity of private detective, takes up a place at Blandings. Sue has also been dancing with Hugo, and these two potential rivals cause Ronnie a great deal of jealousy. Add to the mix the Hon. Galahad's decision to write his salacious memoirs, and the inhabitants of Blandings and its environs are far from sleeping easy in their beds. Ronnie, in order to try to get his money out of Lord Emsworth, decides to steal his uncle's prize pig. Lord Emsworth's former secretary, the efficient Baxter, returns to the castle at the behest of his long-time champion, Lady Constance. With all these subplots and subterfuges going on, the scene is set for a classic Wodehouse farce.

As the title suggests, this is a light, summery book, which no lover of fine comic writing will want to miss.
Read more
14 people found this helpful
Report abuse

Tim
5.0 out of 5 stars P.G.Wodehouse - Summer Lightning read by Martin Jarvis
Reviewed in the United Kingdom on May 10, 2014
Verified Purchase
I have been reading P.G.Woehouse books for about 45 years. I had never read much of the Blandings Castle stories, but I enyoyed the recent T.V. series with Timothy Spaul and Jennifer Saunders as well as the 1966 production starring Ralph Richardson. I have much enjoyed this version read by Martin Jarvis. He manages to mimick the various characters' voices brilliantly Of course I remember seeing him playing Jon in the Forsyte Saga in 1966 or 1967, so he could act as indeed could the whole cast! The plot of Summer Lightning does become quite involved, so I think a second listen will be iron out some loose ends I have not listened to many talking books before, but I have recently had some sight problems and so I decided to give my eyes a rest! Finally, I gave this book five stars as I thought Martin Jarvis's reading was excellent and he really brought the characters alive. P.G. Wodehouse's prosaic style with its wonderful metaphors is always a pleasure to read or in this case listen to. All in all a very enjoyable experience.
Read more
Report abuse

MrsPSB1
5.0 out of 5 stars Funny
Reviewed in the United Kingdom on November 14, 2018
Verified Purchase
What a hoot, good escape from brexit
Read more
Report abuse

Dean John
5.0 out of 5 stars Timeless classic
Reviewed in the United Kingdom on November 2, 2017
Verified Purchase
One of the best, by the very best. Wodehouse , the best comic novelist in English literature. Probably read it 4 times by now.
Read more
Report abuse
See all reviews