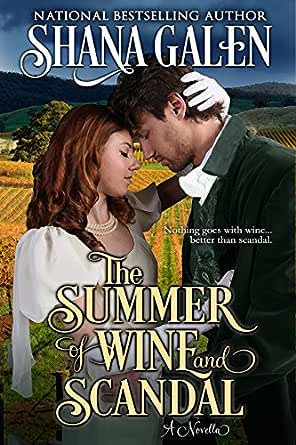 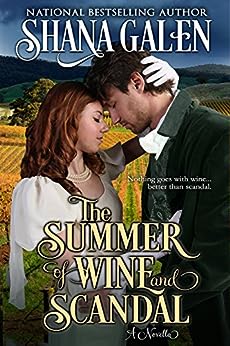 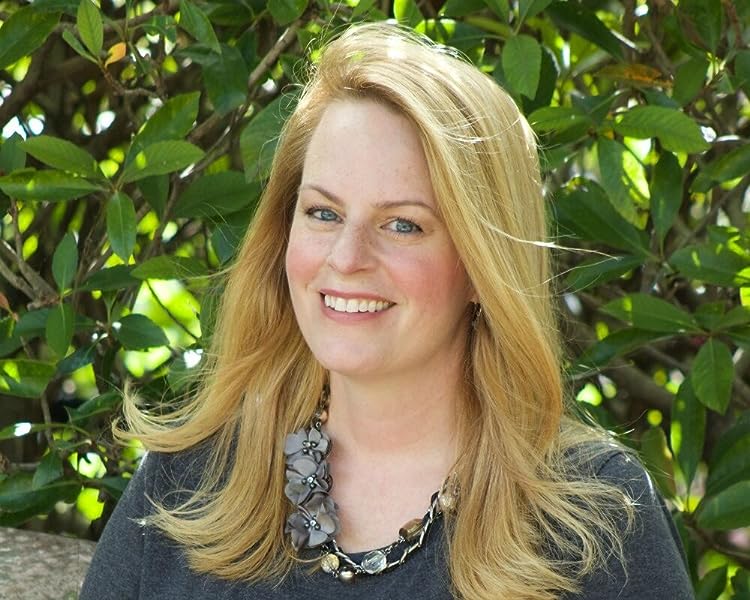 The Summer of Wine and Scandal Kindle Edition

Angie Mike
4.0 out of 5 stars THE SUMMER OF WINE AND SCANDAL: A Novella (A Gentleman For All Seasons #2)
Reviewed in the United States on April 19, 2018
Verified Purchase
THE SUMMER OF WINE AND SCANDAL was originally released in the "A Gentleman For All Seasons" anthology. Although it does standalone, it was the second of four stories that are connected by a brother and sister duo (The Gage's) who finish off the series (for lack of a better word) with the last two stories in the anthology. It looks like each of these novellas are now available for purchase separately, however, I think they will be more enjoyable if read in chronological order. And here is that reading order, for those who would like to know:

I really enjoyed this touching little novella, though at first I wasn't sure if I was going to like Lochley, who was a little too dandified and pompous for my taste. He did end up growing on me though, and then there was Caroline who my heart about broke for. She's still paying for a mistake made three years prior, and while her secret was not totally unexpected, it did have a twist I didn't see coming. And though the first half was good, I ended up loving the second half more and just thought it was lovely. The story does contain what I consider some serious subject matter, but doesn't have any actual sex scenes. There are instances with sexual references and undertones, but nothing detailed.

Overall this story was both well written and engaging, but I don't think everything was entirely believable. Still, it was such a poignant tale that I was willing to overlook any obstacles. The ending was absolutely beautiful and while it felt somewhat fairy-tale like, I was just so overjoyed to see this couple get the HEA they both deserved. For some inexplicable reason this was my first time reading anything by Shana Galen, although I have more than a dozen of her books. She's obviously very talented though and I look forward to more from her =)

She who shall remain nameless
3.0 out of 5 stars Out of the norm
Reviewed in the United States on July 25, 2019
Verified Purchase
This was an overall entertaining novella. I read it about a month ago and did not write a review right away because I couldn’t decide how I felt about it. The hero didn’t grab me in the beginning as a dandy, but he definitely came into his own as the story progressed. The heroine had made some tough decisions which I cannot say what I would have done in her position. I think that compassion should probably overrule judgement with this story. Not terribly lighthearted but still worth the read.
Read more
One person found this helpful
Helpful
Comment Report abuse

Reader Lady
5.0 out of 5 stars My Musings
Reviewed in the United States on April 30, 2018
Verified Purchase
I thoroughly enjoyed this delightful romance from the first page to the last. I always know I'm in for a treat when I read one of Shana Helen's lovely historicals. Her stories are unique well written with great pacing, witty dialogue and plenty of deep emotion. I highly recommend this excellent novella by this talented author. Happy ☺reading 📚!
Read more
One person found this helpful
Helpful
Comment Report abuse

TracyJane
4.0 out of 5 stars Very emotionally charged novella with possible trigger issues
Reviewed in the United States on June 4, 2019
Peregrine Lochley, the youngest son of Viscount Lochley meets Miss Caroline "Caro" Martin when she helps him free his carriage from the mud. Lochley feels awful for letting her do the work and impulsively invites her and her family to dinner. She asks if his hosts will mind and he assures her it will not be a problem, she is not so sure...

Caro has secrets, there is much speculation about the village about what happened to her 4 years ago after the town's fair, most people think she was sent away to give birth to a child, but the truth of her time away is much more heartbreaking. She is ruined and her family is avoided and have not been invited to any events since she returned. She knows that once Lochley learns of her scandal, the invitation to dinner will be recalled. But to her complete shock, it isn't! They go to dinner and she learns that Lochley is known for his ability to pick wine, in fact, he will be judging the wine tasting at the upcoming fair. An event that her family's vineyard will be entered in. When talk turns wine, Lochley goes to his room to retrieve a bottle and is shocked to find Caro wandering the halls, turns out the host's sister is a bit of a matchmaker and set them up, but Caro believes the worst of Lochley and thinks he is trying to seduce her and gives him an earful.

Days later their paths meet again and this time she helps him find his way back to his friend's estate, when they arrive, he kisses her and to her surprise, she likes it - too much. But this begins a friendship of sorts and he meets her again and again. Lochley is falling for her, but when a chance meeting in Tunbridge Wells has him learning the truth of her scandal, he is taken aback and is not sure he can accept the truth. It will take some wise words from his friend Gage and some soul searching, before he comes to a decision, but is it too late? Did his initial reaction hurt Caro too deeply for her to believe his feelings are sincere?

I thought this was a well written, fast paced novella about overcoming the past and learning to forgive yourself. It is filled with a lot of emotion, forgiveness, heartache, acceptance and sweet kisses. I liked Lochley and Caro, but I am not a big fan of the story's ending, if felt incomplete and a bit unfinished. Overall this was a good story and completely different than your typical Regency but be warned, there are some trigger issues (attempted rape, survivor shame) that might upset some readers.

*I am voluntarily leaving a review for an eBook that was provided to me.*
Read more
Helpful
Comment Report abuse

tlbran
5.0 out of 5 stars Sweet romance
Reviewed in the United States on May 19, 2019
This was such a sweet romance to read. It was a short book but the characters were well developed and the pacing was great. Caroline had made a bad decision three years prior that still affected her reputation. Caroline’s family supported and loved her even when it ruined their reputation also. I didn’t care for Lochley at first because he seemed so haughty but as I continued reading and learned more about him it was hard not to love him. He had made his own mistakes therefor he wouldn’t judge others. There was so many emotions in this story. I was sad at how Caroline was treated but also awed by her strength to withstand others opinions. I thought this story was unique because I haven’t read many were the heroine made this mistake and was then accepted back into the family home. This was a great book that was easy and fast to read.
Read more
Helpful
Comment Report abuse

Miriam K
3.0 out of 5 stars An engaging short story
Reviewed in the United States on June 1, 2019
This novella had me hooked from the beginning with a new take on the 'meet cute' trope. The characters were engaging, but I found the story a bit rushed due to the shorter length. It was a good read, though, and there are several secondary characters just begging for their own story. I recommend this novella for any fan of Shana Galen.
Read more
Helpful
Comment Report abuse
See all reviews