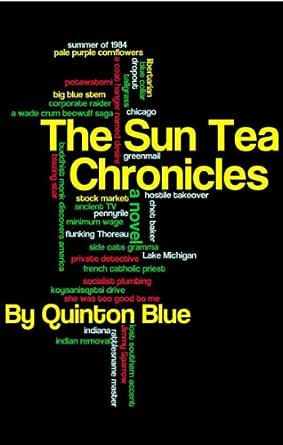 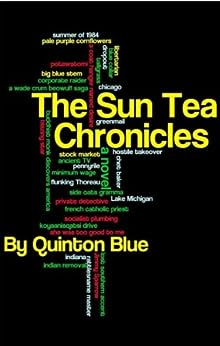 weebiscuit
4.0 out of 5 stars Just LOVED it! Such a refreshing change of pace!
Reviewed in the United States on March 16, 2017
Verified Purchase
I generally avoid any book with the word "Chronicles" in the title, as it's been so overused as to become trite. However, this one piqued my interest and I'm glad I took the plunge.

The story revolves upon a group of losers, actually. At least that's what we think they are at first, but as we get to know each person a little better, almost all of them seem to have at least one redeeming quality and by the end of the book they have become so very real, because of the great characterization employed by the author.

Jordan is a down-and-out young man who has lost two girlfriends and his job, and finds himself at a run-down apartment building in Indiana. The rent is $100 a month, so right away we know this place isn't home to any CEO's. (Of course since this was taking place in the early 1980's, I believe, rent would have been lower but certainly not $100 a month). The building is also home to two women; one who left her husband and children because she thought her kids would be better off without her. The other woman believes she is a great "artiste." She is also waiting around for predictions made by her "mahariji" guru to come true. Another man living there decides to try and run for Governor on the Libertarian ticket. And then there is Jimmy. He doesn't have a job, and sits outside his apartment on a lawn chair every day. He brews a jar of sun tea and sips it during the day, while he watches semis, cabs, and other vehicles pass in front of him. He reads very eclectic materials, and decides that he is doing the right thing... just sitting there and absorbing life.

The characters are a hoot, and the author has an incredible ability to write in a clever, humorous way, without condescending to foul language or anything lurid. There really is no "plot" to this story. Not really even much of any type of resolution at the end of it, but the astute reader will understand that just because there isn't any build-up to a plot that needs a resolution doesn't mean that this isn't a great story.

I enjoyed it quite a bit! Such a nice change when such an overwhelming number of books offered today are murder mysteries, full of graphic sex or disturbing violence. Instead, this is a study of people. But it is done in such a clever and amusing way that you really want to pull up a lawn chair and have a sip of that sun tea with Jordan and Jimmy.

I know that so many people who end up not liking a book claim that all the good reviews are written by friends and family of the author. I will unequivocably state that I don't have a clue who the author is. But I sure hope he keeps writing! The author is obviously very well-educated and writes so smoothly! And how many authors today would have even heard of Beowulf? Yet the author makes a clever reference to that work. And in reading this book, you'll also discover who REALLY discovered America! This author is the bomb!

The only reason I didn't give this 5 stars was because I was just a bit disappointed in the ending as it seemed to rather rush up on me. I'm not saying it was bad, but I guess I was expecting something different.

Cons about this book: There was one misplaced comma. (OK... that's meant to be humorous... In so many ebooks I've read the authors don't even understand how to construct a sentence, much less used commas. In this case, I don't even think it was the author's fault... probably just a typo).
Read more
Helpful
Report abuse

Eve's Folly
5.0 out of 5 stars Sweet Sadness and Profound Happiness
Reviewed in the United States on April 25, 2014
Verified Purchase
This book has a lot of comments like "funny. witty, good characters," but I say that's damning with faint praise. There was an undercurrent to this story that was intense and profound. It reminded me very, very much of Steinbeck's Cannery Row. Both books tell the tale of ordinary people going about their lives with equal parts humdrum, quirky, and traumatic happenings. And both books capture the thrumming undercurrent of precious mortality with all its foibles. Some of us have felt that peculiar moment when you stop and feel life rushing around you, realizing how short and precious it is even in its moments of mundanity or ridiculousness. Quinton Blue has put that feeling in most every scene of this book, making for a remarkably beautiful story.
Read more
Helpful
Report abuse

Bee's
5.0 out of 5 stars Unique and enjoyable read
Reviewed in the United States on June 29, 2012
Verified Purchase
Reading The Sun Tea Chronicles was a different experience for me. I've never read a book quite like it before. The story line is very laid back and quirky, a perfect reflection of the character who brews the sun tea. Unexpected twists kept it interesting, and many witty moments kept me entertained from the beginning to the end.
Read more
3 people found this helpful
Helpful
Report abuse

Lisa Williamson
5.0 out of 5 stars Truth and tea
Reviewed in the United States on July 9, 2012
Verified Purchase
This little tale moves sweetly from one story to another yet never leaves itself. The truths handed out in here are little thoughtful gems that we all need to learn. Enjoyable and more than worth the cost
Read more
One person found this helpful
Helpful
Report abuse

AQ
4.0 out of 5 stars great summer read
Reviewed in the United States on April 20, 2014
Verified Purchase
Not much plot, very character driven. That's ok though, because the characters are great. Funny and quirky. I hope to see more from this author.
Read more
Helpful
Report abuse

Leigh-Anne
5.0 out of 5 stars Suddenly craving sun tea...
Reviewed in the United States on April 17, 2014
Verified Purchase
Extremely well written, it draws the reader in. I enjoyed it and look forward to reading more of Quinton Blue!
Read more
Helpful
Report abuse

Donna Davis
4.0 out of 5 stars Full of unusual characters
Reviewed in the United States on May 14, 2013
Verified Purchase
Though I could not understand living in the way some of the characters did, I enjoyed reading about their (non) adventures.
Read more
Helpful
Report abuse

Theresa Haynes
5.0 out of 5 stars Quirky Story from the Drop-out World of South Bend
Reviewed in the United States on June 21, 2012
The Sun Tea Chronicles is a witty, comedic journey through the ironic lives of a half dozen misfits populating a run-down apartment building in South Bend, Indiana. The simplicity of their lighthearted friendship beguiles the gravity of their personal histories: abandonment, unemployment, divorce, alcoholism and mental illness. And yet, as their lives weave together, they establish the kind of healing community that only comes out of shared lives.

At times the novel is cartoonishly cheesy. The main character, Jordon, spends the first part of the book lamenting the double loss of his long term girlfriend Dawn and rebound girl Joy, and his subsequent inability to think about dishwashing soap without an emotional breakdown. But gently, without warning, the story transitions into the philosophical questions of life, spirituality, the Indian removal act and whether or not anyone could own the sky - not unlike the conversations you would expect from a couple of drop-outs sharing a jar of homebrewed tea in late summer.

I personally loved the story. After a few chapters I was completely engrossed in the character's lives and couldn't put the book down. I think it is a perfect lazy summer afternoon novel for the beach or the lake or even a six-month hiatus on a broken-down lawn chair parked in front of a Frank Lloyd Wright inspired apartment building somewhere in Indiana.
Read more
6 people found this helpful
Helpful
Report abuse
See all reviews