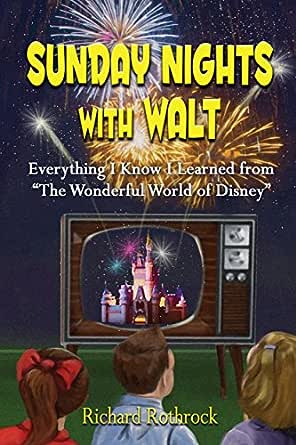 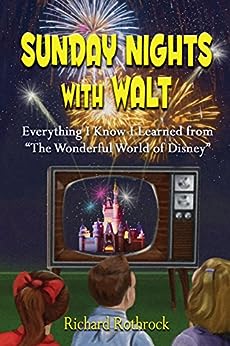 Sunday Nights with Walt: Everything I Know I Learned from "The Wonderful World of Disney" Kindle Edition

4.8 out of 5 stars
4.8 out of 5
16 customer ratings
How does Amazon calculate star ratings?
Amazon calculates a product’s star ratings based on a machine learned model instead of a raw data average. The model takes into account factors including the age of a rating, whether the ratings are from verified purchasers, and factors that establish reviewer trustworthiness.
Top reviews

M Moore
5.0 out of 5 stars That's My Ringtone & It's a Time Machine
Reviewed in the United States on June 8, 2020
Verified Purchase
I am about 15 years older than the author. When he talks about seeing the repeats of these shows, I had the pleasure of seeing them when they were shown originally. I remember Sunday nights, sitting on the floor in front of our RCA b&w TV, seeing and hearing those opening credits. Right now, I can picture my younger self, watching the shows with my legs crossed in front of me and resting my chin on my palms.
As a kid, there was no way my family could to get to Disneyland. I only knew two families who got there back then. One was a neighbor who took two weeks to drive to California from New York. This was in the late 1950s and this meant roads like Route 66, as the Interstates weren't completed for many more years. Then there was one grammar school classmate whose father was a pilot for TWA. He flew there! He was the first kid I knew who had been on a plane.
As a younger parent, I made several trips to Orlando. I am still making trips to Orlando and even added a few trips to Disneyland. The ring tone on my iPhone is the Sunday night theme music. Every time I hear that music, I am transported back to my spot in front of the TV, just like this book did, over and over.

Ray
4.0 out of 5 stars A Romp Through the Wonderful World of Disney
Reviewed in the United States on August 4, 2018
Verified Purchase
Overall a good book. For this of us that grew up watching the Disney show every Sunday night this good is a good summary of the favorites, at least for many of uu, and why we loved this show. The author spends a little too much time going into the minutiae of some of the plots and the “Commercial Breaks” where he talks about his family seemed unnecessary, at least to me. Other than that I found the book enjoyable. If you didn’t grow up watching the show I doubt you’ll get much out of this book. It may not be for you. But for those of us that did...you’ll like this book.
Read more
Helpful
Comment Report abuse

Kat
5.0 out of 5 stars Thanks for the memories.
Reviewed in the United States on January 3, 2018
Verified Purchase
Sometimes you're fortunate to run across a book that really turns out to be a time machine in disguise. I too grew up with Walt Disney at the helm of Sunday nights and this book brought back memories I thought disappeared when I grew up. A great ride into the Wonderful World of Disney. Thanks!
Read more
3 people found this helpful
Helpful
Comment Report abuse

Cynthia T.
5.0 out of 5 stars A fun, informative, intuitive trip down memory lane!
Reviewed in the United States on January 4, 2018
Verified Purchase
What a fun trip down memory lane! This was a great read written with warmth, clarity, humor and deep thought. Not only did reading this book churn up warm memories of my own, it also taught me many new things and is an excellent resource to refer to when I want to find those episodes that I missed. I bought extra copies and gave them away for Christmas gifts of which the recipients were wide-eyed and eager to read their in-hand time capsule..
Read more
3 people found this helpful
Helpful
Comment Report abuse

Felix Torres
5.0 out of 5 stars This book NO contains images or photos
Reviewed in the United States on November 7, 2018
Verified Purchase
Dislikes: this book is all about text and no images
It’s like a personal story, not official information or data
Like: a good story
Read more
Helpful
Comment Report abuse

Tom Obermyer
5.0 out of 5 stars Well Written
Reviewed in the United States on July 6, 2018
Verified Purchase
If you remember the Davy Crockett or The Swamp Fox or Ludwig Von Drake you will get a kick and some good memories from this book.
Read more
One person found this helpful
Helpful
Comment Report abuse