The Sundown Speech: An Amos Walker Novel and millions of other books are available for Amazon Kindle. Learn more 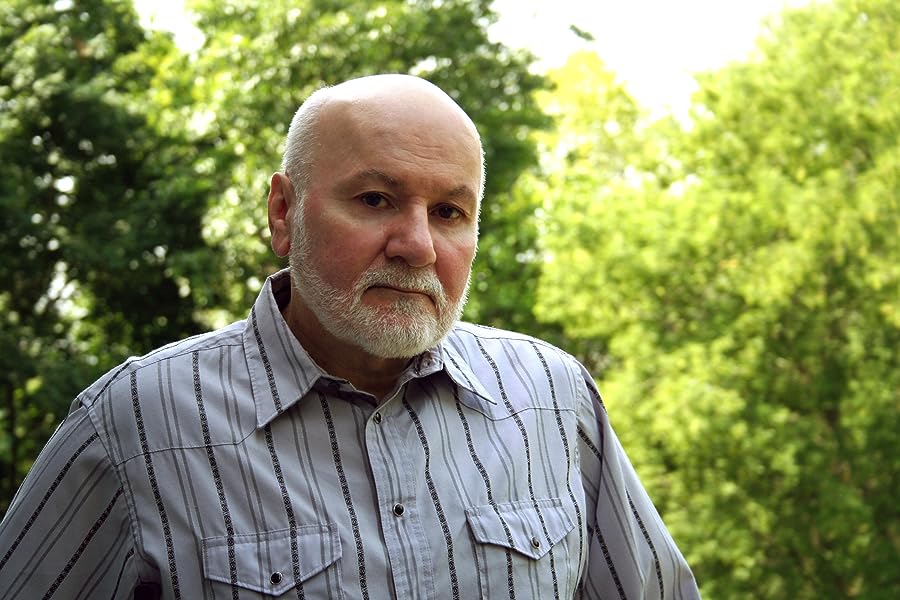 by Loren D. Estleman (Author)
4.3 out of 5 stars 33 ratings
Book 25 of 29: Amos Walker Novels
See all formats and editions
Sorry, there was a problem loading this page. Try again.

The Sundown Speech, a hot new Amos Walker mystery by Loren D. Estleman, the master of the hard-boiled detective novel.

Amos Walker is hired by Helen and Dante Gunner, a bohemian Ann Arbor couple, to find Jerry Marcus, a film director who has disappeared with their investment money. It's one of Walker's easiest jobs to date. In just a few short hours, Walker locates Marcus in his bedroom...murdered, his body shoved into a cupboard, a bullet through his head.

This case is opened and shut quickly, but Walker can't quite let it go. When Dante is arrested for the murder Walker finds himself again in Helen's employ, this time trying to prove that Dante didn't do it.

When Walker interviews Holly Zacharias, a college student who was the last person to see Marcus alive, things get interesting. Because if Marcus is dead, and Dante is his killer, then who is driving by in the Crown Vic, shooting at Walker and Holly?

Jerry Marcus just might still be alive, and his plans may be worse than anything Walker can imagine.

"The Body in the Dales" by J. R. Ellis
An unpopular victim. An impossible crime. A murderer on the loose. | Learn more

LOREN D. ESTLEMAN is author of more than seventy novels, including over twenty featuring Amos Walker (Don't Look For Me, The Sundown Speech and You Know Who Killed Me, among many others). Winner of four Shamus Awards, five Spur Awards and three Western Heritage Awards, he lives in Michigan with his wife, author Deborah Morgan.
Start reading The Sundown Speech on your Kindle in under a minute.

Loren D. Estleman graduated from Eastern Michigan University in 1974 with a Bachelor of Arts degree in English Literature and Journalism. In 2002, his alma mater presented him with an honorary doctorate in letters. He left the job market in 1980 to write full time, after a few years spent "pounding out beat-the-train journalism" during his day job as a reporter before going home and writing fiction at night.

His first novel was published in 1976, and has been followed by 80 books and hundreds of short stories and articles. His series include novels about Detroit detective Amos Walker, professional killer Peter Macklin, L.A. film detective and amateur sleuth Valentino, and the Detroit crime series. On the western side is the U.S. Deputy Marshal Page Murdock series. Additionally, he's written dozens of stand-alone novels.

His books have been translated into 27 languages and have won multiple Shamus, Spur, Western Heritage, and Stirrup awards. He has been nominated for the National Book Award and the Edgar Allan Poe Award. In 2012, the Western Writers of America honored him with the Lifetime Achievement Award.

He lives in Michigan and is married to writer Deborah Morgan. Find out more about Estleman and his books on his website: lorenestleman.com

WALT
5.0 out of 5 stars ANOTHER GREAT ONE, THIS SET IN ANN ARBOR
Reviewed in the United States on February 2, 2021
Verified Purchase
NO SPOILERS. THIS IS MY NEXT TO LAST, ONE MORE TO GO, OF REVIEWING THE AMOS WALKER SERIES. I RANK HIM AFTER
CHANDLER, HAMMETT, ROSS AND JOHN D. MACDONALD, HE IS SO WONDERFUL. THIS STORY IS A BIT OF A DEPARTURE AS IT TAKES PLACE IN THE ART CAPITAL OF ANN ARBOR, WHERE PEOPLE SAY HELLO TO EACH OTHER DAILY. AMOS IS HIRED TO FIND A
MAN WHO HAS SWINDLED MONEY FROM A COUPLE, AS WELL AS SEVERAL OTHER PEOPLE. NATURALLY, AS SOON AS HE FINDS A PLACE TO SLEEP, HE IS INVOLVED IN A MURDER, WHICH LEADS UP TO A VERY BREATHTAKING ENCOUNTER WITH A MAD BOMBER. HE OF COURSE HAS HIS USUAL TROUBLES WITH THE POLICE. WHAT IS SO GREAT ABOUT AMOS WALKER IS HIS THROW AWAY ONE
LINERS AND METAPHORS , ESTLEMAN HAS A WICKED SENSE OF HUMOR AND PASSES IT ON TO AMOS. YOU MAY BEGIN THE
SERIES WITH THIS OR ANY BOOK, INCLUDING NUMBER ONE. THE OLDER ONES ARE SOLD AT A GREAT PRICE BY AMAZON.
IF YOU LIKED MY REVIEW PLEASE CLICK ON THE HELPFUL BOX
Read more
Helpful
Report abuse

George Gaines
3.0 out of 5 stars Time for a chane
Reviewed in the United States on April 15, 2021
Verified Purchase
I have been a follower of this writer for a long time, but this one wasn’t a fun read.
This dialogue was witty as usual but story was choppy and semi boring.
He’s good, but maybe it was me. No more! At least for now.
Read more
Helpful
Report abuse

M. Sexton
5.0 out of 5 stars Another great Amos Walker mystery!
Reviewed in the United States on March 6, 2017
Verified Purchase
Another good read from Estleman. His private eye, Amos Walker, has remained a very interesting and appealing protagonist, and there are always plenty of plot twists in his stories to keep your interest. Another good plot in this hard boiled mystery, with plenty of surprises. A very good read! Recommended for all Amos Walker fans!
Read more
2 people found this helpful
Helpful
Report abuse

T. Wagner
3.0 out of 5 stars Subpar for Estleman
Reviewed in the United States on February 14, 2017
Verified Purchase
I'm a big fan of Estleman but this was not as good as many others in the Amos Walker series. Apparently this is a serialized novel from some years ago and turned into a book. The mystery wasn't up to par. The motivation for the killing seemed a bit of a stretch.
Read more
One person found this helpful
Helpful
Report abuse

Kathy K
4.0 out of 5 stars Estleman is one of the best.
Reviewed in the United States on February 12, 2020
Verified Purchase
I have copies of all the Amos Walker Series by Loren D. Estleman. He writes the hard boiled detective better than any current writer.
Read more
Helpful
Report abuse

Ron Head
5.0 out of 5 stars Never Fails to Deliver
Reviewed in the United States on June 15, 2016
Verified Purchase
Loren D. Estleman and Amos Walker never fail to deliver. I have read all of the Amos Walker novels and short stories. Estleman's writing style is right up there with the best, namely Raymond Chandler. I look forward to every novel and cannot wait until the next one.
Read more
One person found this helpful
Helpful
Report abuse

Bob Manning
4.0 out of 5 stars Amos Walker - Marlowe of the Motor City...
Reviewed in the United States on December 9, 2015
Verified Purchase
The phone rang while I was busy on a case; that's to say, I was busy searching my desk for the bottle of Scotch that until yesterday was in the bottom drawer of my desk but had now mysteriously disappeared. No doubt the cleaning crew, in a fit of safety-consciousness, had removed it as a hazard.

“Yeah?” I growled, after spearing the receiver on the second ring.The caller identified himself and I relaxed.

“Sorry,” I said, “I was overdue for my daily cold-call from the Church of The Eviscerated Wallet.”

My caller, a well-known, syndicated jounalist who bought his shoes one at a time, laughed on his end of the line.

“What is it about you P.I.s and your aphorisms? Walker's like that all the time - can barely function without a cynical wisecrack.”

“We all get hit on the head with the Collected Works of Chandler at some point,” I told him, not looking at the leather-bound tome on top of the filing cabinet. Sometimes I use it for inspiration, sometimes for a paperweight – Chandler is multi-purpose.

“But speaking of Walker – what's he been up to lately?” I asked, not having heard from my friend in a while.

“Don't tell me – the movie guy vanished with the money and the investors didn't want to involve the police.”

“Something like that. And get this – Walker finds the guy in a day, a bullet in his head and no sign of the money.”

“The husband of the couple who hired Walker. Simple enough, yeah?”

“Knowing Amos, probably not,” I suggested. Another laugh at the end of the phone.

“The guy's wife and attorney hire him a second time to prove the husband's innocence, and while Walker's out doing his thing, someone takes a shot at him – while the suspect's still in a cell.”

“Sounds like the husband was set up,” I mused. “Walker get hit?” I was a little concerned, given his recent past – lately he seemed to attract bullets like an electromagnet.

“No, he's fine – I don't even think anyone had to bail him out of a hospital this time.”

“That's a first – how's he doing with the Vicodin thing?”

“No mention of it to me – and you know, when he gave me the story, there was a clarity in the details that reminded me of some of his early cases. Like he went out into sunlight for once, I don't know how to describe it.”

“And you a prize-winning journalist? For shame,” I laughed, shifting in my chair.

My foot caught something under the desk and it fell over with a bottle-falling-over sound.

“In any case, I'm not worried about the guy,” said the reporter, “it seems like he's back on form, so no doubt he'll be back in trouble in short order.”

I didn't doubt it. It was good to know Walker was back; there's not many guys like us left, and fewer like him. I said goodbye to the reporter and hung up. It hadn't occurred to either of us to ask why he'd called.

I reached under the desk and retrieved the bottle I had kicked over. Looked like I'd misjudged the cleaner after all.

I poured a shot and held the glass up to the light, watching the golden liquid swirl gently. Offering a silent toast to the gods of distant friends and orphan P.I.s, I knocked it back, then grabbed my hat and headed out into the night.
Read more
4 people found this helpful
Helpful
Report abuse

em
3.0 out of 5 stars I had so looked forward to a new Estleman, but oh well...
Reviewed in the United States on October 24, 2017
Verified Purchase
Didn't find it as intriguing as his other books I've read perhaps I would have were I from Ann Arbor.
Read more
Helpful
Report abuse
See all reviews