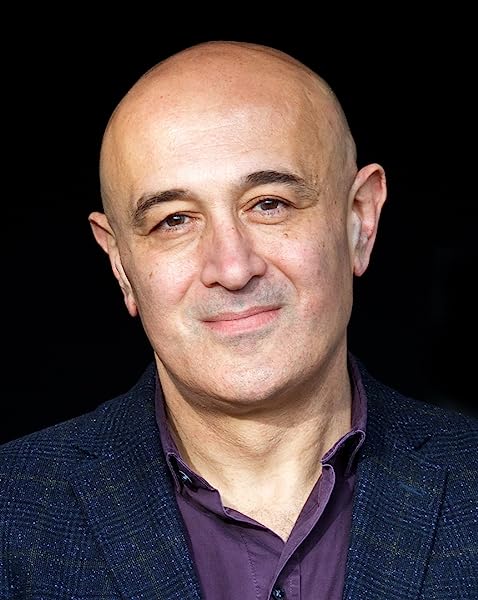 by Jim Al-Khalili (Author)
4.2 out of 5 stars 354 ratings
See all formats and editions
Sorry, there was a problem loading this page. Try again.

2041 and the world as we know it grinds to a halt. Our planet seems to be turning against itself - it would appear that the magnetic field, that protects life on Earth from deadly radiation from space, is failing . . .

Desperate to quell the mass hysteria that would surely follow, world governments have concealed this rapidly emerging Armageddon. But a young Iranian hacktivist stumbles across the truth, and it becomes a race against time to reactivate the earth's core using beams of dark matter.

As a small team of brave and brilliant scientists battle to find a way of transforming theory into practice, they face a fanatical group intent on pursuing their own endgame agenda: for they believe mankind to be a plague upon this earth and will do anything, commit any crime, to ensure that the project fails . . .

And so bring about humanity's end.
Read more
Previous page
Next page

Jim Al-Khalili CBE FRS is a quantum physicist, author and broadcaster and one of the best-known science communicators in Britain. He holds a Distinguished Chair in Physics at the University of Surrey where he teaches and conducts his research. He received a PhD in nuclear theory in 1989 and has since published over 100 research papers. He has written twelve books on popular science, between them translated into over twenty-six languages, as well as his first novel, Sunfall. He is a regular presenter of TV science documentaries and the long-running Radio 4 programme, The Life Scientific. He is a recipient of the Royal Society Faraday medal, the Institute of Physics Kelvin Medal and the Stephen Hawking Medal. His latest book, The World According to Physics, was published in 2020 by Princeton University Press. His new book, The Joy of Science, in out in Spring 2022.

Paul Whipp
3.0 out of 5 stars Flawed but fascinating
Reviewed in the United States 🇺🇸 on May 11, 2019
Verified Purchase
Fascinating science and storyline marred by thin characters.
Read more
One person found this helpful
Helpful
Report abuse
See all reviews

J. McMurchie
2.0 out of 5 stars Better writing needed
Reviewed in the United Kingdom 🇬🇧 on April 23, 2019
Verified Purchase
I wanted to love this book. I’m a big sci-fi fan and a big fan of the author. Sadly being a great physicist with lots of ideas does not make you a great writer. Some good tech stuff and I enjoyed the science but this book contains every cliche you can think of, plus some terrible prose. Dialogue used mainly, and too obviously, to explain the science. Since when do actual people speak to each other like this? I say Jim has been let down by his editor.
Read more
27 people found this helpful
Report abuse

Andrew Ross
5.0 out of 5 stars A ripping yarn, told to a proven formula
Reviewed in the United Kingdom 🇬🇧 on May 28, 2019
Verified Purchase
Professor Jim Al-Khalili, OBE, FRS, is man who may need no introduction, given his frequent television shows on physics and his engaging public presence. His novel is a new departure for him, and an impressive debut in a challenging format. Regardless of his own identity, this book rips along as well as any science-fiction thriller and delivers an overall punch that will delight any fan of the genre.
As a personal disclosure of interest, I share with him a deep interest in quantum physics and astrophysics stretching back for years, as well as a fascination with issues in quantum biology, where he did good work in collaboration with Johnjoe McFadden, with whom I too had discussed a collaboration. Not only that, I too published a science-fiction thriller, albeit a quarter-century earlier, and in my case a flop, for which I bear the blame. With all that in common, I read Jim’s novel (if I may presume to call him Jim) with more than usual interest.
The scenario for Sunfall is simple and compelling. The Earth’s magnetic field flickers and fades, deadly radiation and particles in the solar wind reach the Earth’s surface, and life on Earth is endangered. Given our thin understanding of how the planet’s protective field is generated and maintained, and why it regularly flips its polarity over geological time, the scenario is plausible. Jim’s intimate acquaintance with the scientific community now kicks in to create a series of realistic vignettes of young scientists reacting to the challenge and struggling to come up with an effective response.
Without wishing to spoil the plot, I can reveal that the response involves dark matter, which Jim conceives as consisting largely of neutralinos, as introduced within the ambitious but disputed theory of supersymmetry. All this is fair game in science fiction, of course, and Jim does not burden the reader with more theoretical details than he needs to keep the plot humming along. Beside this key thread, Jim has filled a tale set in the year 2041 with as informed a series of technology predictions as anyone could make, starting from 2019. Here his story really shines. I know how hard it is to predict what technology will have achieved widespread deployment a couple of decades hence, but Jim has made a brave go of it and made most of his bets seem reasonable.
Inevitably, some readers will baulk at some of the suspensions of disbelief required to follow the plot. Whether adoption of augmented reality (AR) in retinal implants will seem normal so soon into the future leaves me agnostic, and I suspect the planetwide network of artificial Intelligence (AI) required to leverage it to the levels Jim imagines will still seem utopian (if not dystopian) in 2041, but again in a novel this is normal enough. What finally prompted me as a reader to utter a loud “Bulls**t!” I dare not reveal in detail, but let me say it involved quantum entanglement, where Jim has definitely sailed too close to the wind, in defiance of Einstein and others.
As for the mechanics of the novel, with its supporting cast of standard-issue characters and its ample supply of formulaic plot moves, Jim has clearly taken plenty of advice from his team of editors and helpers in the publishing team. This has paid off well in the sense that the structure is a classic exponential countdown to a dramatic climax, but it has the downside that toward the end it all becomes as predictable as a children’s pantomime. This is no shame, however, and will certainly pay off when a production team gets to work to transpose all this into a major motion picture. Jim has worked enough quirky and realistic details into his characters and their adventures to put his unique fingerprint on the final product, and nothing his editors could do would rescue his authentically clunky prose, but if you agree that good science trumps literary finesse then Sunfall is worth reading.

old man and the sea
3.0 out of 5 stars Nice Speculative Fiction thriller - story 8/10; writing 6/10
Reviewed in the United Kingdom 🇬🇧 on May 18, 2019
Verified Purchase
There's a lot to enjoy here. The plot and the pacing are excellent. There's a mixture of science-fact and science-fiction; the former gives a gloss of reality to the latter. The central conceit, of the Earth's magnetosphere failing, is quite scary - is that what killed Mars? The dark matter solution was perhaps far-fetched, but provided a lot of fun. For a first novel, written while busy working in real science and in science broadcasting, the narrative style isn't too bad. It would be better if there were more show than tell. I hope the author continues writing and is open to learning more about the creative medium.
Read more
7 people found this helpful
Report abuse

ChrisG
3.0 out of 5 stars Badly written characters but interesting ideas
Reviewed in the United Kingdom 🇬🇧 on October 11, 2019
Verified Purchase
I like Jim Al Khalil and his presentations of physics on TV and I really wanted to like this book but I am struggling to read it, it so poorly written and characterised...and the people in it are getting more implausible by the second. I’m an avid scI fi reader, when I can find something literate. I can see the author has ideas he wants to express, but he cannot write people! I hope I can finish this but I’m not sure I’ll get through it.(in fact I did finish it but it was a bit of a slog and I skipped bits.) But three cheers for having female heroes! So 3 stars for that and the science, even if the main female protagonist has suddenly lost all sense of self preservation...At one point, the authors shows how well he can write when describing the love of mathematics, and it is a beautiful passage. Perhaps more science and robots not humans in next novel?
Read more
4 people found this helpful
Report abuse

Jason
4.0 out of 5 stars A very good first novel from the Professor, but not perfect
Reviewed in the United Kingdom 🇬🇧 on June 9, 2020
Verified Purchase
Overall, I enjoyed Jim Khalili's first novel. It was a well written and enjoyable sci-fi romp in the near future. However, I couldn't quite give it 5 stars because I felt it dragged and wilted a bit towards the end, specifically the final third. The first part, the impending doom, was great, with plenty of tension and build-up (but this part was much too short). Thereafter, it felt a bit predictable with the scientists conveniently discovering a solution (which doesn't exist in real life - yet!), and the anarchists doing their best to prevent its use and thus doom Earth to destruction. If I'm honest, that's not an original plot and although it was ultimately a fun read, it didn't blow me away.

However, having said that, I still enjoyed the novel and I'm looking forward to his next one (perhaps with a slightly more original plot, as "end of the world" stories are nothing new).
Read more
Report abuse
See all reviews