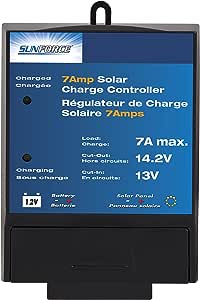 The Sunforce 60012 7 Amp Charge Controller prevents overcharging and discharging of 12 Volt batteries. It is intended for use with 12 Volt solar panels and maintains 12 Volt batteries in a fully charged state. It can handle up to 7 amps of array current and up to 105 watts of solar power. The controller is easy to use with a yellow charging light that indicates that your battery is charging, and a green light that indicates a fully charged battery.

About the Charge Controller

The Sunforce 7 Amp, 12 Volt Charge Controller will prevent overcharging your 12 volt batteries when charging with a 12 volt solar system.

It is recommended to consider the power capacity of your solar system in order to choose the right charge controller.

It's important to choose the proper wire gauge (thickness) based on your solar system's capacity and installation distance.

*Note: Solar Panel and Battery are not included.

4.5 out of 5 stars
4.5 out of 5
444 global ratings
How are ratings calculated?
To calculate the overall star rating and percentage breakdown by star, we don’t use a simple average. Instead, our system considers things like how recent a review is and if the reviewer bought the item on Amazon. It also analyzes reviews to verify trustworthiness.

Maynard the Miser
1.0 out of 5 stars Doesn't charge batteries fully
Reviewed in the United States on November 17, 2013
Verified Purchase
I bought one of these in 2007 and used it to charge the two deep cycle batteries in my truck camper for two years before I knew any better. Solar charging was new to me and this was cheap so I figured I would give it a go. It appeared to work fine - it showed it was charging. But my batteries never seemed to last long. I set out to find out why, and in the process learned a lot about solar charging. Along with that education came a realization of the pitfalls of charge controllers like this one.

This is an "on/off" controller. When your batteries reach 14.2 volts, it simply turns off. Your batteries will then discharge, either from something running off of them or simply by the passage of time (self discharge). Once they reach 13 volts, this controller turns on again and takes them back up to 14.2 volts, and the cycle repeats itself.

The problem is your 12v batteries are not fully charged when they reach 14.2 volts. Deep cycle batteries, especially, need more than that. Many are rated to be charged at 14.4v, some as high as 14.8v (many 6v pairs, wired in series, fall into this latter category). And when they reach that voltage they should continue to be charged at a gradually reduced current until they are truly full. When that doesn't happen they are chronically undercharged, which doesn't give you the full use of the battery's capacity. It's like having a ten gallon gas tank in your car but never putting more than 7 or 8 gallons in it. The result is you can't use as much electricity before needing to recharge again. Worse yet, chronic undercharging shortens battery life. Sulfation of the plates occurs, as well as stratification of the electrolyte fluid. Individual battery cell charges drift apart, and eventually cell failure occurs. It only takes one cell to fail and your battery becomes nothing more than a toxic lead weight.

Look for charge controllers that use PWM (Pulse Width Modulation) technology or MPPT (Maximum Power Point Tracking). MPPT is expensive and not really financially feasible for many small solar systems, but there are many PWM controllers on the market these days that are nearly as inexpensive as this cheap Sunforce on/off model.

Renogy is one brand that is sold here on Amazon. The ten amp model uses PWM and even includes in-unit temperature compensation, but it is about ten bucks more than this Sunforce model. Even so, you'd likely save more than that in battery life. It's got its faults too though, like a short 30-minute absorption mode. If you really want a good one, look for Morningstar, Blue Sky, Rogue or Xantrex, to name a few. I've also heard good things about a very cheap Chinese brand called Landstar. Although most of these are quite a bit more expensive, they won't cut your battery life short and they will give you more battery capacity to work with. To learn more about 12v solar charging see rvsolar101 dot blogspot dot com. Part 7 covers charge controllers.

The Suburban Experimentalist
VINE VOICE
5.0 out of 5 stars I used the first one for 10 years
Reviewed in the United States on October 15, 2019
Verified Purchase
Okay, I am not going to get into if this is the best, but I have used this device to keep my marine batteries charged for the last 10 years. One battery, is the camper battery, and the other is for pellet stove backup.

Some say you should charge your marine batteries to 14.4 volts to keep them from sulfating. This device switches off at 13.4 volts. I might of gotten the other kind, which is PWM and 14.4 volts, but many say the devices I was looking at do not cut off, and cook your batteries.

I have experience with this, and the one battery is 10 years old, so I don't think it is hurting anything.. Of course, I don't use either battery often, but I will tell you I have had no problem with my camper battery...
Read more
One person found this helpful
Helpful
Report abuse

Jan 2016:
Dropping to 1 star. The unit is dead. I'm not sure exactly when it died but I was running a generator exercise the other day and noticed it's no longer charging the battery. Granted it was cheap enough but I do have an expectation of not having to replace it yearly.

Jul 2016:
I removed this charge controller and hooked up the 5w solar panel directly to the battery. It shouldn't be enough to over charge the battery but I was afraid the failure in the charge controller would discharge / drain the battery
Read more
3 people found this helpful
Helpful
Report abuse

Chris
3.0 out of 5 stars Control the power of the sun...kind of
Reviewed in the United States on November 22, 2015
Verified Purchase
This Is A very very basic charge controller it has a led that either tells you its charging or one that says its charged. and it goes back and fourth once the battery is full
The wire it comes with is smaller than the wire coming from the back of the solar panel. im sorry I don't know the sizes
Wires are self explanatory red+ black- and are very short
NO DIRECTIONS however it is pretty basic and if you need these directions you should call a electrician maybe even look on the youtube
NO LOAD setup/hook...up power is wasted
made in china, you get what you pay for, I bought this because it was purchased by other customers who also bought the solar panel I bought...
Now I know better than to listen to them guys.
I would Not buy this again, I would try to find something with a digital readout
It Does do the job it is intended to do, its mountable in a lightweight housing and all of its lights work...both of them, helps save power
Read more
One person found this helpful
Helpful
Report abuse

WardnTX
2.0 out of 5 stars I thought that was nice. About an hour or two later
Reviewed in the United States on December 8, 2014
Verified Purchase
I don't trust this controller at all. I hooked up the battery first per instructions. Then connected the controller. The charging lite came on, I thought that was nice. About an hour or two later, the green light was on that said charged. BUT, so was the yellow charging lite.
3 hours later when I went to power on the yellow led flasher, the battery was so dead it would not even trip the photo cell attached to the lights.
It was working before I connected this because I checked it by covering the photo cell. So this thing definitely drained the battery. I have never had a problem with this when I had 3 small 1.5 w chargers connected to it.I added this and a 7 watt charger to save room.
I ordered 2, another for a 10 watt panel. I am returning both of these and bought 2 of these.
http://www.amazon.com/gp/product/B002GIWMJG/ref=oh_aui_detailpage_o00_s00?ie=UTF8&psc=1

They appear to have better features and 3 leads. One for the panel, one for the batter and one for the device. This might be a better thing. This switches to float charge as well.
Read more
Helpful
Report abuse
See all reviews

Doug
5.0 out of 5 stars Good little unit!
Reviewed in Canada on June 15, 2017
Verified Purchase
This is a good little unit. I have it connected to a solar panel that maintains the battery charge in my Ford 3000 farm tractor. Prior to installing it, I became concerned that the solar panel might be overcharging my tractor battery, especially if the tractor was not used for a few days. After installing the charge controller, my concerns were verified. Initially the yellow light confirmed that the battery was charging, but within a few hours the green light came on indicating that the battery was at full charge and the current from the solar panel had been shut off. I have it in continuous use, and so far it is doing the job reliably.
Read more
Report abuse

Chris
5.0 out of 5 stars Good controller for the money
Reviewed in Canada on December 13, 2020
Verified Purchase
Nice controller,very simple. I have it hooked up to a 20watt panel, charging up one deep cycle battery. It keeps my battery topped up and ready to use.
Read more
Report abuse

Amazon Customer
5.0 out of 5 stars As advertised
Reviewed in Canada on July 13, 2020
Verified Purchase
I bought a 30 A from a brand I didn't know and it blown out. I bought two of those. They didn't blow out !

Amazon Customer
4.0 out of 5 stars does not come with alligator clips
Reviewed in Canada on July 15, 2020
Verified Purchase
was expecting alligator clips had to install them myself.and make sure you follow, positive leads together and negative leads together other wise works great and a very good price.
Read more
Report abuse
See all reviews
Pages with related products. See and discover other items: cheap solar lights, solar panel accessories, solar panel car