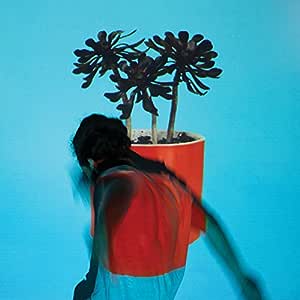 Local Natives Format: Audio CD
4.4 out of 5 stars 87 ratings
See all 6 formats and editions Hide other formats and editions
Includes FREE MP3 version of this album.&nbspProvided by Amazon Digital Services LLC. Terms and Conditions. Does not apply to gift orders.&nbspComplete your purchase to save the MP3 version to your music library.
Available at a lower price from other sellers that may not offer free Prime shipping.

The kick-start album-opener "Villainy" signifies the band's unbridled new energy and huge ambitions. It feels like a nice wrapping-up of this trilogy of who they are: these Southern California kids who grew up feeling like the world was this endless possibility. Looking back upon their own youths yet constantly moving forward to the future, Local Natives have embraced their evolution and made what could be seen as the most Local Natives-sounding album of their young careers.

4.4 out of 5 stars
4.4 out of 5
87 global ratings
How are ratings calculated?
To calculate the overall star rating and percentage breakdown by star, we don’t use a simple average. Instead, our system considers things like how recent a review is and if the reviewer bought the item on Amazon. It also analyzes reviews to verify trustworthiness.
Top reviews

Marc
5.0 out of 5 stars Best album I've heard in a long, long time
Reviewed in the United States on September 13, 2016
Verified Purchase
I think this is my first Amazon review ever - this was so good I had to tell the world.

This album is amazing. Every song in the first two-thirds of the album is tremendous (the last third is complete adequate, but just not quite the same). Taylor and Kelcie really show off their vocals and you can tell there was great attention to detail put into composing these. This has the atmospheric sound of Hummingbird, but with the energy and catchiness of Gorilla Manor.

With that said, I think they've hit new ground here. This music doesn't really remind me of any other band, including themselves in their first two albums. It's like you take the energy and pulse of Arcade Fire's Reflector album and blend it with the vocals and folk of Fleet Foxes.

CDSTop Contributor: Pets
5.0 out of 5 stars I play this for my crying baby and it stops her crying and puts her to sleep.
Reviewed in the United States on November 19, 2016
Verified Purchase
While my 4 month old was crying at the top of her lungs, I decided to blast "Past Lives" and rock her to sleep. It automatically got her to stop crying. Now it's been 2 months and this is my go-to to get her to stop fussing and sleep. That's what I love about Local Natives-- every album I have of theirs (the last 3) I can play every song when I'm in a relaxed mood and most of the tracks I really like. It's really chill and my favorites on this album are "Past Lives" and "Pscyho Lovers". Also, I bought the CD and was afraid I'd be buying another plastic item I'd have to throw away, but was happy to find that the case is all cardboard and has one card for every song which includes the lyrics. Great packaging for a CD.
Read more
Helpful
Comment Report abuse

Music Fan
4.0 out of 5 stars A satisfying, yet safe, release
Reviewed in the United States on September 23, 2016
Verified Purchase
Local Natives’ third album, Sunlit Youth, is a safe return for the band in comparison to its prior albums. At points it yearns to return to those days of little responsibility and unabashed, creative songwriting as heard on Gorilla Manor -- when hooks didn't matter because bills didn't matter. But now bills do matter to Local Natives as they grow older, and so hooks are abundantly interlaced with the soaring vocals they are known for, while still maintaining some of the brooding elements from their second album, Hummingbird.

Because of this focus on hooks, all of these tracks are much more straight forward in terms of song structure than Local Natives's previous music. Therefore, the differentiation in tracks come from how each track utilizes a unique combination of textures, especially in its combination of digital and analog (i.e. "traditional rock band") timbres. In other words, some tracks focus on a digital instrumentation verse + digital instrumentation chorus, some feature a digital verse + analog chorus, and so forth. Meanwhile, they are able to tie these differing textures via their unifying vocal melodies/harmonies throughout each track. It really helps to create an album where you never feel as if any of the songs blend together. Also, because of this unique combination of textures on each track, each person who listens to the full album is likely to have a different set of favorite songs.

That being said, from a critical perspective, there are some shortcomings with this album. The EQ seems to be off on the first couple tracks, and as a result, the lead vocals’ lyrics can be difficult to discern at times. It's a problem common nowadays with reverb-drenched vocals. They get lost in the mix, especially when the mix is as layered as it is here.

Furthermore, I miss the narrative lyrics as heard on their first two albums. The first two albums' lyrics was one of the main draws of their success thus far, as found in their ability to take the mundane, such as being stuck in traffic on a freeway while listening to the news on the radio (see "World News" from Gorilla Manor), and amplify it into a magnificent experience via soaring vocal melodies/harmonies and creative compositions. Meanwhile, with Sunlit Youth, they often focus on capturing a specific mood/feeling through an emphasis on instrumentation and cryptic lyrics -- and unfortunately so. The compelling playfulness and storytelling of their old lyrics is missing in this new songwriting.

And so, it's clear that this isn't a 5-star album. 5 stars is an album I recommend to all friends, regardless of genre or known tastes. And as much as I wish I could, I can’t say that Local Natives hit that mark with Sunlit Youth for the reasons stated above. That being said, even a couple weeks after buying this album, I still keep coming back to re-listen. Therefore, 4 stars is appropriate. This album isn't even near perfect, but it's still satisfying to listen to for previous fans of Local Natives, or people who just like the current trends within (indie) rock music.

Albert Armea
3.0 out of 5 stars LP skips throughout the album
Reviewed in the United States on October 6, 2017
Verified Purchase
Album itself: 5/5
Vinyl edition: 0/5

Love the album, but my vinyl copy skips a *ton*. I'll be avoiding vinyl cut by these guys in the future - it seems they tried to fit too much content on a single LP, making it more likely for the needle to jump.

Karen
5.0 out of 5 stars Beautiful
Reviewed in the United States on December 13, 2019
Verified Purchase
This album is spiritual. All the songs are all different(in a unique way) and so special.... So colourful.
Read more
Helpful
Comment Report abuse

Sammy Eang
5.0 out of 5 stars Unskippable
Reviewed in the United States on February 10, 2017
Verified Purchase
Honestly the whole album is solid. There's only one song I didn't favor so much (I think it was Jellyfish), but every other song is unskippable when flipping through my playlist on shuffle. Better than Hummingbird overall and on par with Gorilla Manor. Pretty much a must have if you like Local Natives.
Read more
Helpful
Comment Report abuse

Matthew M. Sanchez
5.0 out of 5 stars Great piece or music.
Reviewed in the United States on August 24, 2017
Verified Purchase
I was big fan or Local Natives before I purchased this Album, needless to say, I am completely sold on them now. This album is excellent top to bottom; I highly recommend it.
Read more
One person found this helpful
Helpful
Comment Report abuse

J Thorp
5.0 out of 5 stars Perfect
Reviewed in the United Kingdom on June 25, 2017
Verified Purchase
A perfect album - not a single mediocre song. Very summery and Californian - at the risk of stating the obvious. Saw them live in Liverpool and they were fantastic too.
Read more
Report abuse

Amazon Customer
5.0 out of 5 stars Holy crap!
Reviewed in Canada on February 16, 2018
Verified Purchase
OMG I was really not expecting such an amazing package for such a low price. I actually feel bad that these guys put so much work into this thing to have it sold for so cheap! Clear vinyl! Unusual box that contains the LP with picture sleeve, plus a whole pile of cardstock posters, and a separate cardstock lyric sheet. To top it all off, the cover of the box has some kind of direct-sunlight-activated invisible ink! Have to wait for the summer to try it out, but how cool is that! The album itself is really good; I've been binging it digitally for the last year or so anyway and some of the songs are the kind you never get sick of. Easy 5/5 on this record, and the crazy nice package is just a really, really nice bonus. Well worth purchasing!
Read more
Report abuse