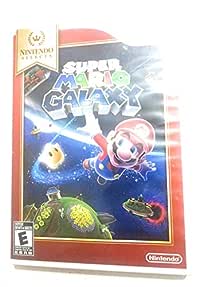 The ultimate Nintendo hero is taking the ultimate step into space! Become Mario as he traverses a galaxy of gravities! Travel in and out of gravitational fields by blasting from planet to planet and experience dizzying perspective shifts as you run upside-down through wild alien worlds that need to be seen to be believed. Shake it! Controlling Mario is as simple as can be with the Wii Remote and Nunchuk. Move Mario with the Control Stick and shake the Wii Remote to perform a spin move or cue Ring Stars that launch you to and from planetary objects. You can even point at bits of stardust to collect them or latch onto Beam Stars to blaze a magnetic trail through the heavens. Don't want to head into space alone? With a second Wii Remote, another player can play alongside you by pointing at and collecting bits of stardust, then launching them at enemies. Your friend can even sweep aside projectiles or stall enemies to help make Mario's adventure easier!

4.6 out of 5 stars
4.6 out of 5
1,072 global ratings
How are ratings calculated?
To calculate the overall star rating and percentage breakdown by star, we don’t use a simple average. Instead, our system considers things like how recent a review is and if the reviewer bought the item on Amazon. It also analyzes reviews to verify trustworthiness.

Femme
1.0 out of 5 stars Disc doesn't even run...
Reviewed in the United States on November 10, 2017
Verified Purchase
The game itself is wonderful, I couldn't be happier with the actual game experience, since I've played it before with a friend.

However, it arrived in a cheap case, and the disc was beaten up pretty badly. I figured it was worth a try and the disc didn't run. Needless to say, I'm pretty disappointed considering I paid for a disc that should've been at the very least playable. I'll have to get it re-surfaced and hope that makes a difference, but I'm not happy that this means I'll have to pay more out of pocket.

Anonymous
2.0 out of 5 stars Really disappointing for multiplayer
Reviewed in the United States on December 27, 2018
Verified Purchase
Purchased this game as a gift for a friend who likes to play multiplayer games. First time playing the game as two-player, we learned that the second person hardly gets to do anything at all.The first player controls the character, and the second player just has a little star on the screen that can do minimal things like make Mario jump if you point the star at him. Not fun at all as a two-player game. Might be fun as one-player, but we specifically wanted a two-player game.
Read more
3 people found this helpful
Helpful
Comment Report abuse

Jeff
5.0 out of 5 stars EXCELLENT MARIO GAME!!
Reviewed in the United States on February 12, 2020
Verified Purchase
Product shipped quickly and brand new as described. Super fun game! Our children love it. Took a little bit of time to get used to the camera angles. A must have for the Mario franchise enthusiast!
Read more
2 people found this helpful
Helpful
Comment Report abuse

Hondo
4.0 out of 5 stars Great Game for Single-Player Beginners
Reviewed in the United States on January 21, 2013
Verified Purchase
We're probably one of the few families left that haven't purchased a game console, but we finally broke down and purchased a WII for Christmas. I am aware of Nintendo's long history of Mario games, and thought SMG might be a fun introduction. While I thought it would be a fun game for our seven-year-old, unless your kids are hard-core gamers (and mine certainly are not), they'll probably find this game to be a challenge to play, and perhaps too frustrating. Probably better for someone older, perhaps a middle-schooler around 13 years of age. It's clearly a one-person game. I would think another gamer would only get in the way.

Since this was my first introduction to Mario games, I would have to say that so far, I've been gaining a lot of enjoyment from the game. There have been times that it's been frustrating, but that should be expected with any video game. The graphics are beautiful, the game play challenging (certainly for someone new like me that has no real sense of what a WII game can do), and the urge to play more is also certainly there. So I think as a game, it meets the bill for being really enjoyable, at least for a beginner like me.

I rated it one star short of five for one reason. There are a few spots in the game where it's very difficult to determine how you progress forward in the game. For example, I got to the five-pointed star part of the game and was totally stumped as to what to do next. I collected all five star pieces, but there was no clue whatsoever as to how I was supposed to progress from there. I finally broke down and went upstairs to the computer and posted the question in Google. This took me to a gaming forum populated by a bunch of elitest gamers (kids probably only a few years older than mine) who lambasted a poor poster who was trying to figure the game out like myself. After the gamers had slathered on the usual, boring hype about the poster being a "newb", not trying hard enough, clueless, etc. (I suppose that made them all feel very surpeior somehow), someone finally partially answered the question. You must place the star pointer over one star, then once Mario has been lifted to that star, point to the next, and then, when he's midway between the two, select a third star across the way to float him over the middle where the launch star was. A rather complex move, and certainly more the so since this is a new "move" introduced with absolutely no explanation about what to do. I was really stumped. I could get Mario to float up to the first floater star, but had no idea what to do next. I was also surprised at how harsh these little gamers are on these gaming boards. I've been a gamer since there WERE electronic games (anyone remember PONG?), perhaps they would like to discuss the finer points of the popular PC game Wolfstein? OHHH, wait! You guys weren't born then, were you?

Be that as it may, if you're new to WII and want to gain a sense of what this gaming system does, SMG is certainly a worthy entry in the world of Mario. It may not be the best. It may not be the end-all Mario game, but I'm sure you find it engaging and interesting.

Family Shoppers
1.0 out of 5 stars The one I got was not "new"
Reviewed in the United States on November 13, 2019
Verified Purchase
Not "New" as described. If I wanted something Used, I would have selected Used. This arrived in a box that was destroyed as if a dog had eaten it. The game itself was dusty and messy and to be honest, I didn't even try putting it in because I wanted something NEW to give as a gift. So we are returning this and I'm leary of purchasing again even though I see other versions now at a higher price than what I paid.
Read more

human
4.0 out of 5 stars As good as the second, better in some respects
Reviewed in the United States on June 2, 2013
Verified Purchase
I was happy to discover this price-reduced copy of the original Super Mario Galaxy game. Having played through and nearly finished Super Mario Galaxy 2, I wanted to return to this one, which I remember enjoying more, and see why I enjoyed it. Part of it is that I really enjoy the orbital platform design that Mario returns to after every galaxy. Jetting around the galaxy on a big, stupid-looking Mario head just own satisfactory to me. I like being able to come back to a home base every time. I also didn't like how SMG2, despite having the '2', is not a continuation of the first game's plot line, which I enjoy. There are problems with this title, though, that SMG2 fixed well. One of the problems is the horrible controls and camera position ing in the underwater levels--much of the time you can't see where you're going, because for whatever reason the camera movement is restricted to awkward viewpoints that make it very hard to see where you are going, making it very easy to run into unseen enemies . The controls for the underwater parts are terrible. In other places, the level design and controls are so bad that they remove all fun from the level, namely one level where Mario is forced to race a Boo through a pull star path. The pull star mechanic is fun and interesting, but too slow and clumsy to make for a decent race. Fortunately, it's easy to get enough bonus stars in other levels that you can manage to skip the not-fun levels and go on to something else. I'm about 75% of the way through the game and have mostly enjoyed it, though the controls are nowhere near as precise as Super Mario 3D Land, probably the best of the three-dimensional Mario titles available.
Read more
One person found this helpful
Helpful
Comment Report abuse

June
1.0 out of 5 stars Very much regret buying this one!
Reviewed in the United States on January 13, 2019
Verified Purchase
I bought this game for my eleven and a half year old daughter who loves video games. However, some parts of it are so hard for her that she cries and cries because she just cannot get them by herself.
Read more
2 people found this helpful
Helpful
Comment Report abuse
See all reviews

Freda Davis
5.0 out of 5 stars Exciting and fun to play. Never want to put the controller down
Reviewed in Canada on May 30, 2019
Verified Purchase
Very entertaining and keeps you busy and excited to get through to other levels. Keeps you thinking and moving. Will be anxwaiting for more games in the future
Read more
One person found this helpful
Report abuse

Ezekiel Morrow
5.0 out of 5 stars Perfect condition
Reviewed in Canada on May 15, 2020
Verified Purchase
Came with everything promised and was delivered in a timely manner. I love this game so much. It hold up to years of testing, and I am thankful I could get a replacement for the copy I had to let go of. Great price for a great game!
Read more
Report abuse