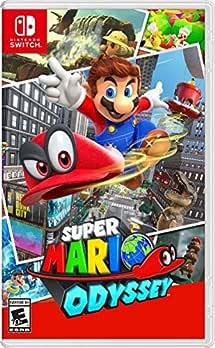 Share
Sell yours for a Gift Card
We'll buy it for up to $8.00
Learn More
Trade in now

Visit the Nintendo Store
Platform : Nintendo Switch |
Rated: Everyone 10+
4.9 out of 5 stars 16,635 ratings
#1 Best Seller in Nintendo Switch Games
Available at a lower price from other sellers that may not offer free Prime shipping.
In Stock.
Arrives: Sunday, Jan 31 Details
Fastest delivery: Thursday, Jan 28
Order within 9 hrs and 36 mins Details
Ships from and sold by Amazon.com.
New & Used (113) from $34.99 + $3.99 shipping

Embark on a cap-tivating, globe-trotting adventure

Explore incredible places far from the Mushroom Kingdom as you join Mario and his ally Cappy on a massive, globe-trotting 3D adventure. Use amazing abilities like the power to capture and control objects, animals, and enemies to collect Power Moons so you can power up the Odyssey airship and save Princess Peach from Bowser’s wedding plans.

Thanks to heroic, hat-shaped Cappy, Mario’s got moves that’ll make you rethink his traditional run-and-jump gameplay like cap jump, cap throw, and capture. Use captured cohorts such as enemies, objects, and animals to progress through the game and uncover loads of hidden collectibles. And if you feel like playing with a friend, just pass them a Joy-Con controller! Player 1 controls Mario while Player 2 controls Cappy. This sandbox-style 3D Mario adventure the first since 1996’s beloved Super Mario 64 and 2002’s Nintendo GameCube classic Super Mario Sunshine is packed with secrets and surprises, plus exciting kingdoms to explore.

Embark on a cap-tivating, globe-trotting adventure!

Join Mario on a massive, globe-trotting 3D adventure and use his incredible new abilities to collect Moons so you can power up your airship, the Odyssey, and rescue Princess Peach from Bowser's wedding plans! This sandbox-style 3D Mario adventure—the first since 1996's beloved Super Mario 64 and 2002's Nintendo GameCube classic Super Mario Sunshine—is packed with secrets and surprises, and with Mario's new moves like cap throw, cap jump, and capture, you'll have fun and exciting gameplay experiences unlike anything you've enjoyed in a Mario game before. Get ready to be whisked away to strange and amazing places far from the Mushroom Kingdom!

4.9 out of 5 stars
4.9 out of 5
16,635 global ratings
How are ratings calculated?
To calculate the overall star rating and percentage breakdown by star, we don’t use a simple average. Instead, our system considers things like how recent a review is and if the reviewer bought the item on Amazon. It also analyzes reviews to verify trustworthiness.

Cristopher Boyer
5.0 out of 5 stars Nintendo hits a real homer with this Odyssey
Reviewed in the United States on December 6, 2017
Verified Purchase
While it may sound backhanded to say that this is the best Mario game since Galaxy, it's not intended as such. Odyssey is spectacular. I've been playing Mario games since the very beginning, so I like to think I know a thing or two about them. Super Mario Odyssey may well be the best 3D Mario game ever made, and it's in my personal top 3 Mario games of all time.

As you might've seen advertised, the big new feature is Mario's sentient hat companion Cappy, who lets him possess many of the denizens of the various kingdoms you visit in this adventure. While the highlight of many Super Mario games throughout the years has always been the various suits and power-ups players can get their hands on, being able to outright become many of the creatures you come across is a twist on that formula that lets players do all kinds of new and sometimes unexpected things.

While the game is - as expected - family friendly, it provides layers of challenges for players of all ages. Some of the (optional) tasks in the game are outright hair-tearing, for only the most skilled players, but that's part of what achievement is all about! However, while the game is designed to appeal to everyone, Nintendo took the time to add some extra nods to long-time fans, not only in the worlds and the critters/characters you happen across, but through setpieces and a spectacular mid-game musical number that old-timers like me have to appreciate.

Harrison Whitebread
5.0 out of 5 stars True, Genuine Inspiration
Reviewed in the United States on February 13, 2018
Verified Purchase
This is our first Switch game - my little sister and I have squeezed many hours of co-op as both Mario and Cappy, with many more to go. Such a creative game with such accessible puzzles for all ages, even adults. The music is so wonderful and the environments are spectacular. The controls couldn't be simpler and you know, playing with another person gives you more moves to do with Mario and Cappy. I cannot remember the last time I played a game where playing co-op gave you an advantage other than replacing a buggy AI with a human player. It makes so much sense! There's a true motivation to play with someone else - and not ONLINE.

I must say the graphics in Odyssey are gorgeous, far beyond anything out of PS4 or Xbox One. Seriously. It's colorful, vibrant, and deep. Rich hues supplant dullness, even when in areas portrayed to be mysterious or cold. It's just short of inducing synesthesia.

I'm so glad Nintendo is finally back! This is the way gaming is supposed to be - light, endlessly fun and inspiring! Too many games on the "Big Bad Consoles" are so dark or filled with such negativity - it brings you down without realizing it. Even the "fun" titles are just uninspired - they just lack character & development. This Odyssey is such a breath of fresh air - it makes me want to just JUMP UP and go get Breath of the Wild next. Actually, it makes me and my sister just excited about everything, even when we aren't playing the game. We're happier individuals for playing Odyssey, no joke.

Nintendo, you've nailed it with the Switch and brought back the joys of gaming to a faithful 90's kid while giving the up and coming younger generation the discovery of something that has been missing from gaming for over 20 years - true, genuine inspiration.
Read more
91 people found this helpful
Helpful
Report abuse

J. Bradford
5.0 out of 5 stars Fun for the Family
Reviewed in the United States on October 27, 2017
Verified Purchase
My review is from the "father of a toddler" perspective. For those of you who have a child on the younger side, and you still enjoy Mario, don't hesitate to buy this game! My son can sit and watch this as if it is a cartoon and remains entertained the entire time. Sometimes he will say "make Mario do this" and is excited when it happens on screen. As someone who is a bit older but still enjoys games, it is a treat to find a game that entertains my son while I play.
Read more
496 people found this helpful
Helpful
Report abuse

TheCyberQuake
5.0 out of 5 stars Honestly you need this game
Reviewed in the United States on November 2, 2017
Verified Purchase
Honestly this is my favorite console title to date. Very few games make me want to sit and play for hours on end. Even with Breath of the Wild, I haven't beaten it and can't get myself to play for extended periods of time.
But this game is glorious.
I'll leave this review spoiler free for the sake of those looking into purchasing this awesome title.
It took me about 4 days to beat the main story. This included getting 8 hours of sleep and a work/school schedule. But that was using all of my free time playing this fantastic game. And even after that, there is still a LOT to do after the main story, so I've been playing it still.
This is a console quality mario game. In my opinion it's the best 3d open-world mario title to date. Mario 64 will always have that nostaliga spot for me, but this is the new winner in my eyes. Not only because of the gameplay, but with the nature of the switch it's also a portable title. I played this while waiting at campus for a class to start. Almost was late to class because I lost track of time.
And the mechanics are great. Even after beating the main story, I find myself learning new advanced moves that make previously tall walls easy to get over.
The music is also good. Not all of it is super memorable, but there are several songs in there that I would pay to have downloaded on my phone.
I highly recommend anyone who is even remotely considering this game to pick it up. I wasn't even super excited to get it, but decided to give it a go and now it's my new gaming addiction.
Read more
94 people found this helpful
Helpful
Report abuse
See all reviews

Junto a The Legend of Zelda Breath of the Wild, los mejores juegos del 2017. Totalmente recomendado.

Junto a The Legend of Zelda Breath of the Wild, los mejores juegos del 2017. Totalmente recomendado.