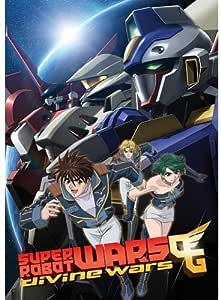 The Space Era has begun, and human civilization expands into space. By the start of the 21st century, two meteors strike the planet, sending humanity into
chaos. By year 179 of the Space Era, secret technology dubbed Extra-Over Technology or EOT, is discovered by the Earth Federal Government within a third meteor that hits Earth in the Marquesas Islands of the South Pacific.

Dr. Zoldark, head of the EOTI Institute (Extra-Over Technological Investigative Institute), has evidence that the creators of the EOT were heading to Earth in order to reclaim it ... or worse, invade the planet. In order to defend humanity from extraterrestrial
threats, the government begins to research and develop humanoid mecha called Personal Troopers, and the battle begins!

BASED ON THE POPULAR SUPER ROBOT VIDEO GAME

eddie wright
4.0 out of 5 stars Four Stars
Reviewed in the United States on November 2, 2015
Verified Purchase
To bad it was not in English.
Read more
Helpful
Comment Report abuse

Michael Glick
1.0 out of 5 stars Beware defective discs
Reviewed in the United States on May 28, 2014
Being a fan of the games, I had waited patiently for this for over a year, as the release date was pushed back a whopping 10 months. I would have hoped they could fix any problems in that time, and would have also preferred my review to be about the series and not the discs. Sadly, that cannot be so.

While the first four discs were fine, as was the first 60% of the fifth. Episode 25 started with scenes from episode 24, and then graduated to having an audio track well removed (I would guess minutes off) from the visuals. This problem remained throughout episodes 25 and 26, and basically made them unwatchable.

While a decent series, anything good I could write about it is more than countered by the fact that, at least with these discs, the finale is so screwed up.