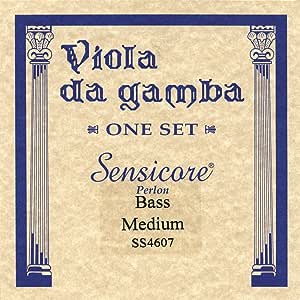 Scott Schwartz
5.0 out of 5 stars I like 'em
Reviewed in the United States on September 26, 2009
With all due respect to the other review, I had a very different and far more positive experience with these strings. I have two custom Gambas, built in 1971 & 1972, as well as a 5-string fidel built in 1993. I put Pirastros on the Gambas when I first got them, and the strings started to unravel within 3 weeks and several broke within a month. Shortly thereafter, I put Sensicores on, and have NEVER needed to change them to this day! Not one broke or unraveled. On the fidel, one broke at the nut, but there was a small edge, that, once filed, has not sacrificed any strings at all, and they have been played at many concerts, including the White House in 1977. Several possible factors: My gambas are a tad smaller than full-size, measured from a Division Viol, so the tension is less. In addition, after my initial gut-wrenching expenses(Sorry!), I got light rather than medium-gauge strings. They give a great sustain, a very quick response, and at nearly 40 years of age, are easy on the pocket. It's been said by some others that these strings are badly made, but I have had some serious Viol-players from England and America try the gambas and they all felt the sensitivity and response were astounding. Go figure!
Read more
4 people found this helpful
Helpful
Comment Report abuse

Mary Ann Tavery
5.0 out of 5 stars Best Gamba Strings for four reasons
Reviewed in the United States on January 15, 2020
These are the best gamba strings you can get for the following reasons:

1. They have a bright crisp sound.
2. They cost much less.
3. They last longer.
4. They stay in tune longer, especially if you use pegheds.
I have 15 gambas and I use them on all gambas.

P. Gardner
2.0 out of 5 stars Save your money for some decent strings
Reviewed in the United States on June 3, 2009
I thought I would give these Sensicore strings a try since they are so much cheaper than others. Of the six strings, I only kept 3 on my bass viol. The high D and low D strings may earn 3 or 4 stars. At first, I had hopes for the E string which is always a difficult string. However, it came unwound after 3 or 4 months. The C string was the worst. It was literally unplayable so I sent it back. The company replaced it even though that was against their policy. The replacement string was not much better. I ended up replacing the G, C, and A strings with my old strings within a couple days. Now I wish I had that money to put toward a decent set of strings.
Read more
One person found this helpful
Helpful
Comment Report abuse